She bathed in diamonds, ran through a graveyard and writhed on a golden throne of snakes in the explosive clip for her comeback track Look What You Made Me Do. But Taylor Swift seemed to favour a more urban vision for her latest music video, which saw her shooting in the rather humble surroundings of a kebab shop in London. The pop sensation, 27, channeled a grungy Eighties look with an oversized baseball jacket and fishnets while surrounded by dancers during the 3am shoot on Friday.

Taylor took centre-stage with her provocative look, showcasing her lithe legs in a thigh-grazing printed black minidress. Injecting the ensemble with a rocker chick vibe, she completed the look with some heavy-duty buckled biker boots. 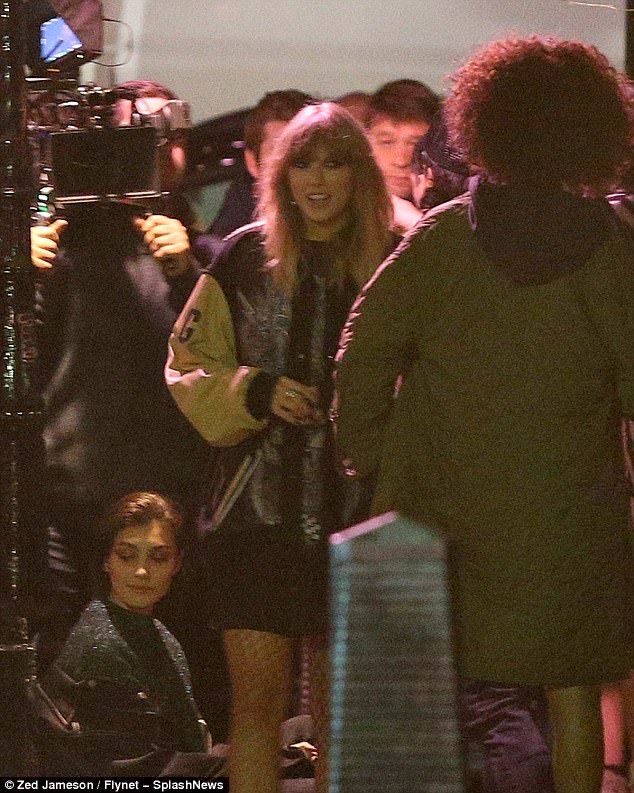 Letting her statement outfit do the talking, the Blank Space singer accessorised with a smattering of silver rings and some subtle earrings.  Swift appeared to be in great spirits as she chatted to dancers in between takes on the packed set. 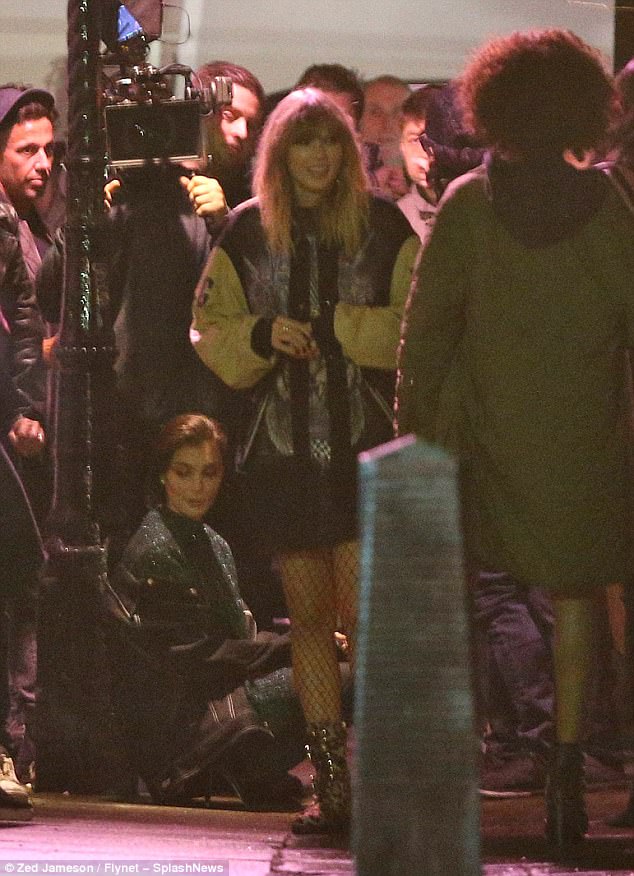 Ensuring the star wasn’t mobbed by fans during the early morning filming, the set was carefully guarded by policemen in high-vis jackets. Taylor is well known for shooting glamorous and high production music videos like Look What You Made Me Do. The pop star goes about slaying various public perceptions of herself in the explosive video, from upcoming album Reputation. 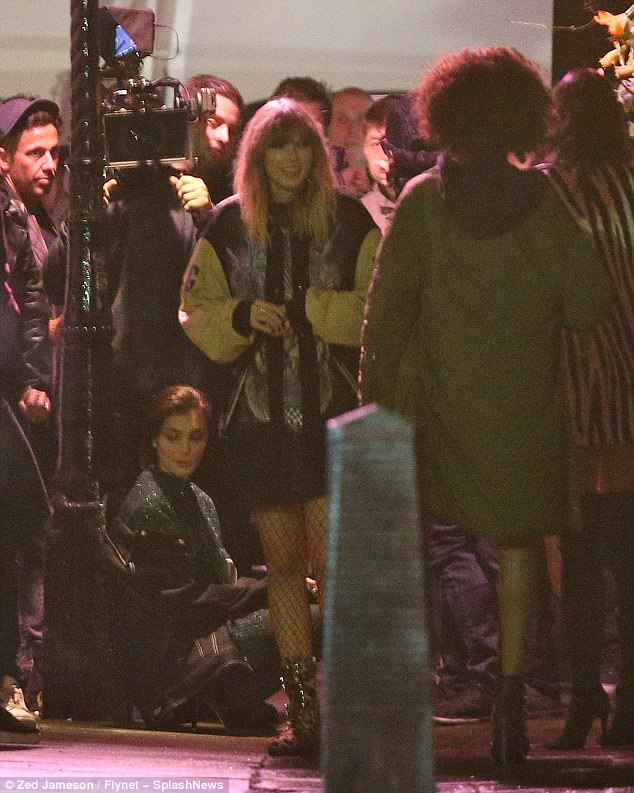 In a clear swipe at her critics, she poked fun at her ‘reputation’ as the serial monogamist, the heartless publicity hound, and the good girl in the darkly satirical video. But most telling were her digs at ex Tom Hiddleston and frenemy Katy Perry along with some serious venom for Kim Kardashian. Various hidden messages were clearly buried in the video, the first comes right at the beginning as a zombie version of Taylor claws her way out of a grave. 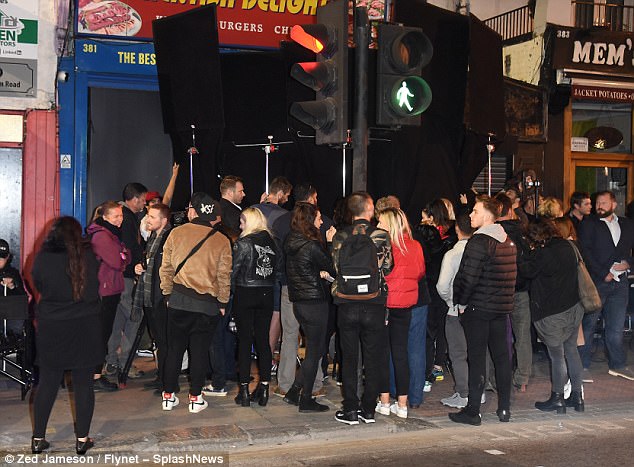 The tombstone next to hers bears the name of the pseudonym she used for a song she wrote for ex Calvin Harris, Nils Sjöberg. 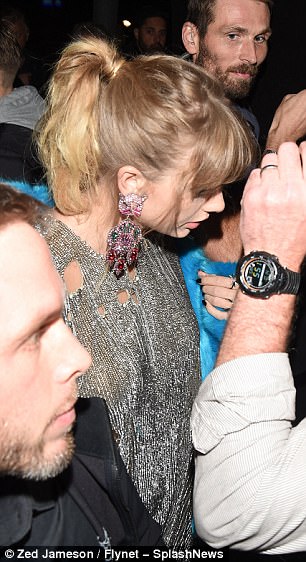 At the time Calvin had denied his girlfriend Taylor had written his hit This is What You Came For, only for her authorship to be revealed after their relationship ended. 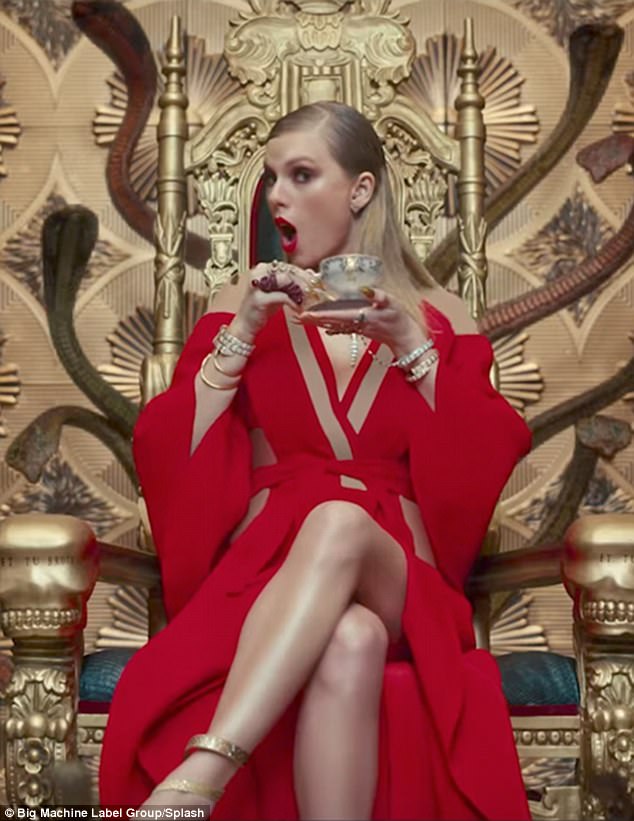 Nils Sjöberg was the moniker she used to be listed in the songwriting credits.  Meanwhile, Taylor has scooped jaw-dropping five nominations for the upcoming 2017 MYV EMAs. She will go head- to-head with Ariana Grande, Ed Sheeran, Kendrick Lamar, Miley Cyrus and Shawn Mendes for Best Artist. 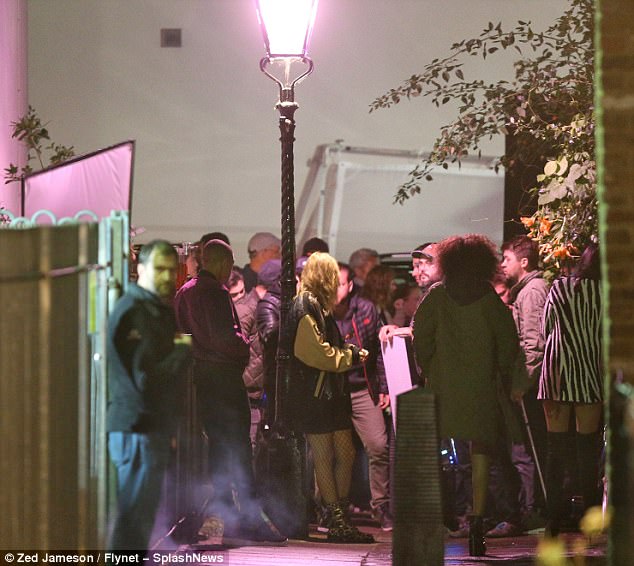 And battling it out for Best Look, Taylor will one again go up against Dua Lipa, Harry Styles, Rita Ora and surprise newcomer ZAYN. 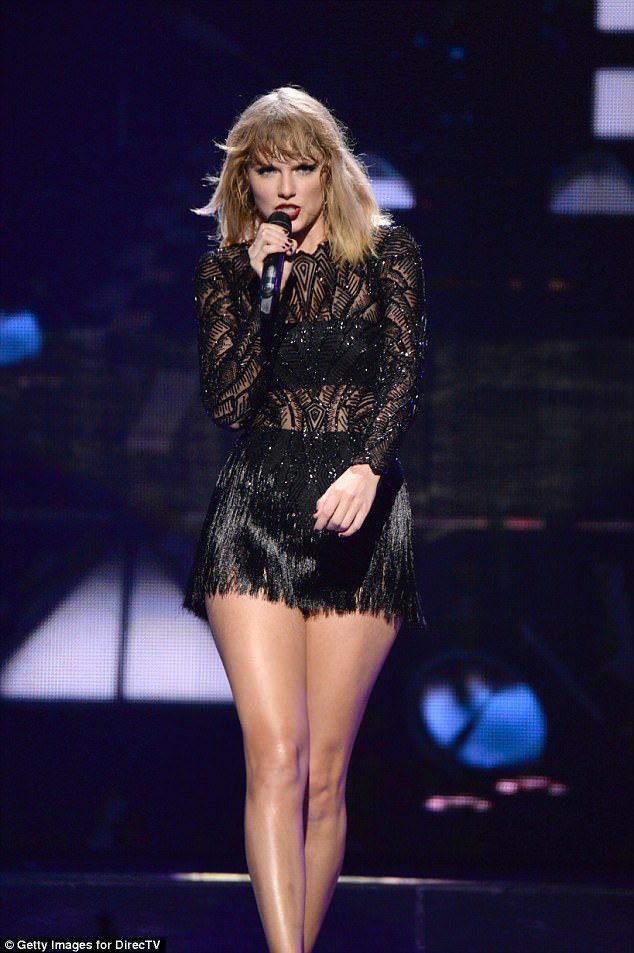 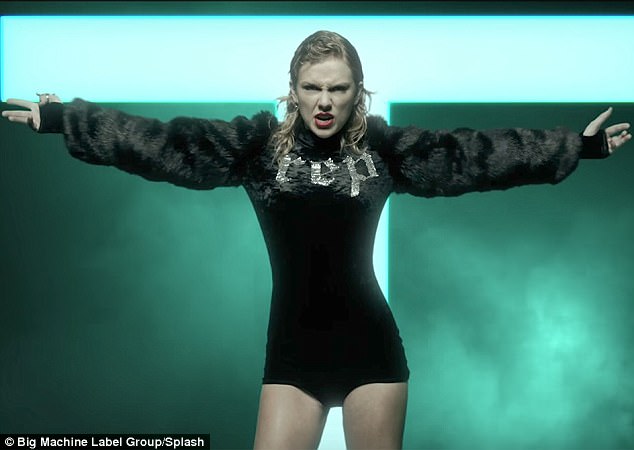 Not content with those nominations, Shake it Off hitmaker Taylor is also in the running for Best Video for Look What You Made Me Do, alongside Foo Fighters for Run, Katy Perry for Bon Appétit ft. Migos, Kendrick Lamar for HUMBLE and KYLE for iSpy ft. Lil Yachty, which sees their heads superimposed on children. 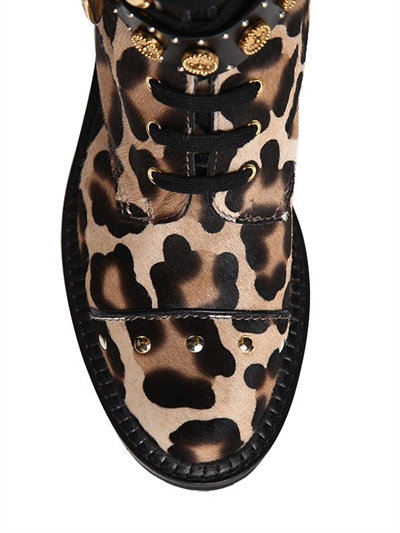 Channelling grungy eighties vibes, the singer was pictured wearing an oversized bomber with a mini dress and fishnet tights – but check out her awesome boots! Part of Fusto Puglisi’s current collection, these ponyskin leopard combat boots feature decorative buckles and studs, creating an all-over eye-catching design. Not only do these look incredible, they are super comfortable too, thanks to their chunky rubber sole. 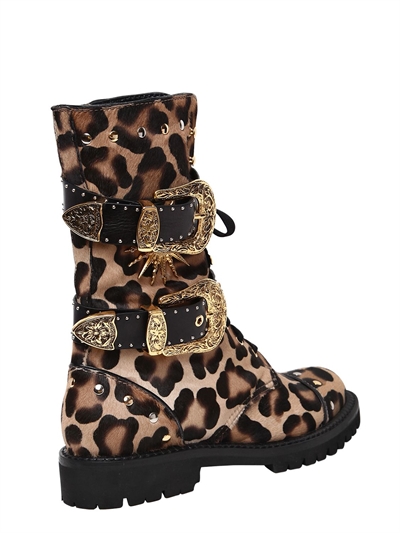 Although these boots come in at a pricey $1387, we can see them being worn day and night, with everything from skinny jeans to LBDs. We think that’s money well spent! Click (Buy) to snap them from Luisa Via Roma. 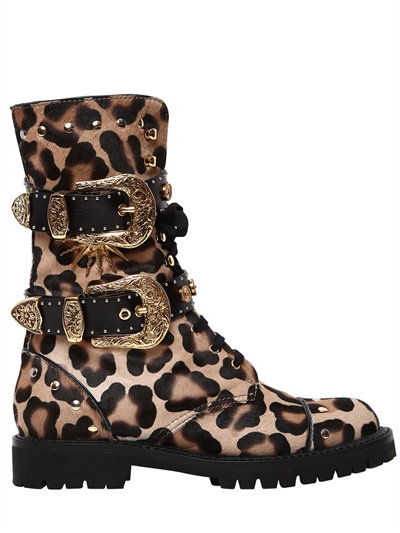 Or if you want to steal Taylor’s style for less, our edit below is the place to go. Here, we’ve rounded up wild picks from a range of brands: 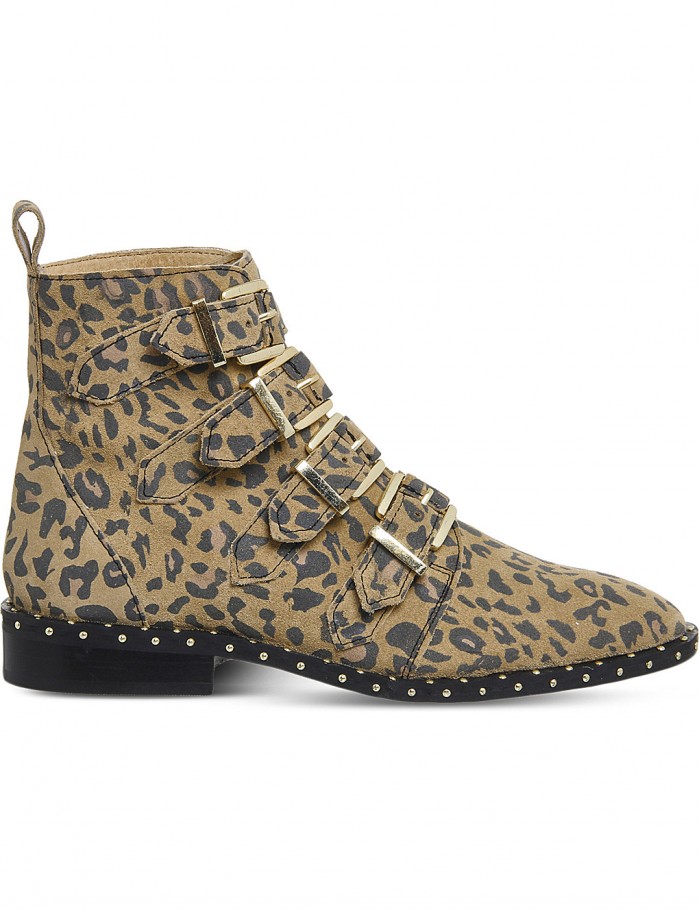 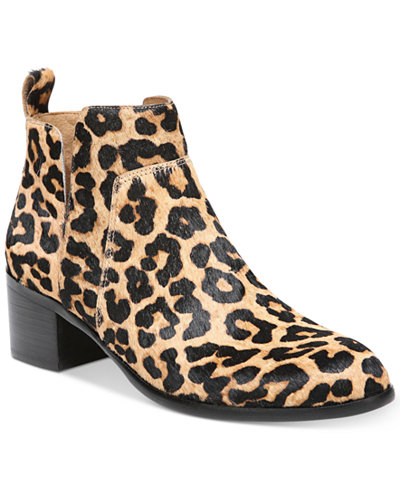