She dazzled on the catwalk as she walked for Alexander Wang’s star studded show during New York Fashion Week on Saturday.  And Suki Waterhouse, 25, showed what a difference an hour makes as she was spotted putting on a slightly less glamorous appearance before she took to the runway.  The striking starlet sported an array of colourful hairclips and donned comfortable flip-flops as she waited for her pedicure to dry before the glittering spectacular began. 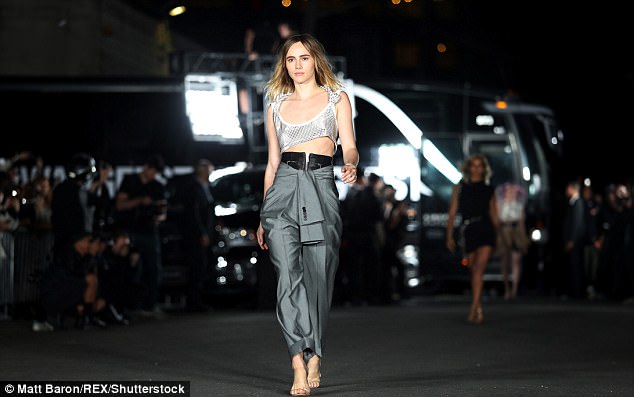 Looking content and happy as she worked the off-duty look, the star was also clad in a slouchy ebony sweater and white joggers as she chatted with pals and whiled away the time before her locks were styled. Proving the key is success is in the preparation, the star later wowed as she went braless and flashed her toned abs in a tiny crop top on the runway, which was cut low to expose her decolletage. 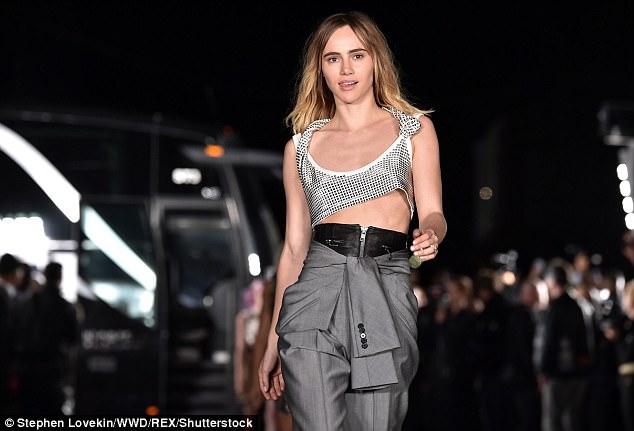 Playing up to her cheeky personality, Suki was seen to jokingly poke her tongue out at the FROW as she strutted down the catwalk in her ensemble which also included a quirky pair of suit trousers. Her crop top was adorned with silver sequins, and glittered under the bright lights of the runway as she worked her way down it. 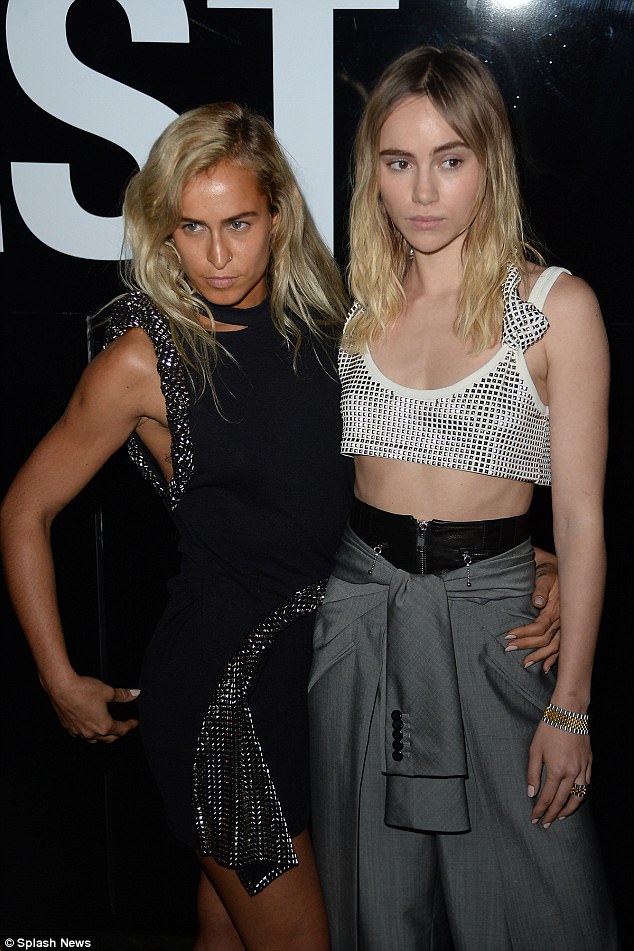 A pair of black leather shorts were just seen over the top of her trousers, featuring a sultry silver zip down the middle. Suki’s trousers consisted of a grey satin finish suit knotted at her waist, the sleeves of which hung to formulate a belt. She sported minimal make-up, giving prominence to her glowing complexion, with her trademark dark brows. Her rooted blonde hair was left tousled in a centre parting, framing her pretty face as she sashayed down the runway. 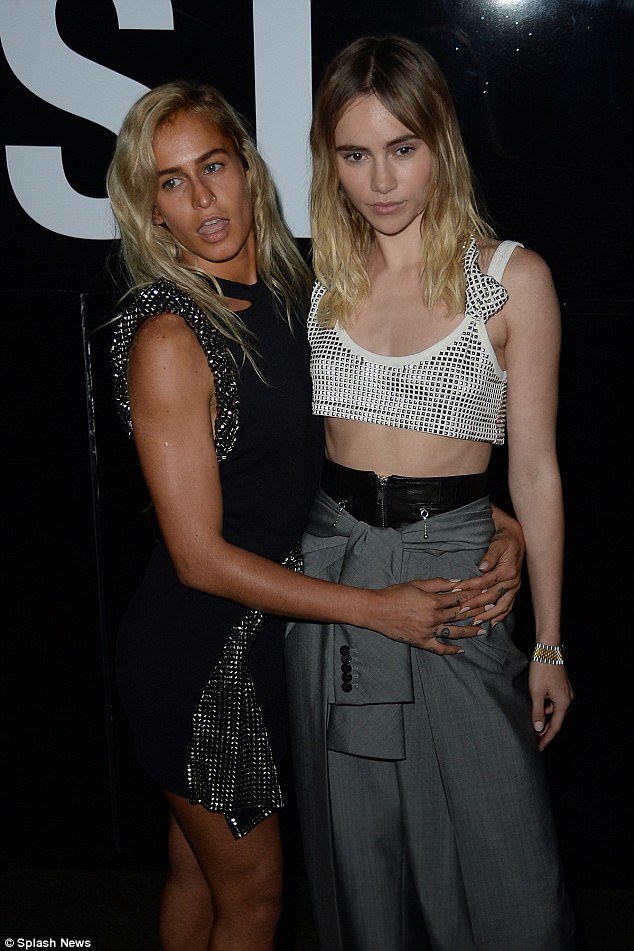 Meanwhile, Suki has been completely in her element during New York Fashion Week. And she was out flying the flag for British beauty when she sexed up her girl-next-door good looks on her walk around New York City on Saturday. Preparing for some of the hottest fashion events of the year, the model showed off her tiny waist in the lace-up corset for the ultimate drama. 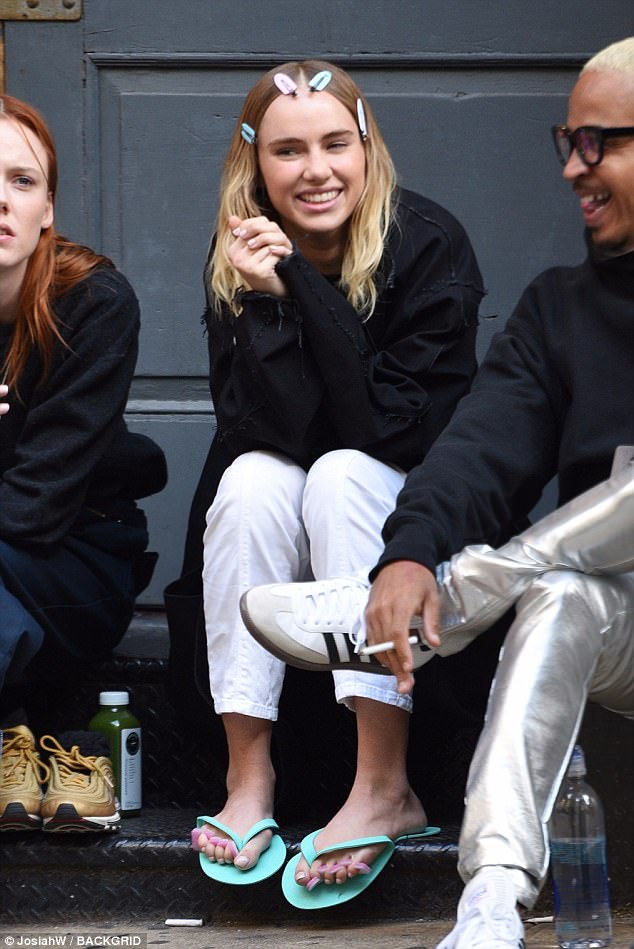 Smartening up, the entrepreneur threw on a vivid tailored blue blazer and it proved to be a striking contrast to her white garments.  The White Princess actress opted for a tomboy chic appeal and accessorised with a black grandfather hat as well as on-trend circular framed sunglasses. Embracing her waves, the Pride and Prejudice and Zombies star wore her golden locks in its natural choppy layered style as she left her hotel for the afternoon. The catwalk queen proved she had an eye for fashion even when she is off the red carpet when she sashayed out in chunky army boots. 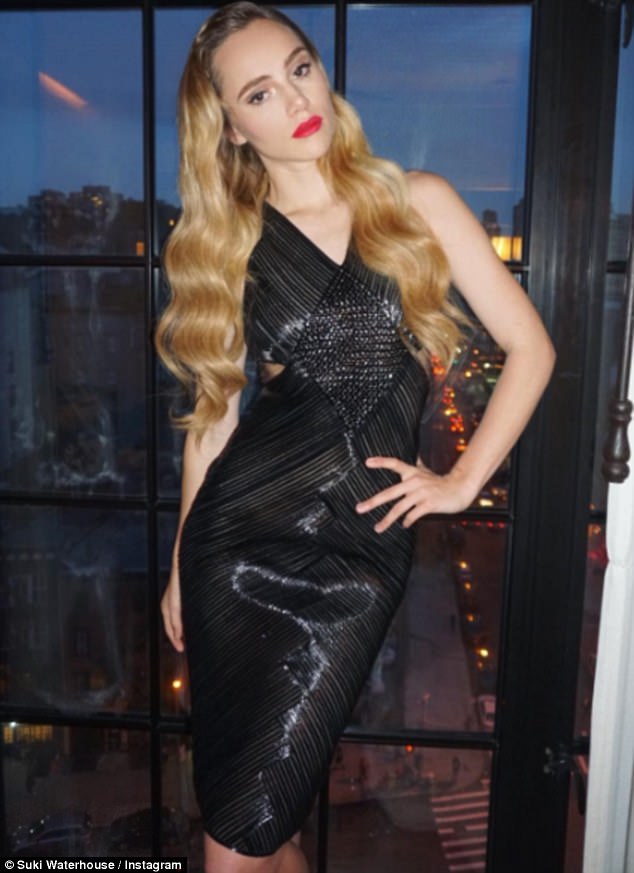 New York Fashion Week runs from the 7th to the 13th of September. The fashion parade is held twice a year in February and September. As for romance, Suki was spotted leaving a New York Fashion Week bash with a mystery man earlier this week.  Previously, she has been linked to Mexican actor Diego Luna since January, when they were seen looking cosy during a sun-soaked break in Mexico. 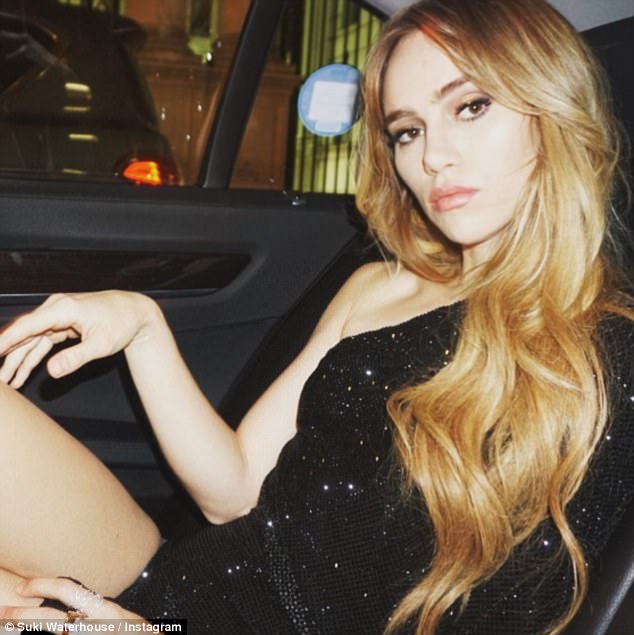 After months of laying low, Suki was then seen spending a week in the Big Apple with the Rogue One actor in June which rekindled rumours of a romance. The pair have never confirmed their relationship status. MailOnline has contacted their representatives for comment. Prior to Diego, Suki enjoyed a two-year romance with The Hangover star Bradley Cooper but the former flames parted ways in 2015. 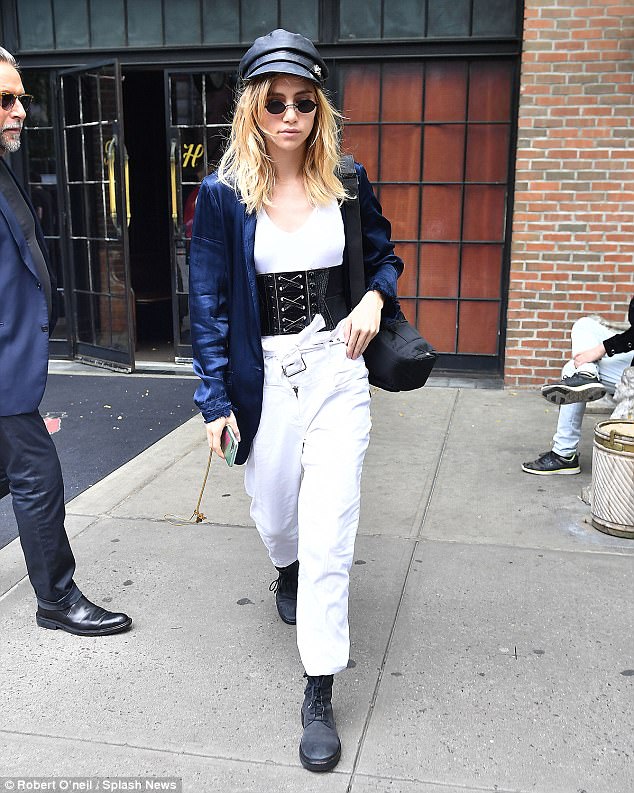 At the time, a source told E! News: ‘They both want different things right now. ‘She loves Bradley and he loves her but she’s so young and wants to concentrate on her acting career before becoming a mum.’ Bradley has since gone on to welcome his first child with Victoria’s Secret model Irina Shayk – a daughter Lea, born in March this year. 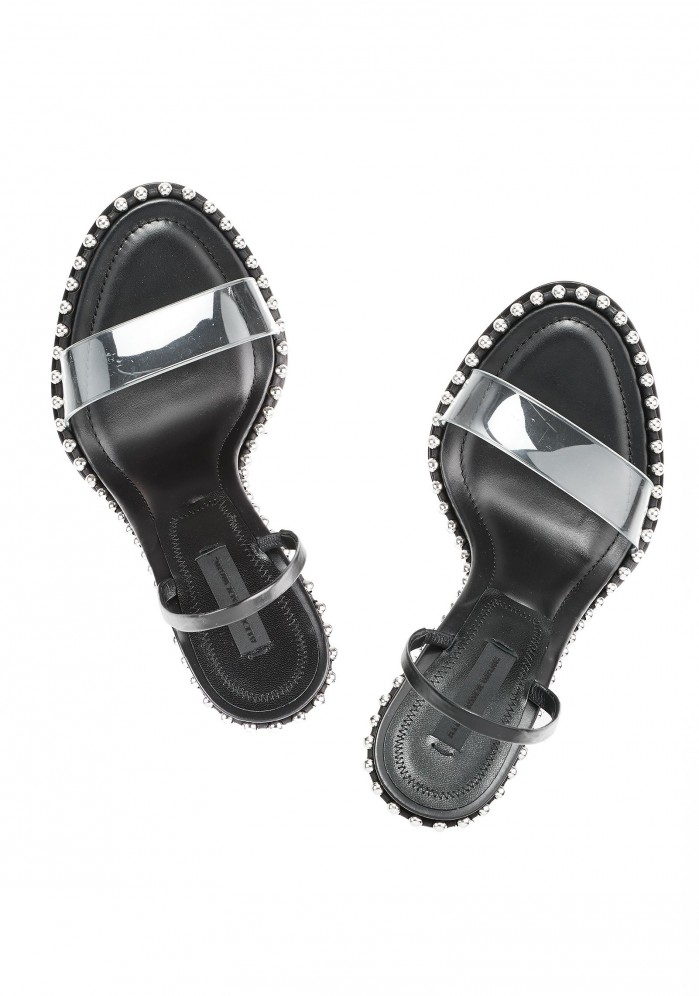 In an elegant nude shade, and with a delicate stiletto heel, these barely there sandals should be at the top of every fashionista’s ‘to buy’ lists! 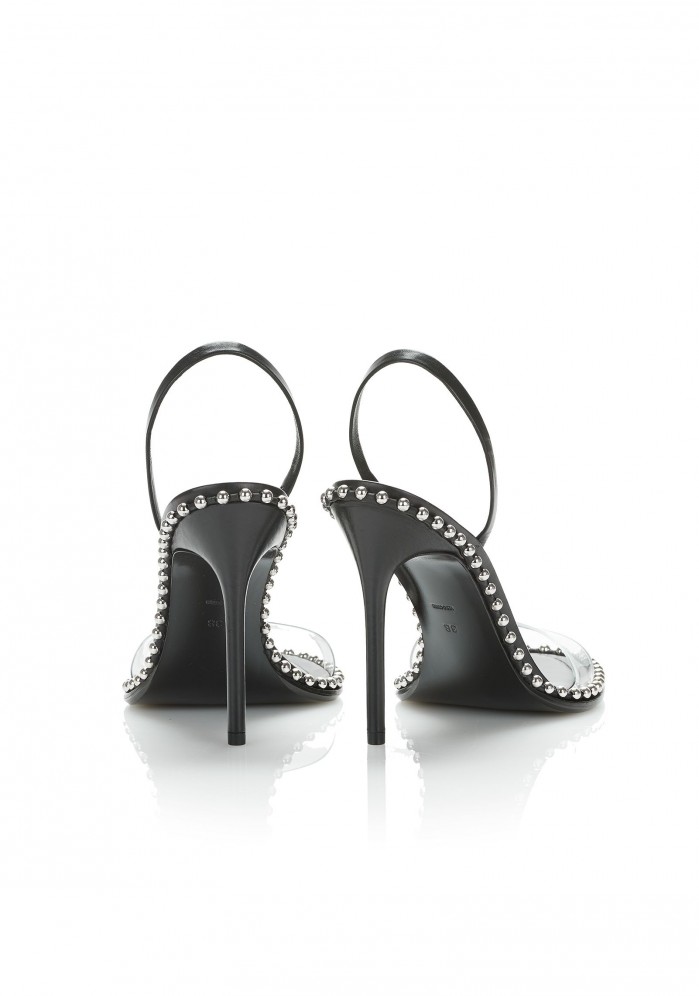 Want to steal Suki’s style before the Alexander Wang heels land in stores? Try our edit of (affordable) alternatives below: 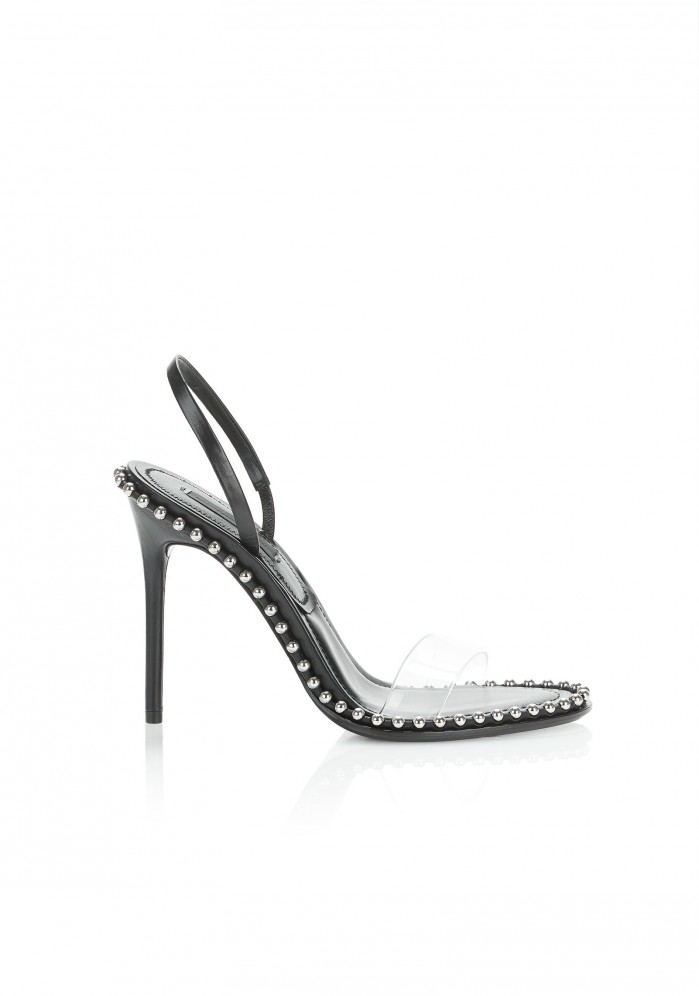 All in the same versatile nude shade, it’ll be hard to tell the difference between our picks and Suki’s! 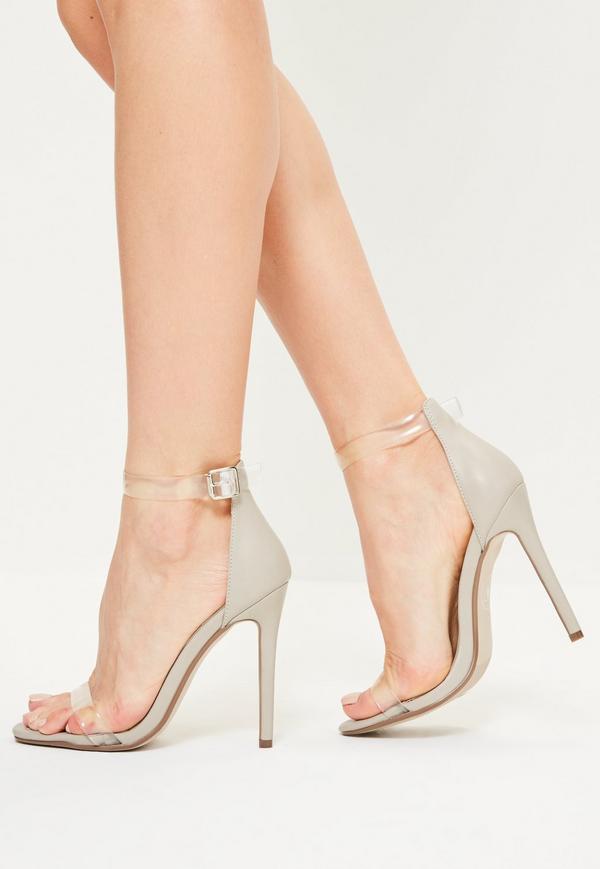 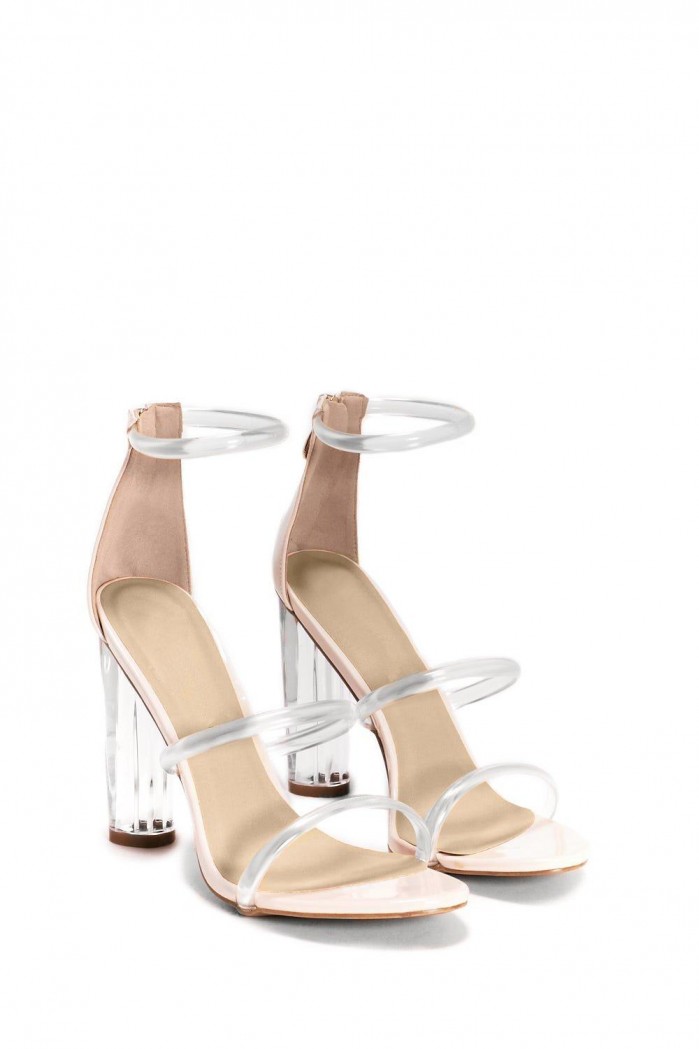