Stand out with studs like Kate in her Lasula wedges

Stand out with studs like Kate in her Lasula wedges

She has recently faced backlash from trolls on social media, after being pictured with rumoured love interest Rio Ferdinand for the first time. But Kate Wright put on a brave face against her haters on Friday afternoon, as she glamorously stepped out to run some errands in her stomping ground of Essex. The blonde beauty, 25, oozed confidence and elegance in a chic bardot blouse and skinny jeans, as she headed out for her day – without the former footballer, 38, by her side. 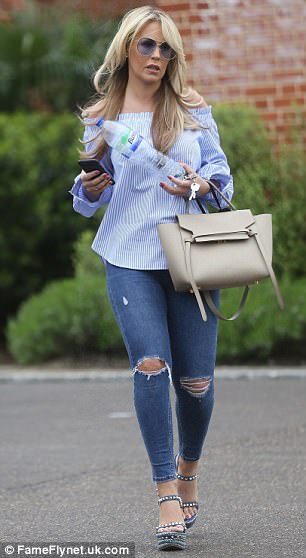 The reality star appeared calm and collected as she embarked on an afternoon out, in her casually chic ensemble. 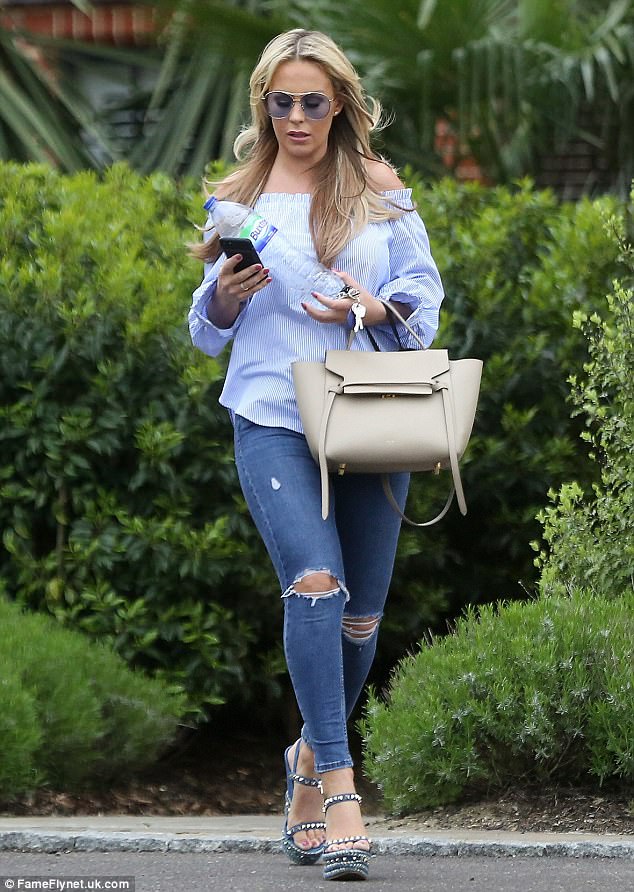 Cutting straight across the shoulders, her stylish blouse gave a sexy glimpse of her decolletage before extending down into soft blue and white stripes. Keeping her look low-key amid her recent backlash, Kate simply paired the top with figure-hugging blue jeans, which were ripped at the knee for a grungy touch. 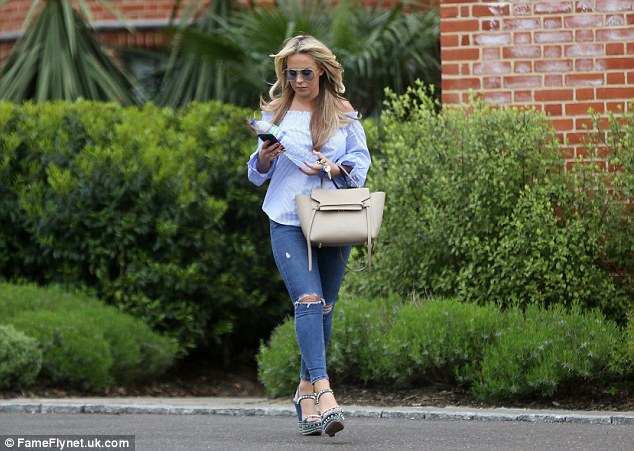 Maintaining a hint of her trademark Essex glamour, she accessorised with sky-high studded heels, to add height to her already leggy frame, and a sleek grey leather handbag draped across one arm. 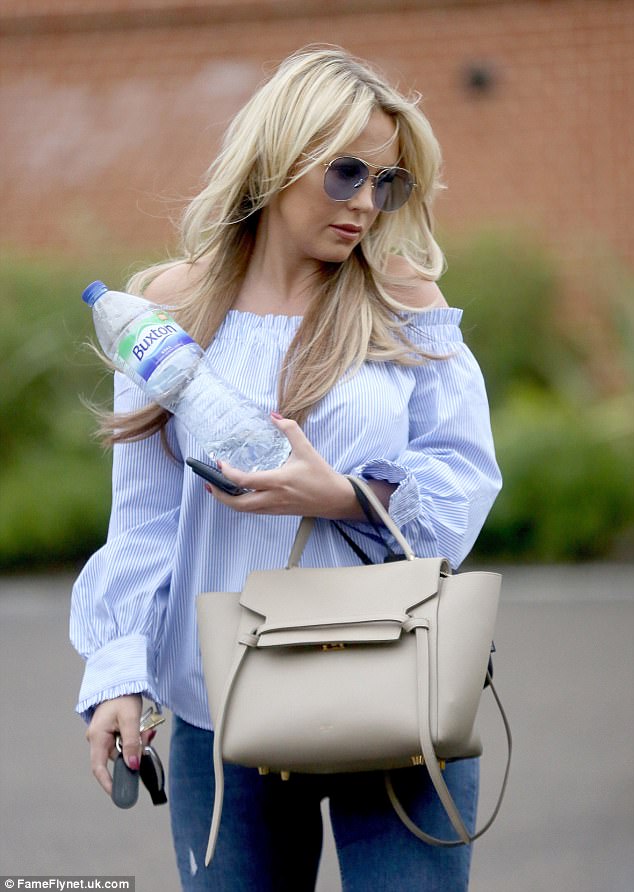 Leaving her hair in her trademark bouncy blow dry and adding a co-ordinating pair of blue Aviator shades, Kate was every inch the blonde bombshell as she embarked on her chores run. Clearly ready for a busy afternoon, the ITVBe star carried a large bottle of water with her and remained focused on her phone as she headed to her car.Kate looked confident and collected as she headed out for the first time since being pictured with Rio Ferdinand – who she is rumored to be dating. However has been a tough 24 hours for the reality star who, after stepping out with the footballer on Thursday, has since faced cruel trolls on social media. 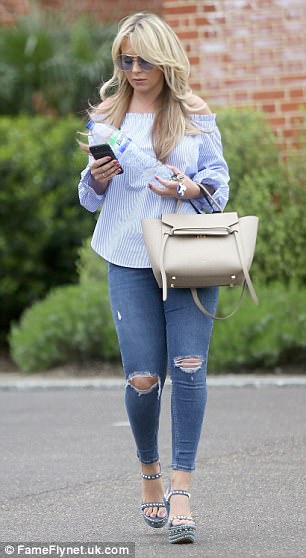 Reality star Kate is taking an ‘extended break’ after the current series of the show wraps after starring in the show since October 2015. A spokesperson for The Only Way Is Essex told MailOnline: ‘Kate has informed producers that she may take an extended break after filming for this series wraps. ‘We fully support this decision and will keep in close contact with Kate so we can mutually decide if and when a return is appropriate. We wish her well in her future projects.’ 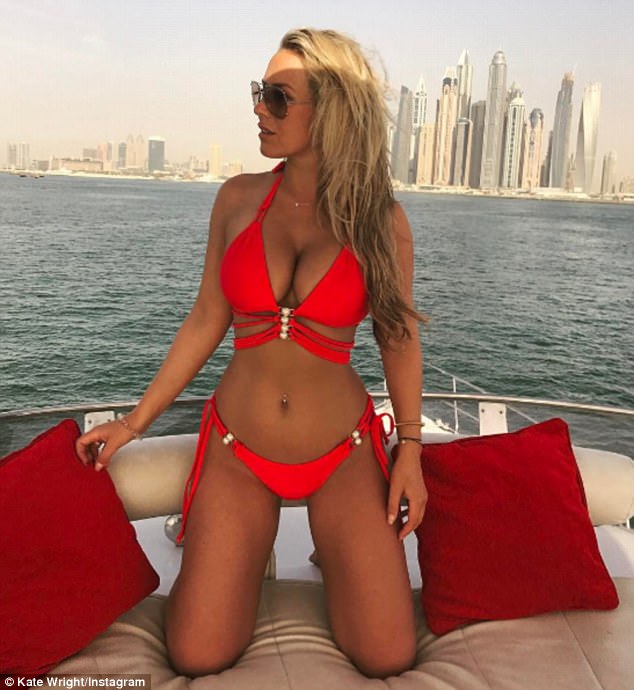 News that Kate is deciding to step away from TOWIE comes after she was said to have ‘enjoyed a string of dates’ with former footballer Rio Ferdinand during her getaway to Dubai. She had ventured overseas with a bevy of girlfriends, but reportedly enjoyed secret dates with Rio – with the pair having fun at a pool party together.  A source told MailOnline exclusively: ‘Kate was there last week and Rio happened to be there at the same time with his footballing commitments. They met up secretly a couple of times while they were there.’ A representative for Kate, meanwhile, told MailOnline: ‘Kate went to Dubai for her friend’s hen party. There is no further comment.’ 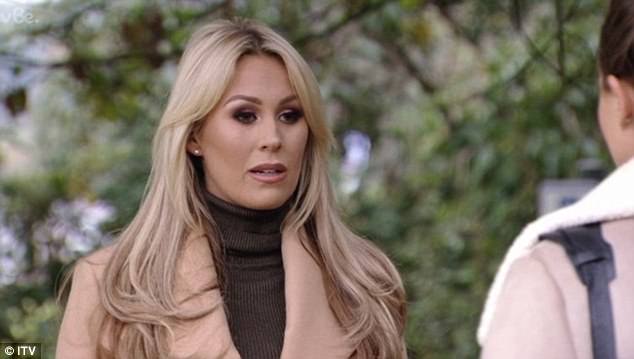 She was first romantically linked to Rio back in January, but the duo have apparently gone to great lengths to keep their numerous reported rendezvous under wraps. Neither have confirmed the romance. MailOnline has also contacted a spokesperson for Rio Ferdinand for comment. Manchester United legend Rio – who lost his late wife Rebecca to cancer in 2015 -had travelled to the UAE for a Football Escapes training session with children at the Jumeirah Beach Hotel in Dubai. He was joined by West Ham United player Bobby Zamora. 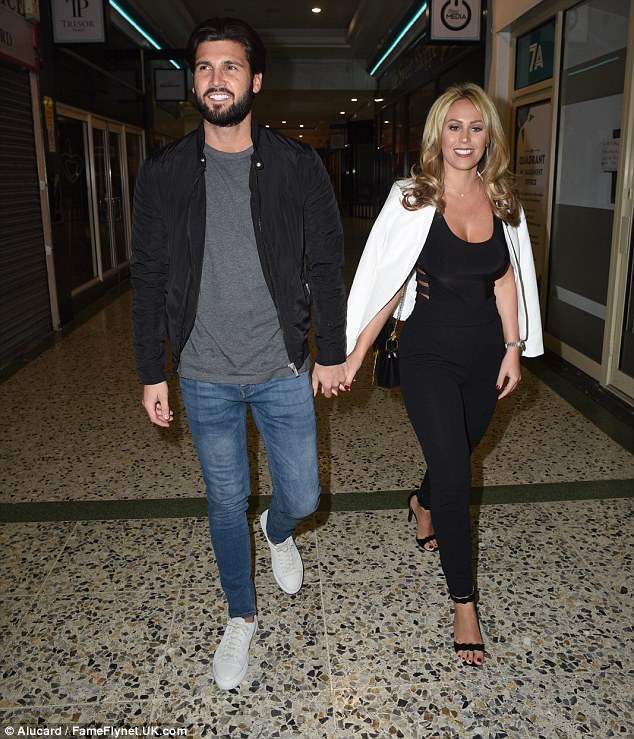 Kate, meanwhile, previously dated her co-star Dan Edgar. They had been in a relationship when he first joined TOWIE – two series before she did – in 2015. But their relationship broke down after he was seen turning his attentions to Jessica Wright.  While viewers did see the pair get back together on the show, their romance was on and off and the pair finally called it quits before Christmas last year. 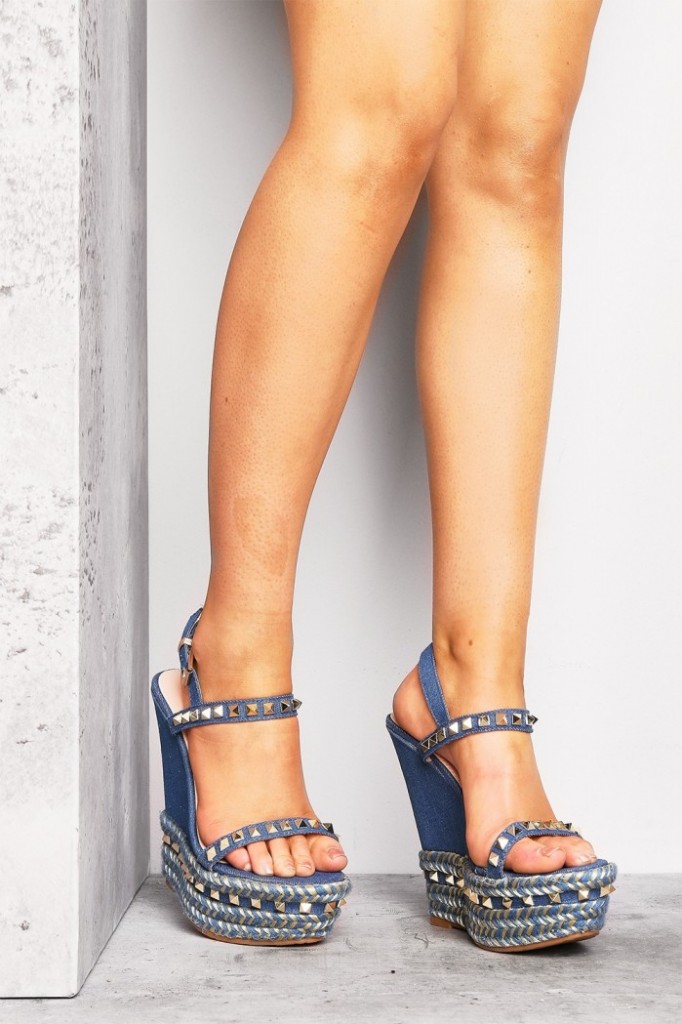 Stand head and shoulders above the rest and make a serious style statement in these platforms. In an espadrille style, studded detailing and denim finish, wear with a denim dress and a floppy hat for serious summer vibes. 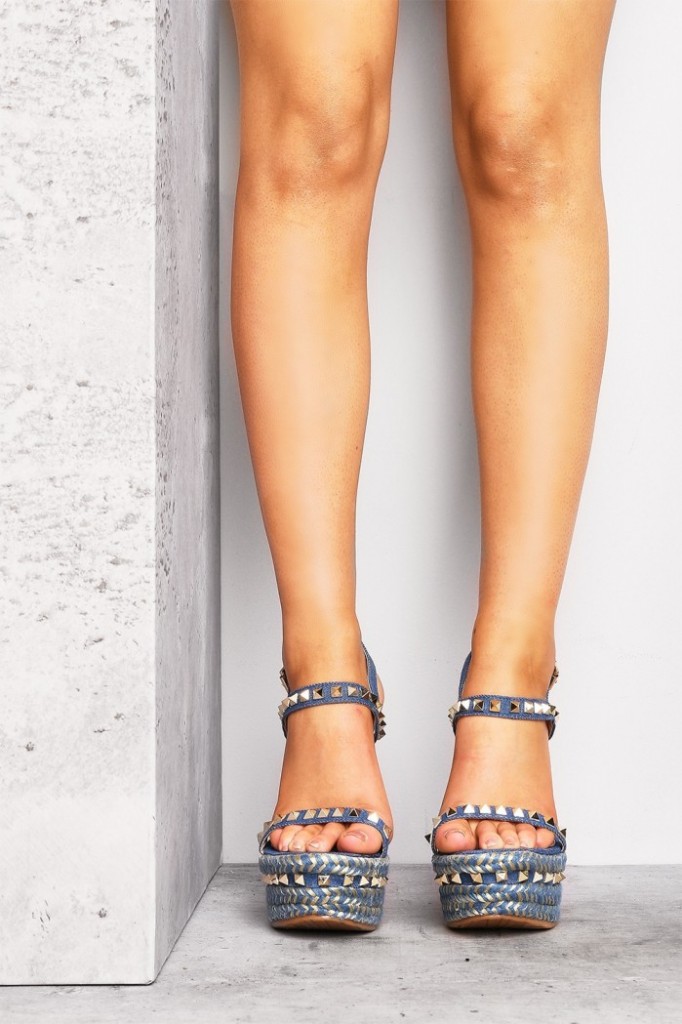 Available online from Lasula, you can purchase Kate’s platforms for yourself by clicking right. The perfect pair for a summer party, these espadrille-style heels would look great with just about anything. 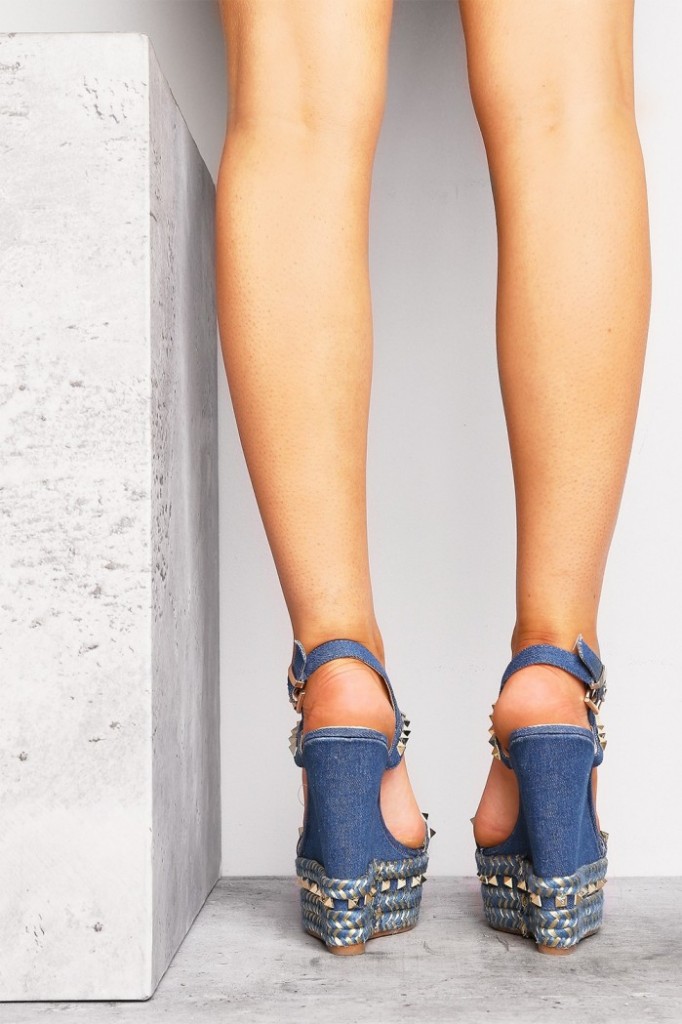 Want to see more options before you commit? Check out our edit below for some great alternatives. 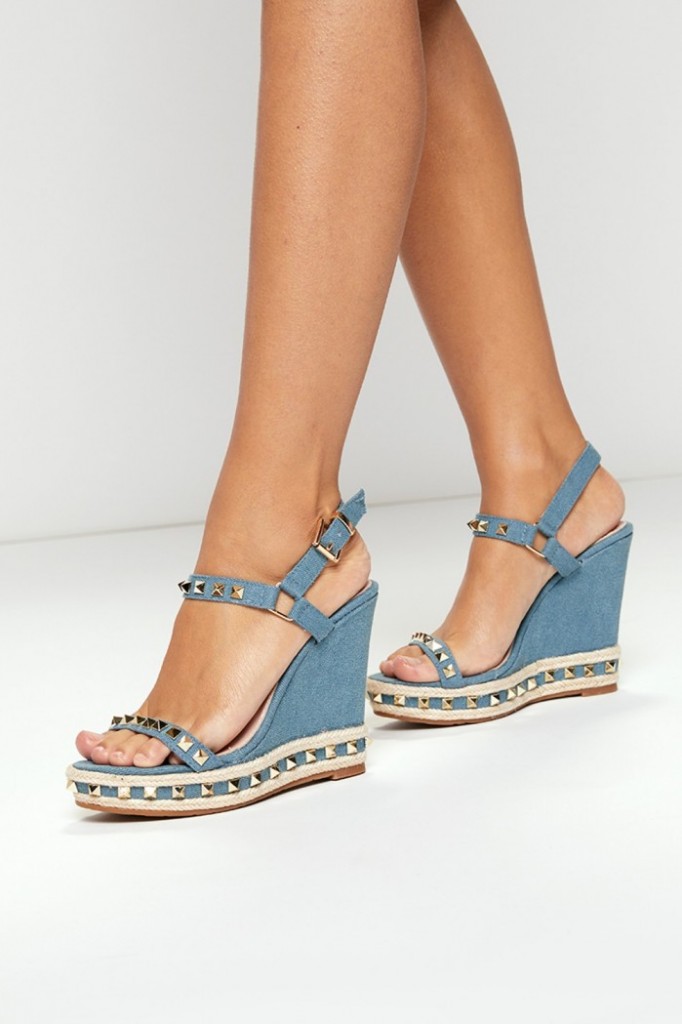 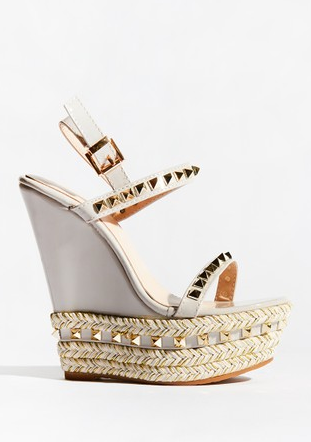