Last week Lionel Richie talked about his daughter’s controversial romance for the first time, admitting that he’s in shock. But Scott Disick, 34, who went public with his romance with Sofia Richie, 19, recently, looked unfazed as he left his appearance at The Sugar Factory in Washington, Virginia on Thursday. The TV personality was joined by children Mason, 7, and Penelope, 5, who he shares with Kourtney Kardashian, ahead of his rumoured private visit to The White House. 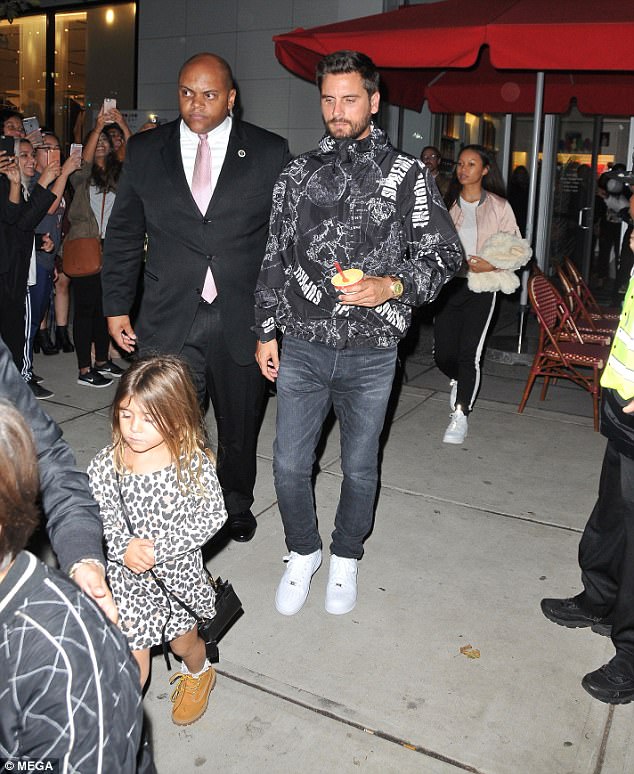 Clad in a bright logo-embellished shellsuit jacket and jeans, Scott cut a casual figure as he left his PA at the restaurant, joined by a stylish Penelope who looked cute in a leopard-print dress and mini Timberland boots. 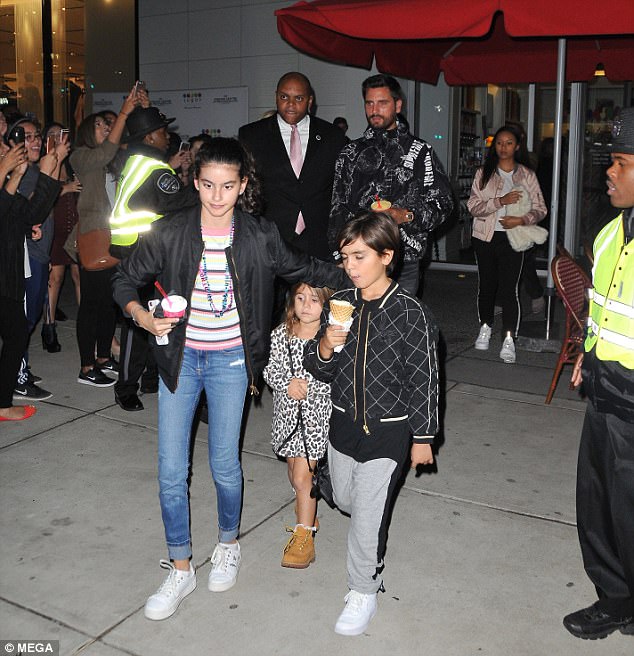 She and brother Mason were shepherded by the daughter of Scott’s pal as they enjoyed ice cream, accompanying the reality family on their trip. On Thursday it was reported by TMZ that Scott, who calls himself Lord Disick, had organized a private tour of the president’s landmark abode The White House following his restaurant appearance. 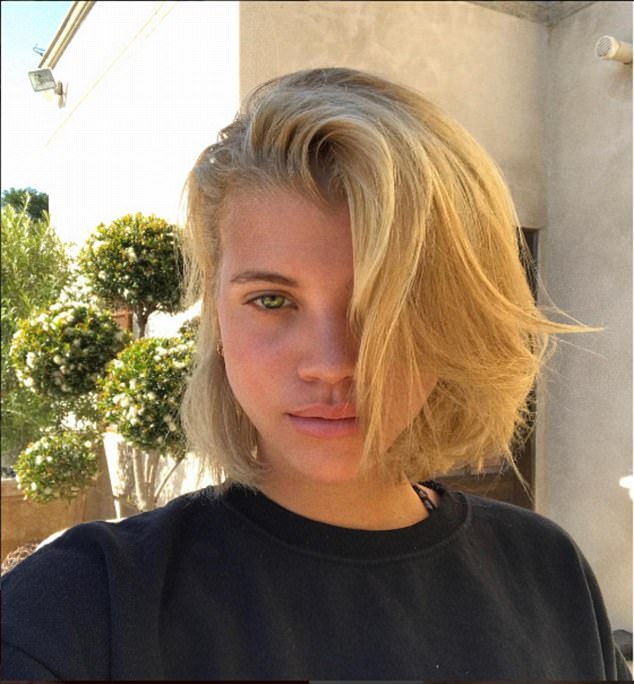 Meanwhile Sofia appeared unfazed by the controversy her romance with Scott is courting, as she took to Instagram on Thursday to share a racy post as she posed in a lace corset. The 19-year-old model, who is 15 years Scott’s junior, showed off her enviable figure in the steamy snap.  Making the most of her ripped abs and shapely hips, she sported a pair of loose fitting white jeans. She teamed the high-waist trousers with a semi-sheer lace bustier, showing off a glimpse of her tanned decolletage. Completing the angelic all-white ensemble with an oversized white shirt-presumably not that of 34-year-old boyfriend Scott, she shared the racy post to her Instagram story. 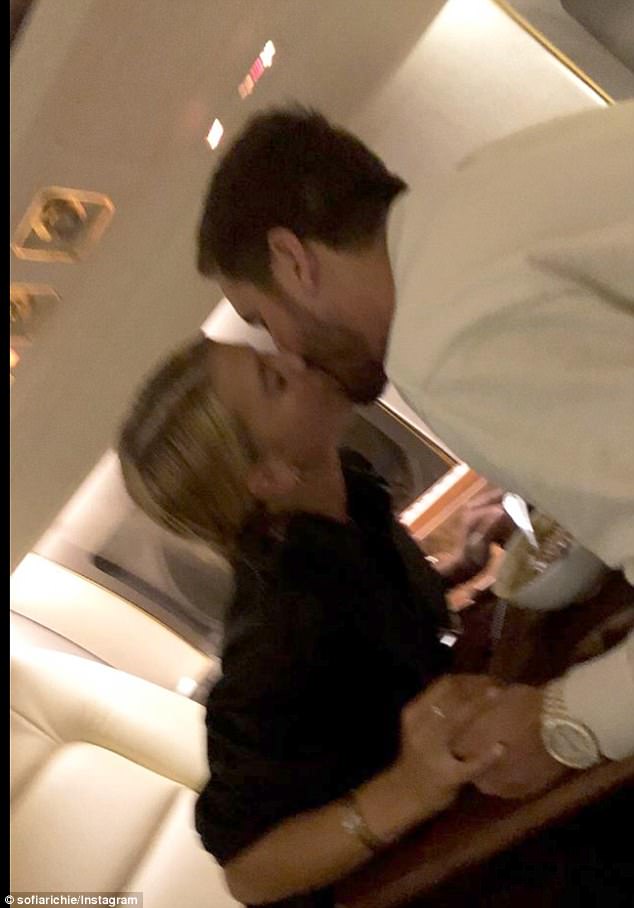 Her post comes after a string of holidays and besotted Instagram posts with her partner Scott. As well as enjoying a recent holiday to Miami, where the teenager visited Liv club despite being underage, the duo have been enjoying regular date nights shared with their fans online. On Sunday TMZ reported Kourtney had ‘no problems’ with her ex dating someone else, ‘because if he’s happy she’s happy,’ a source claimed. 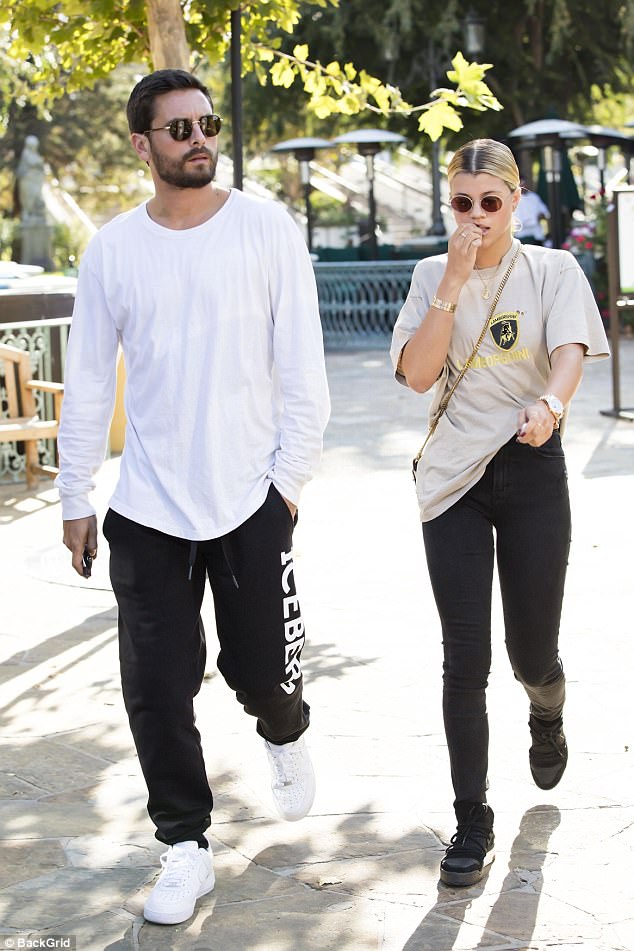 According to the site, Kourtney, who shares children Mason, 7, Penelope, 5, and 2-year-old Reight with her long term ex, isn’t bothered about his relationship with 19-year-old Sofia ‘because she thinks it’s genuine and feels good that he’s moving on’. Meanwhile Kourtney is also dating someone younger as well- model Younes Bendjima, 24, who she has been linked with throughout the summer. Coincidentally, Younes and Sofia used to be friends, but sources report the two have stopped talking since he embarked on a relationship with Kourtney.

Meanwhile Sofia’s father appeared to express his disdain at his daughter’s relationship with Scott. Talking to US Weekly on at the American Idol auditions in New York where the 68-year-old will serve as a judge on the singing competition show, he said: ‘Have I been in shock?! I’m the dad, come on.’ Sofia and Scott went public with their romance in late September, however they were linked as far back as May. 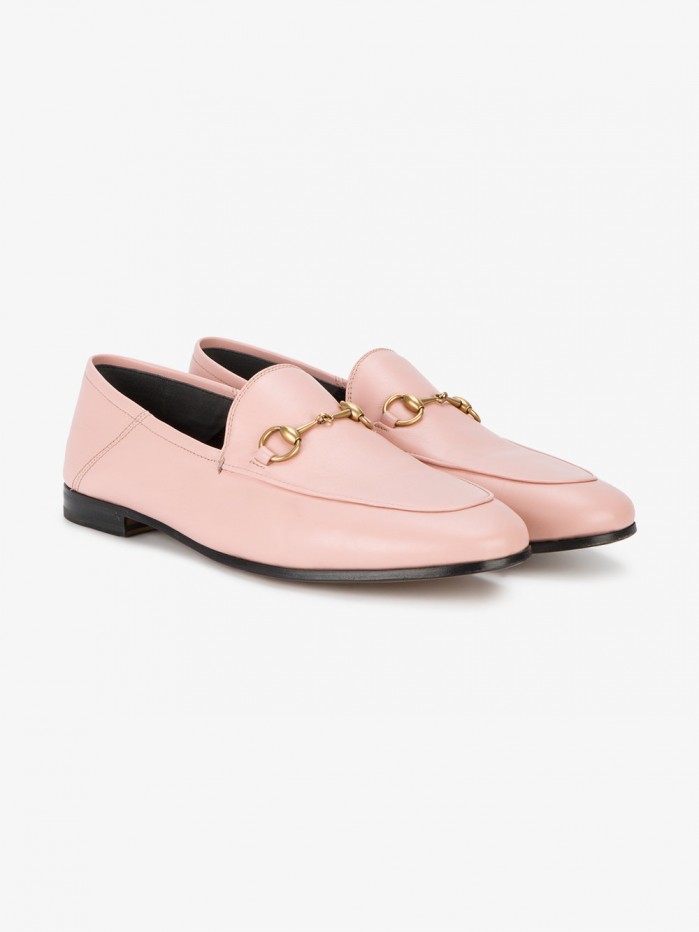 With these pink Gucci leather ‘Brixton’ horsebit loafers you won’t be able to put a foot wrong. An update of the signature Gucci shoe, each piece is ‘Made in Italy’ from butter-soft pink leather and has gold-tone horsebit detail on the front, a slim shape, welt stitched leather soles with low heel and stitched seams at the back that allow the design to switch from loafer to slipper. Wear your Gucci loafers with Miu Miu as you paint the town pink in Soho. 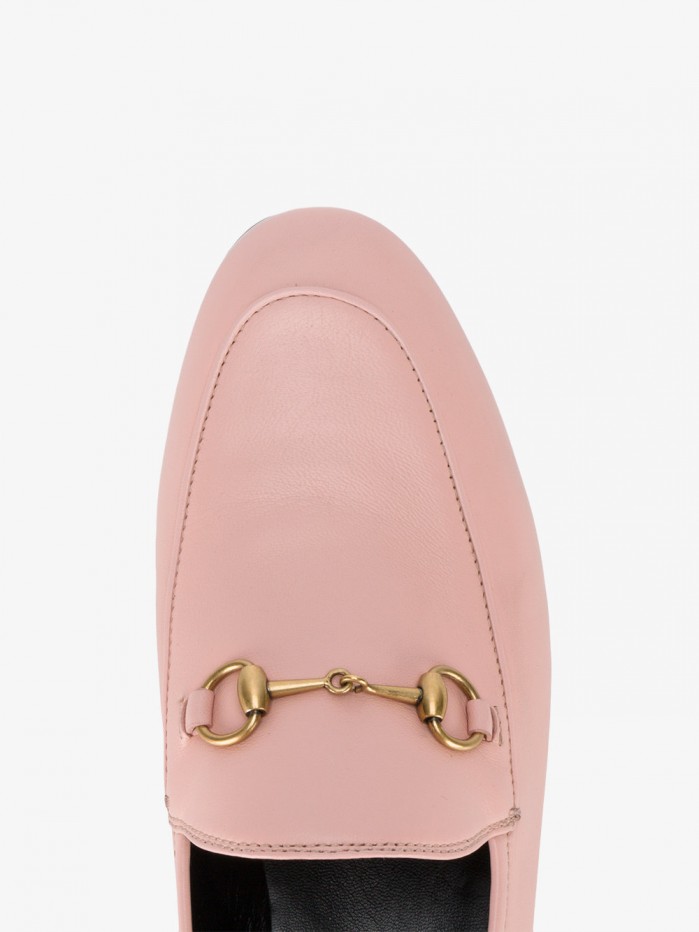 Whether fur-lined, backless, classic black or pink, celebs everywhere are treating their feet to this ubiquitous flat. The legendary loafers feature a signature horsebit style but Sofia’s powder pink shade is the perfect way to put a new spin on a classic, and we love how it adds a feminine touch to the masculine style. They’re perfect for adding a pop of colour to your spring wardrobe, and they’re a bit sleeker than trainers but just as comfortable 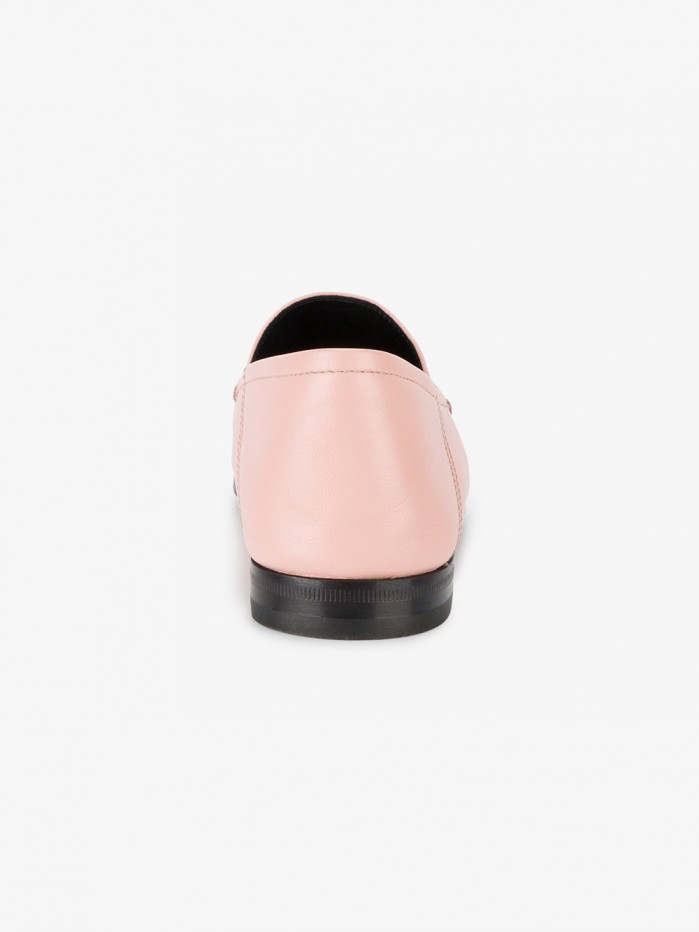 Click ‘Buy’ to shop Sofia’s exact shoes at Browns Fashion and join the Gucci gang too: 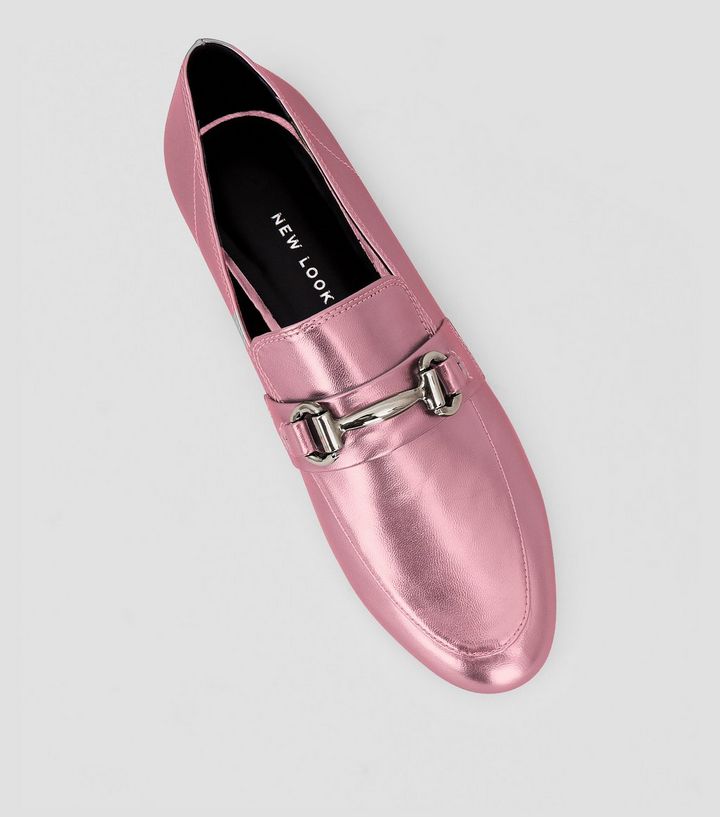 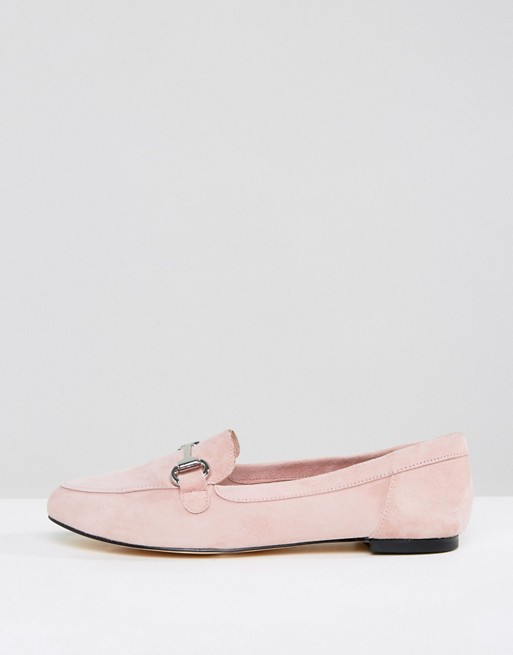