Make like Cara in mid heel mules by Gucci

Make like Cara in mid heel mules by Gucci

Cara De La Hoyde put her heartache to one side on Friday afternoon as filming commitments continued in earnest on the set of The Only Way is Essex. The newly single reality star, 26, caught the eye in a vibrant red minidress as she relaxed between takes with co-star Georgia Kousoulou. A lightweight denim jacket gave the overall look a casual flourish, while black mules rounded things off ahead of her latest appearance on the hugely popular show 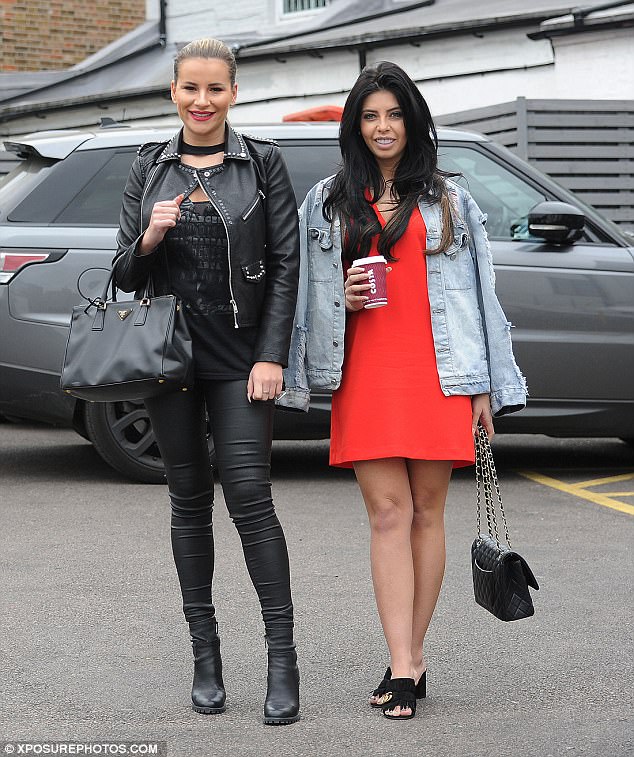 Nursing a cup of coffee, Cara looked reflective as she waited for cameras to roll – just hours after her separation from former Love Island co-star Nathan Massey was confirmed. Joining her pal on set, Georgia, 25, opted for an edgy cropped leather jacket and matching skinny trousers, while a ripped Harley Davison T-shirt and on-trend ankle boots completed her ensemble. A generous layer of blood red lipstick added a splash of colour to an otherwise understated look as Georgia readied herself for another scene. 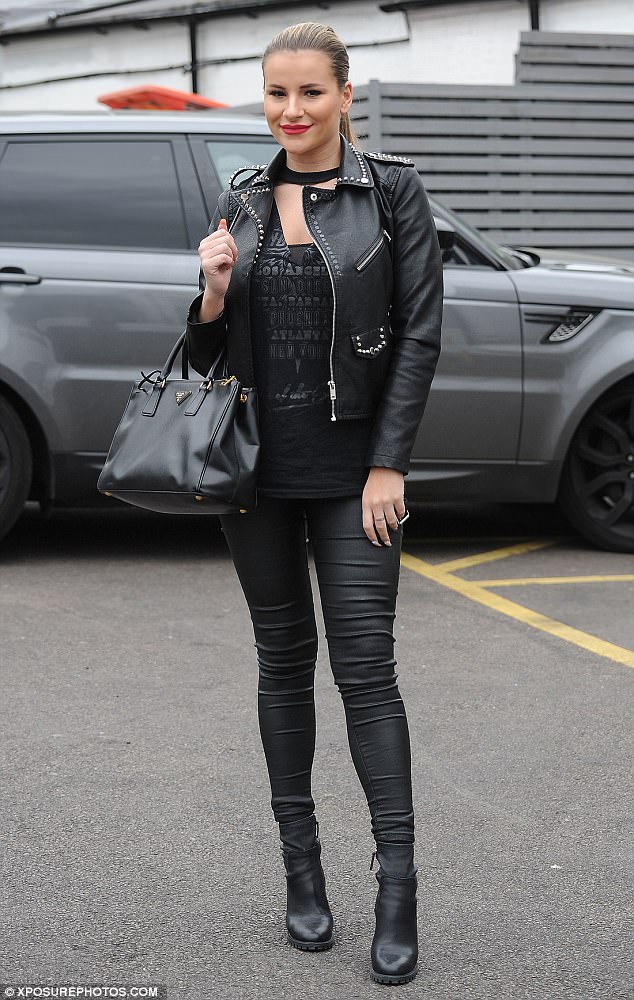 Joining her pal on set, Georgia, 25, opted for an edgy cropped leather jacket and matching skinny trousers, while a ripped Harley Davison T-shirt and on-trend ankle boots completed her ensemble. 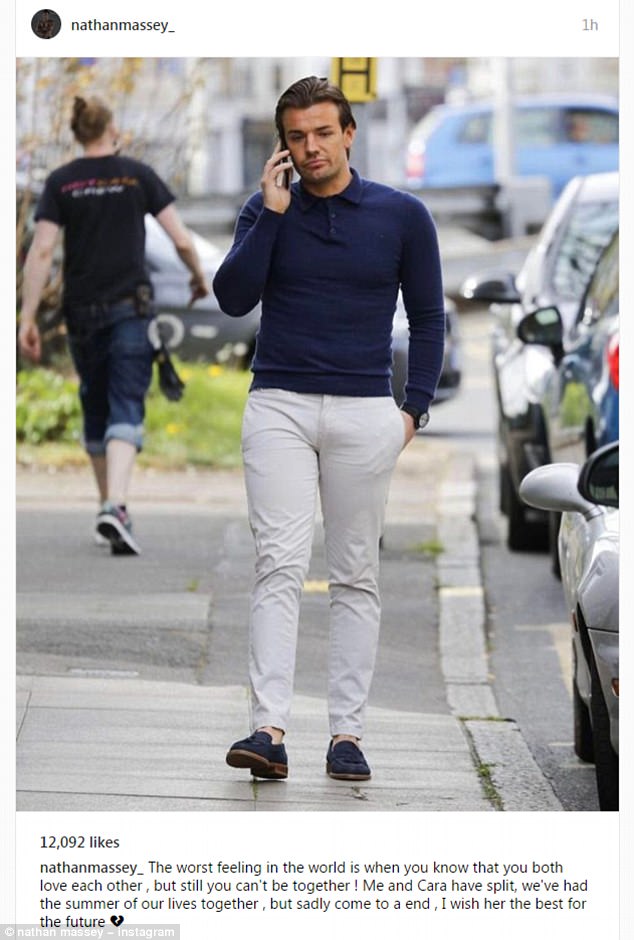 Nathan took to social media to confirm his relationship with Cara was over as she made a solo appearance at the Jog On To Cancer charity event at Kensington Rooftop Gardens on Wednesday evening.  Alongside a shot of himself looking solemn as he took a solo stroll while chatting on his phone, he wrote: ‘The worst feeling in the world is when you know that you both love each other, but still you can’t be together! ‘Me and Cara have split, we’ve had the summer of our lives together, but sadly come to an end , I wish her the best for the future.’ 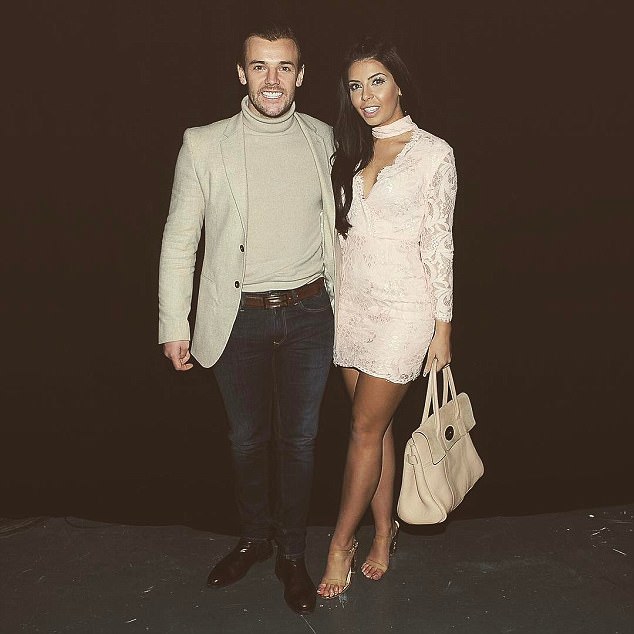 Doing her part in spreading the news, the brunette took to Twitter around the same time as she announced: ‘Me & Nath have split… sometimes love just isn’t enough, but what will be will be… thank you for everyone’s support lately.’ 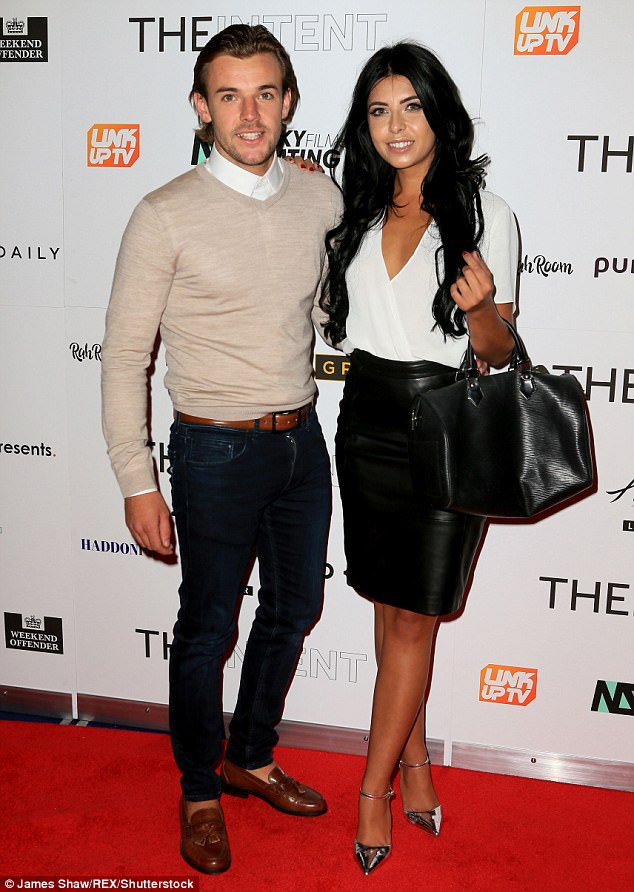 The former couple first got together last summer when they met on reality show, Love Island. 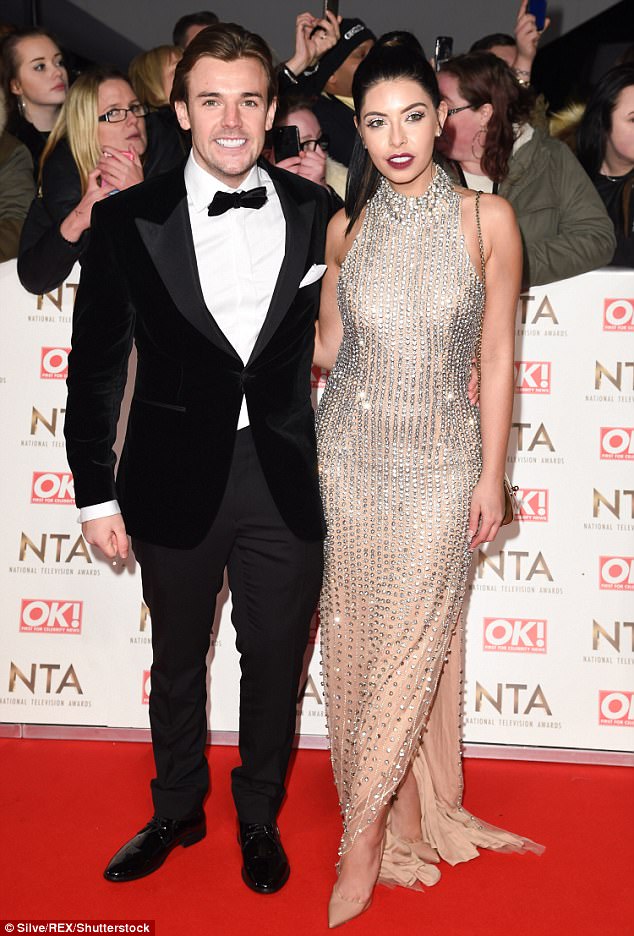 As she discussed their meeting, she explained: ‘I liked him straight away. He was so different to all the other guys on the show who were tall and muscly and really sure of themselves. ‘I knew that if we didn’t work out romantically then I’d have a friend for life in Nathan.’ 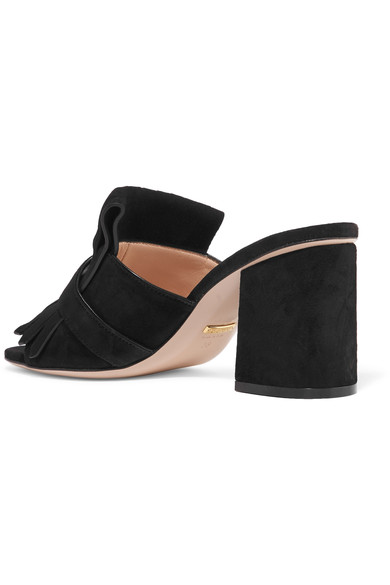 Gucci’s cult ‘Marmont’ collection is defined by the lightly burnished gold ‘GG’ hardware. These black suede mules are decorated with loafer-style fringing and are set on a manageable mid-heel. Slide them on with one of the label’s pleated midi skirts, or wear with cropped denim. 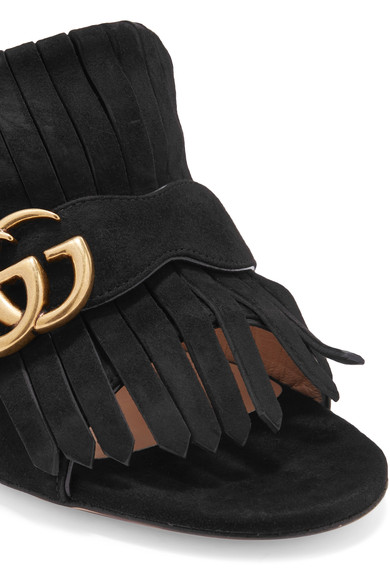 We love the suede fabric and fringe trim. The mid height heel means they’re a lot more manageable than stilettos, plus they’ll work with everything from jeans and a tee by day to your best little black dress for evening. 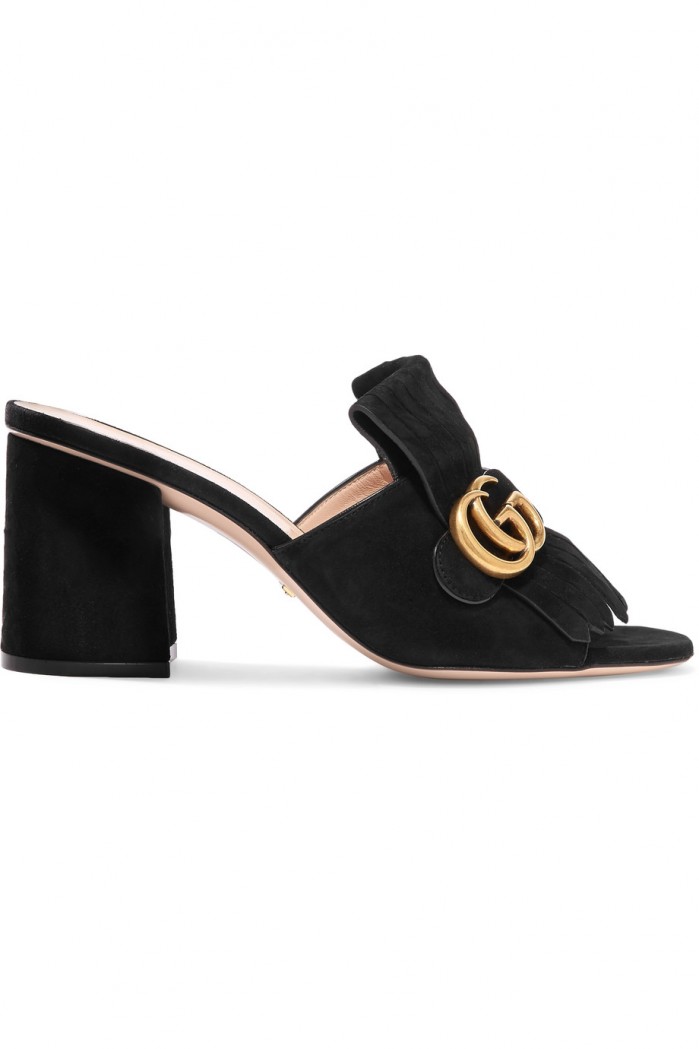 Click (Buy) to grab them now at Net-a-Porter, or check out the best of the rest in our edit below: 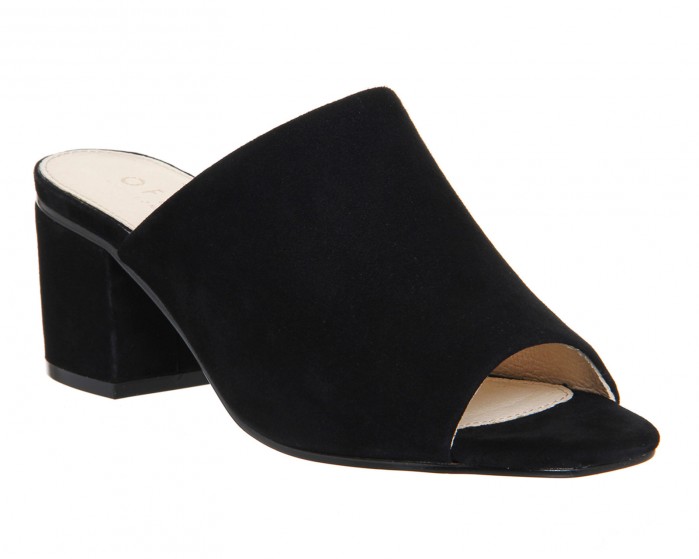 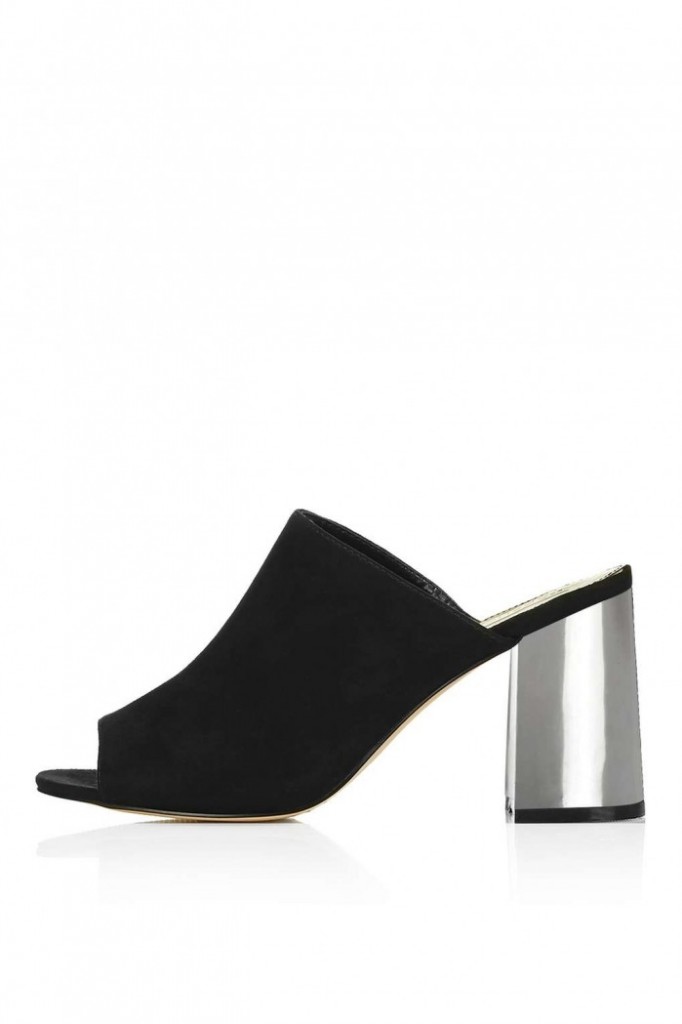