She caused fan hysteria after premiering her new single Stop Me from Falling. And Kylie Minogue was every inch the style queen as she left the BBC Radio 2 Studios in central London on Friday. The singer, 49, was effortlessly chic in a spotted trouser suit and blush pink blouse as she posed for selfies with fans after leaving the an interview with breakfast show host Chris Evans. 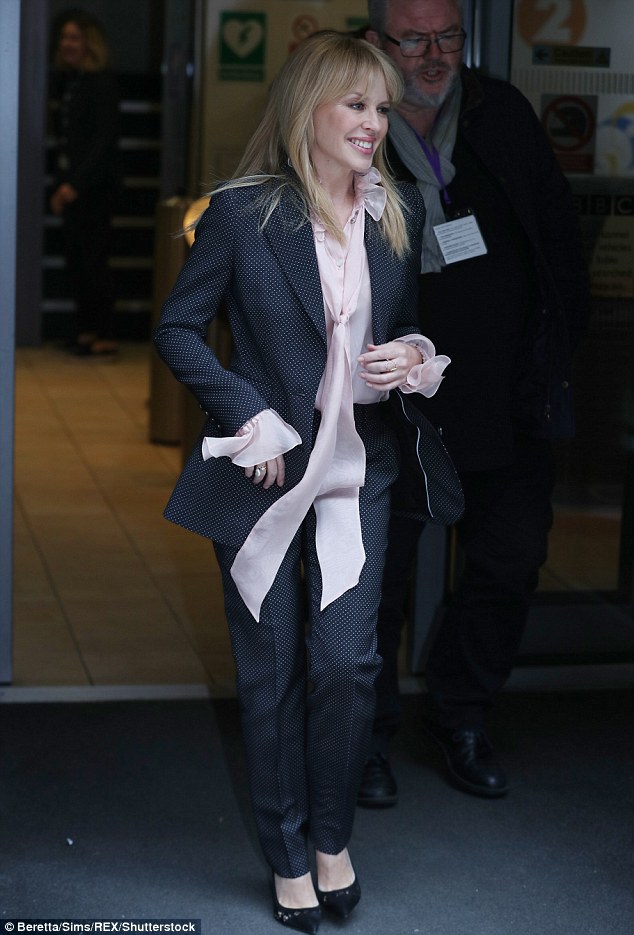 The Spinning Around hitmaker was suited and booted in her stylish co-ords which were covered in white polka dots as she was greeted by a mob of fans after leaving the studio. The Australian songstress teamed the look with a cute pink ruffled blouse. Kylie added height to her petite frame with black lace pointed-toe heels and flashed her beaming smile for fans as she posed for selfies and signed autographs. Highlighting her alabaster complexion with natural make-up, Kylie let her naturally beautiful features shine through. 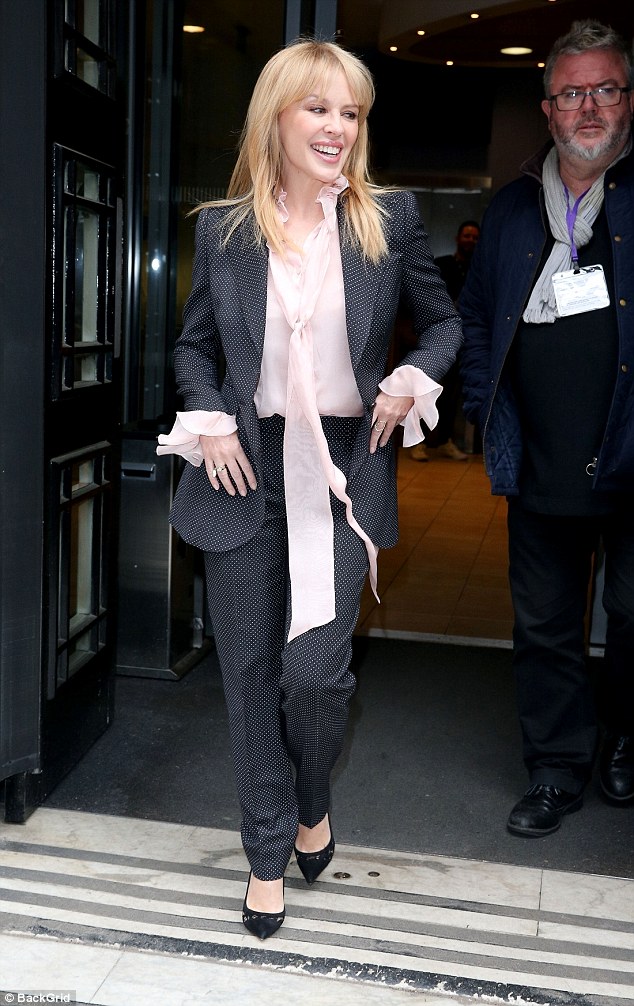 Kylie styled her blonde hair into a straight fringed style for the radio appearances, as she chatted to host Chris the country music roots behind her latest album Golden. Describe her 14th studio effort as ‘Dolly on the Dancefloor’ the legendary performer recalled the moment she first saw the iconic country star in action. Kylie said she saw Dolly Parton perform at The Hollywood Bowl in 2016, admitting it was like an epiphany seeing the singer, 72, in action. The Spinning Around singer said: ‘It’s taken me this long in my life to meet Dolly Parton live! All I can say is that it was like seeing the light. 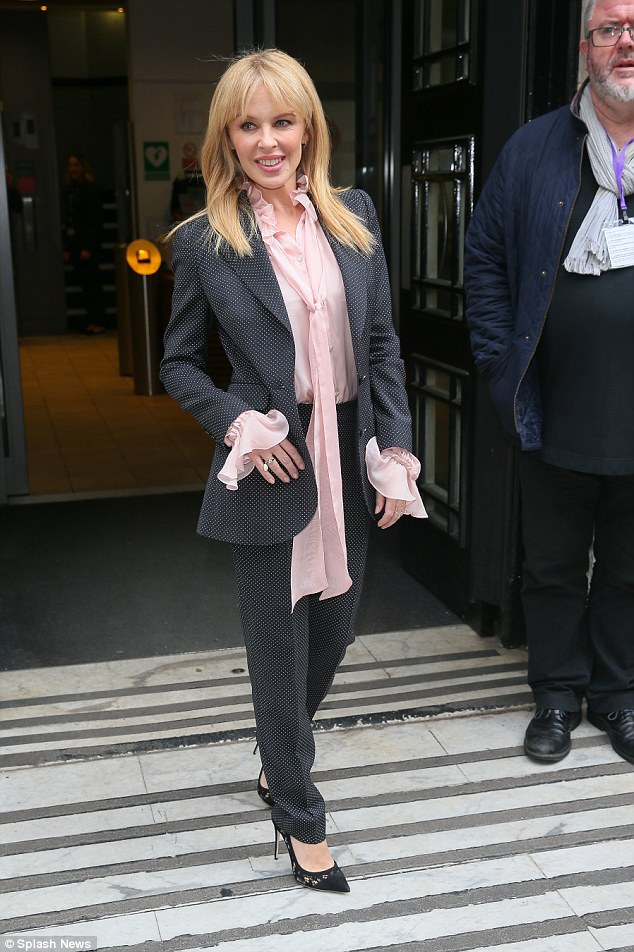 ‘She just came out and I thought life’s different it’s incredible! It was the first time for me. ‘I managed to get tickets on the day. There was a huge smattering of celebs in the audience, I can’t even name them now!’ 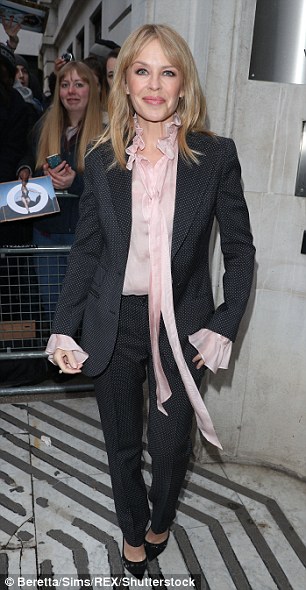 ‘When I saw Dolly I hadn’t really thought about the current album and didn’t know it would have a country influence, and my takeaway was what a performer can do to you as an audience member. ‘Just her connection and her human nature, her wit, her humour, she was just everything I had wished for.’ 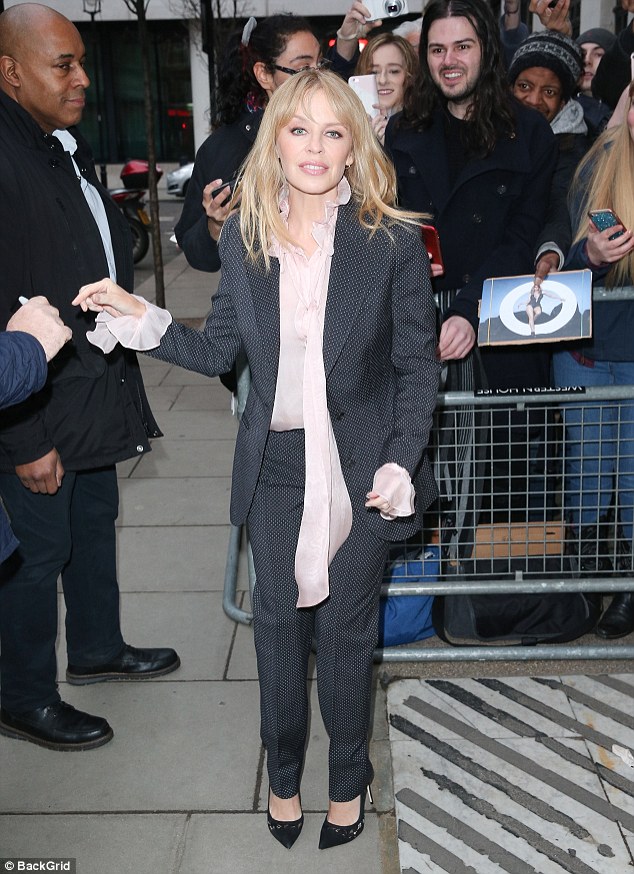 Kylie’s new album Golden comes after the songstress announced her first UK tour in three years, which will see her perform in cities such as London, Newcastle, Liverpool and Birmingham. 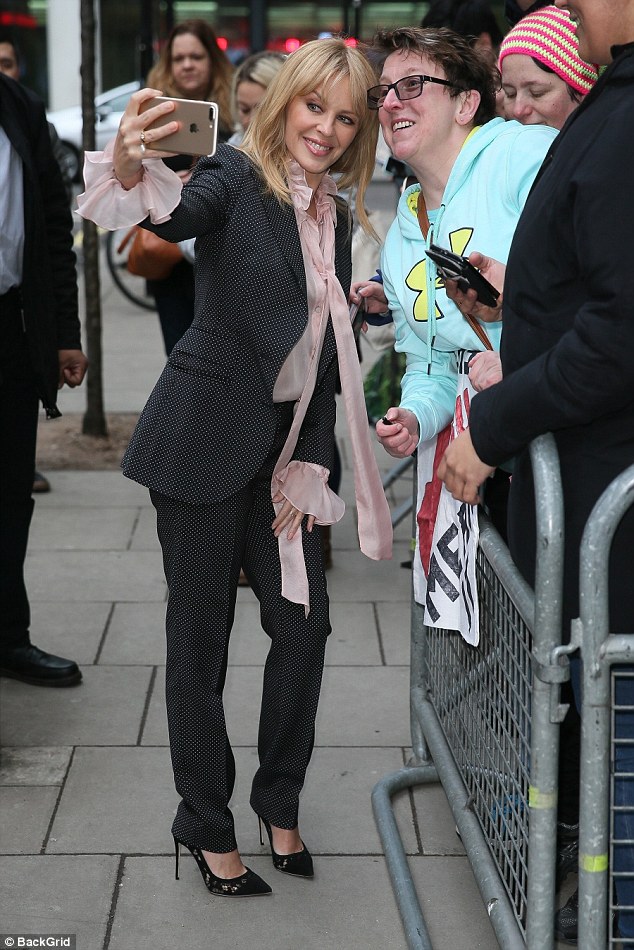 Golden is said to be one of the most personal albums to date for the singer, who endured a difficult year following her split from fiance Joshua Sasse. Kylie started working on the new record shortly after calling off their engagement and co-wrote all the songs including lead single Dancing, which was released in January. 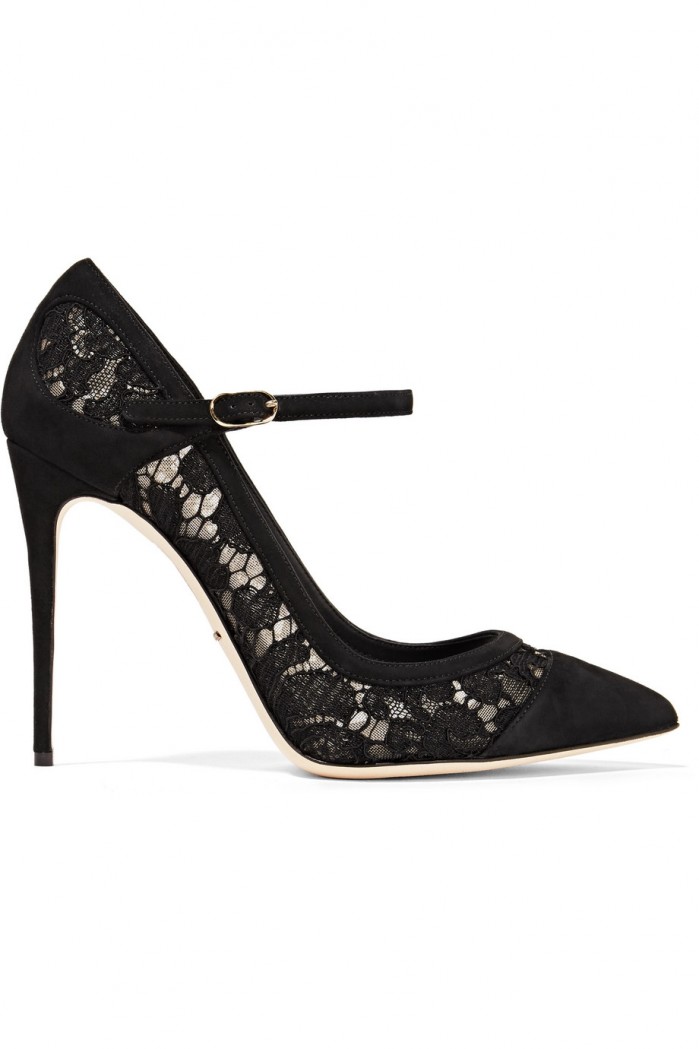 In sharp tailoring, Kylie meant business but she kept it playfull with that feminine pink frill blouse. And let’s not forget the shoes! By Dolce & Gabbana (one of Ms Minogue’s favourite designers) they’re a chic but sexy bit of footwear. 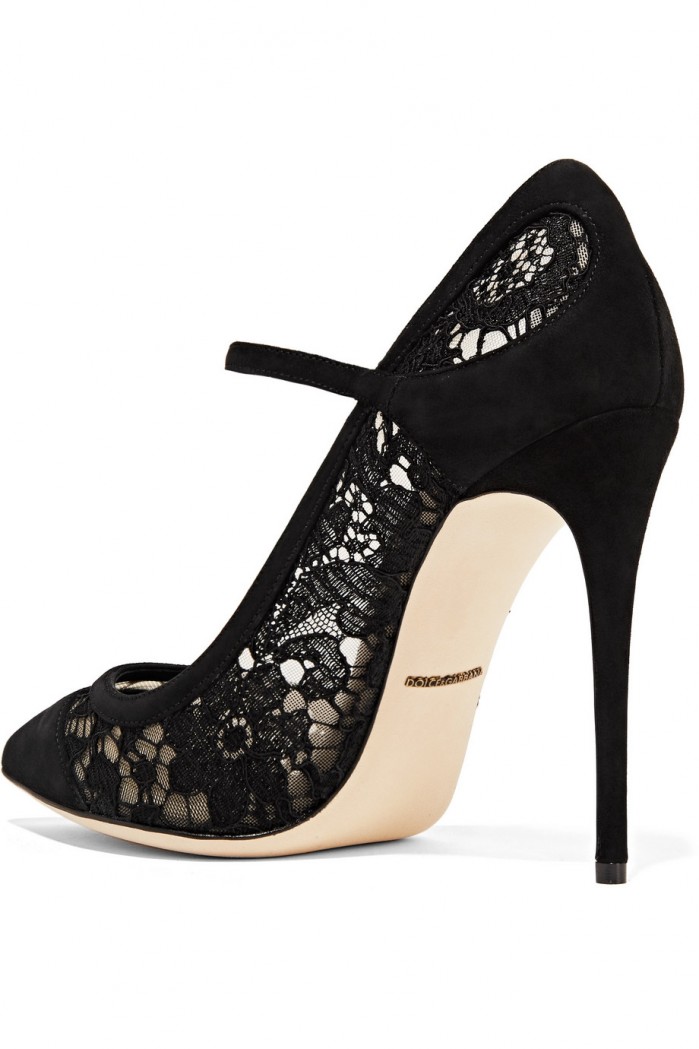 With a pointed toe and slender stiletto heel, they’re ideal for strutting your stuff but of course it’s the luxurious touch of lace that really makes them a must-have buy. So why not steal Kylie’s style? 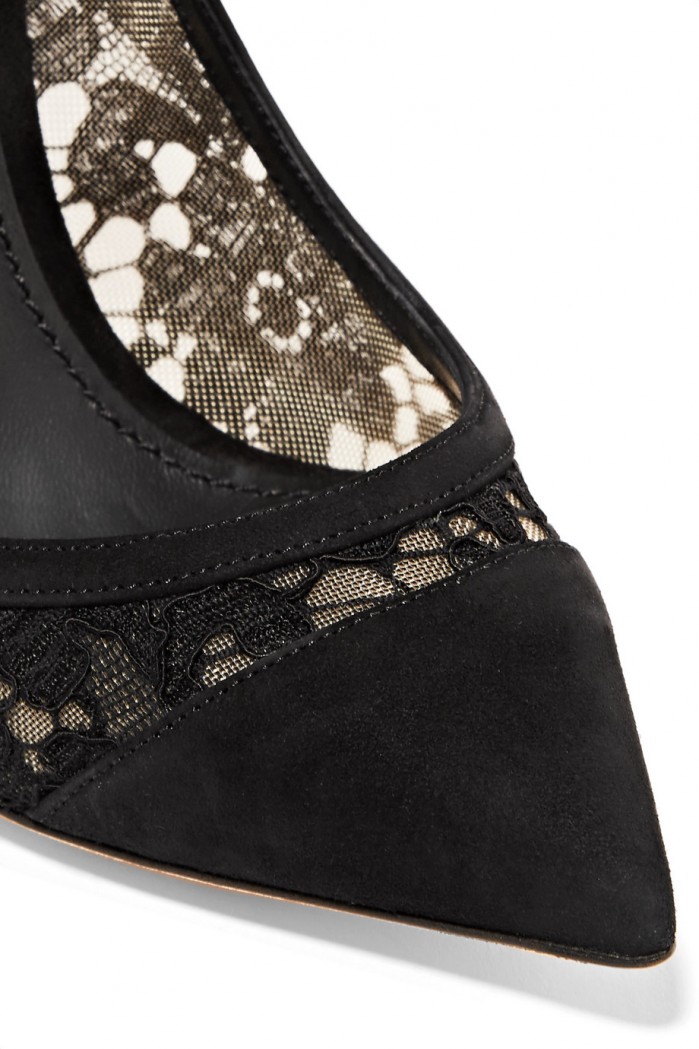 Click ‘Buy’ tab now to bag a pair at Net-a-Porter. Or get the look with our edit of lace lovelies below: 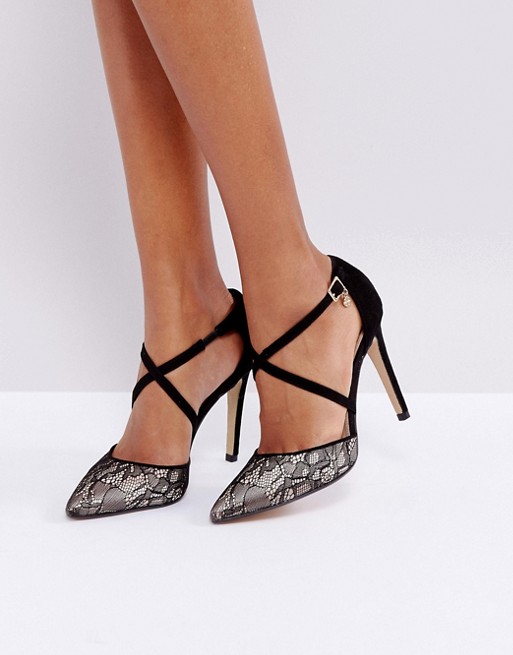 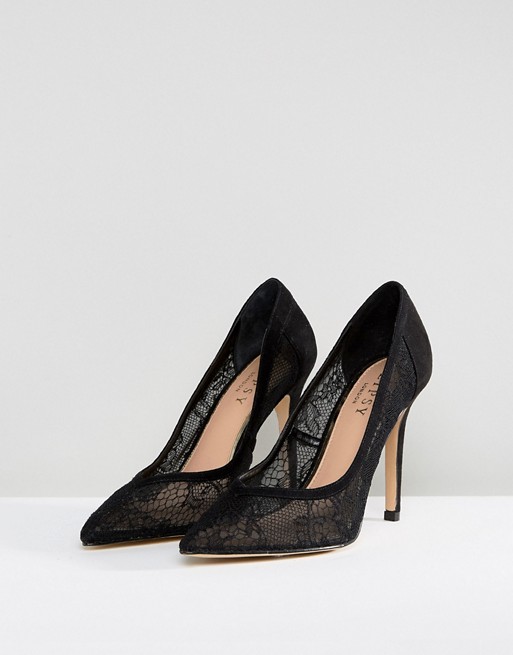