Kylie Jenner has been pictured for the first time since it has been reported that she is pregnant with her first child with boyfriend Travis Scott. The 20-year-old reality star and her rapper boyfriend are said to have broken the happy news to friends earlier this month, with multiple outlets reporting that the youngest member of the Kardashian-Jenner clan is expecting her first child. Masking her famous figure, she sported a loose-fitting black T-shirt with red cargo pants as she appeared worlds away from the scanty attire for which she has become known – undoubtedly sparking further speculation of her baby news. 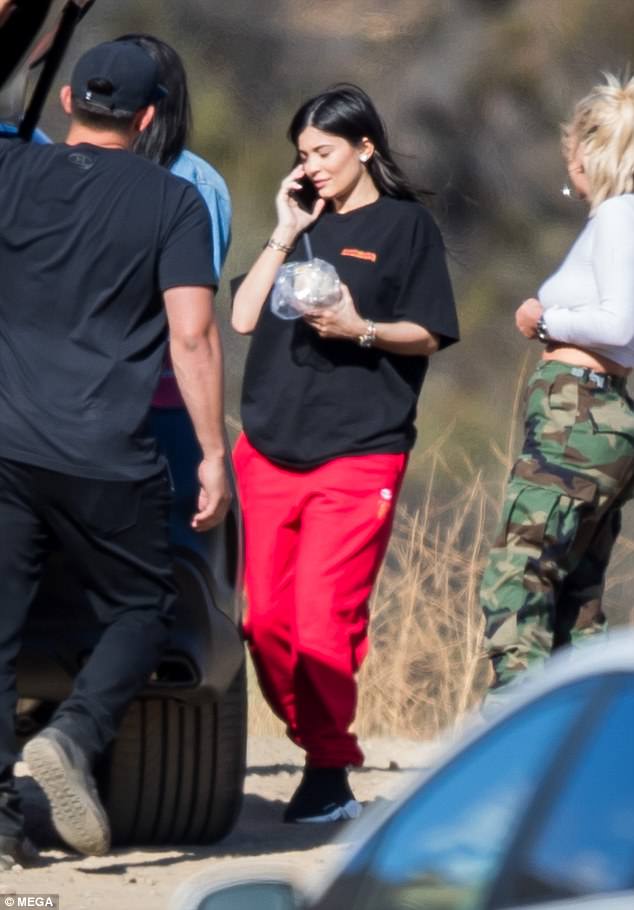 It is even claimed that Kylie and 25-year-old Travis know the sex of the child – and are having a girl. A source confirmed the news to DailyMail.com, adding that the young star is around four months pregnant. TMZ first broke the news, with a report stating that Travis was telling friends his life was about to change. A further source told People magazine that Kylie was overjoyed about her pregnancy. 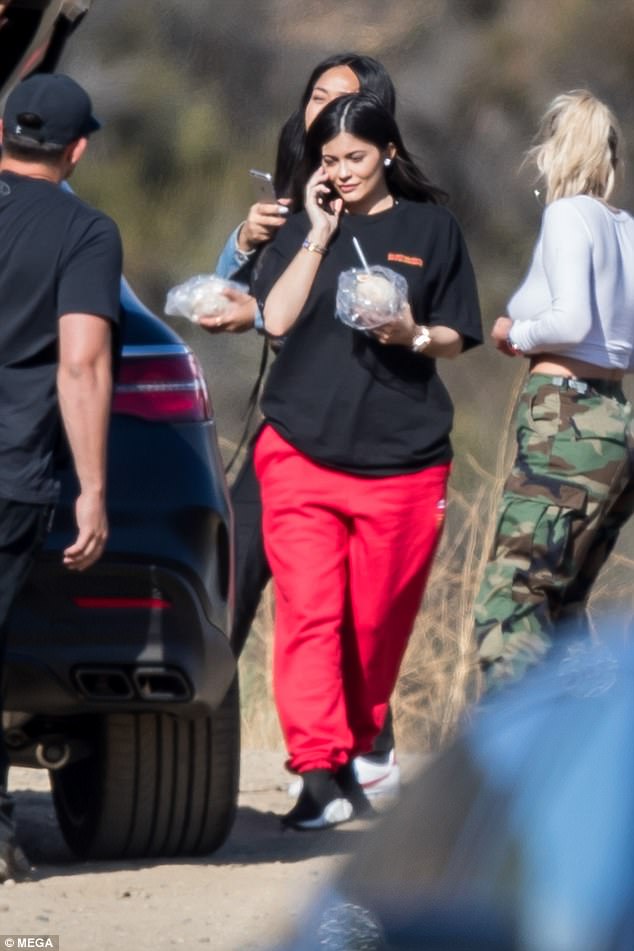 ‘It is an unexpected but completely amazing turn of events that she could not be more excited or thrilled about,’ they said. Kylie began dating Travis back in April following her split from former long-term boyfriend Tyga, who has a child, son King Cairo, with Blac Chyna (her half-brother Rob Kardashian’s ex). 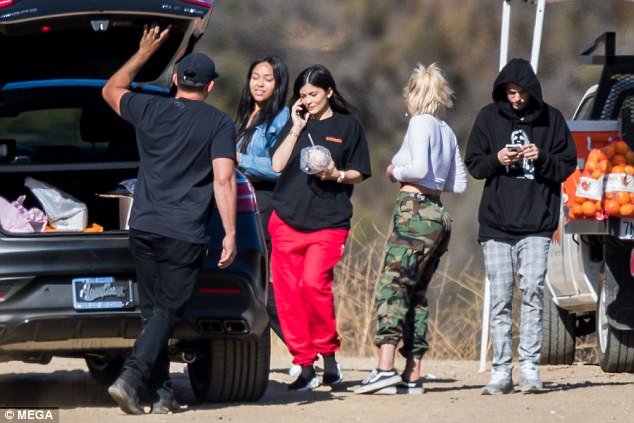 As news broke of the pregnancy on Friday Tyga added his own thoughts to the mix – Snapchatting, then deleting, the comment: ‘hell nah that’s my kid!’ Four months ago – around the time she fell pregnant – Kylie went on a charity trip to Peru.   Keeping Up With The Kardashians viewers were watching as a private jet made a pit stop in Miami to collect her, after she spent a romantic few days with Travis.  In the months since, the two have have proved to become inseparable, and even have matching butterflies tattooed on their ankles. 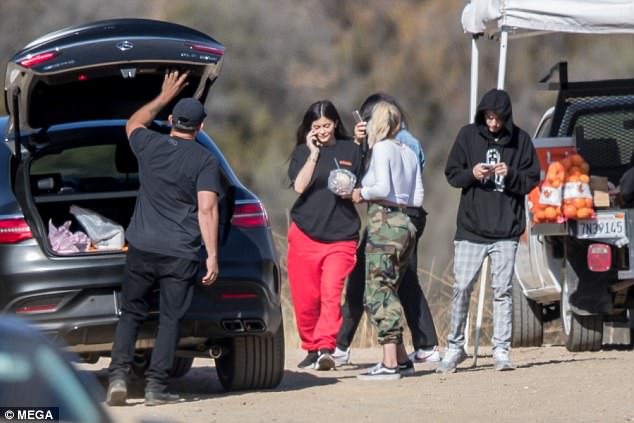 In recent weeks social media savvy Kylie has been unusually restrained in her posts. Not normally one to be shy, she has refrained from any full body shots, instead posting cropped selfies of her head and shoulders, while skipping any public events. On Thursday she shared one full-length shot with a group of friends, but hid her body under a baggy T-shirt. ‘Day 1s’ she captioned the post – a term commonly used to refer to old friends. She also shared a few images to promote her latest clothing line for Kendall + Kyle – which launched on Friday. 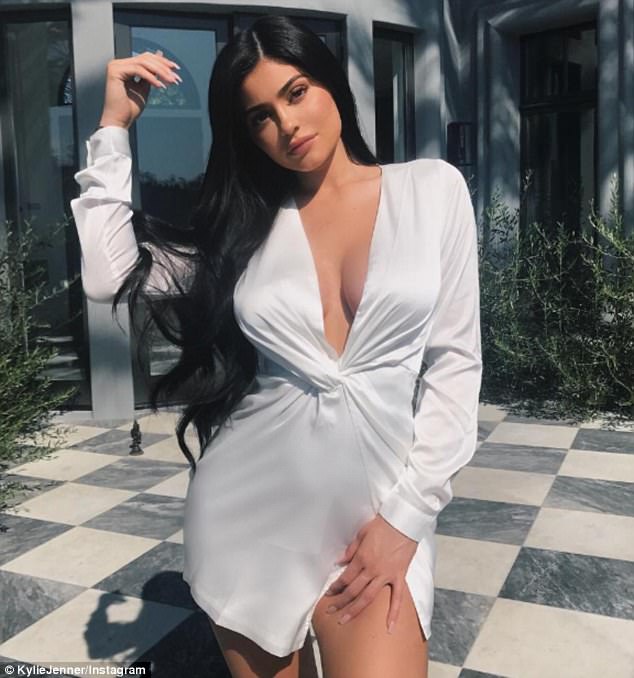 Kylie has previously spoken of her yearning to have a child, even confiding in her grandmother MJ on an episode of I Am Cait that she planned to be a ‘young mom’. 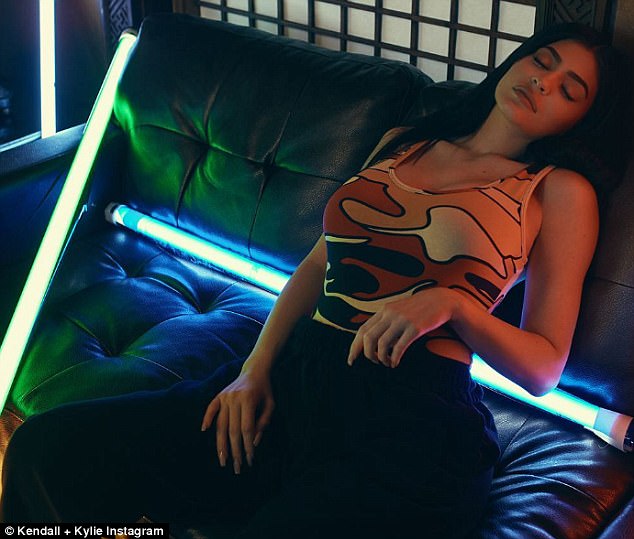 Indeed there was wide speculation that she was expecting a child shortly before her break-up with Tyga back in April. And while the rumour later proved to be untrue, Kylie made it clear she was keen on the idea of starting a family. 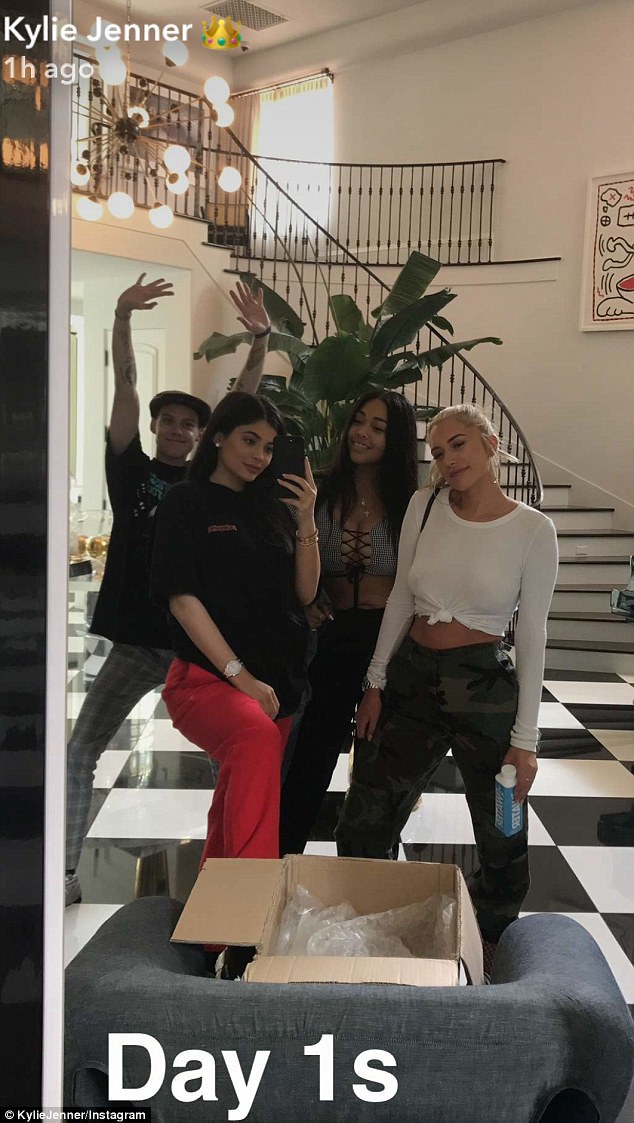 ‘I feel like 30 is too late!’ she said on Keeping Up With The Kardashians. ‘Every psychic said that I’m only going to have two kids.’ On Life Of Kylie back in July she claimed was ready to get out of the spotlight and have a more normal life. ‘I can’t do it forever,’ Kylie said. 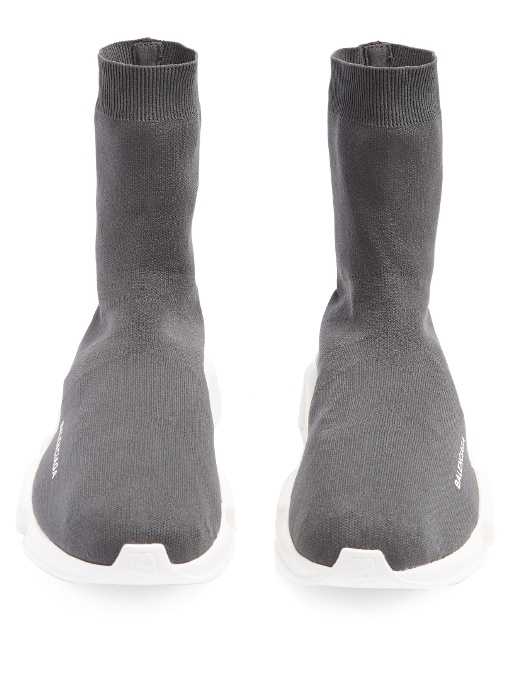 The unique design of Balenciaga’s speed high-top sock trainers have quickly granted them a place among fashion’s favourite cult items, conquering industry insiders and enthusiasts in the know. In a neutral and versatile graphite-grey Italian knit, these round-toe shoes are subtly accented with a white logo side-vamp print. Fits true to size. 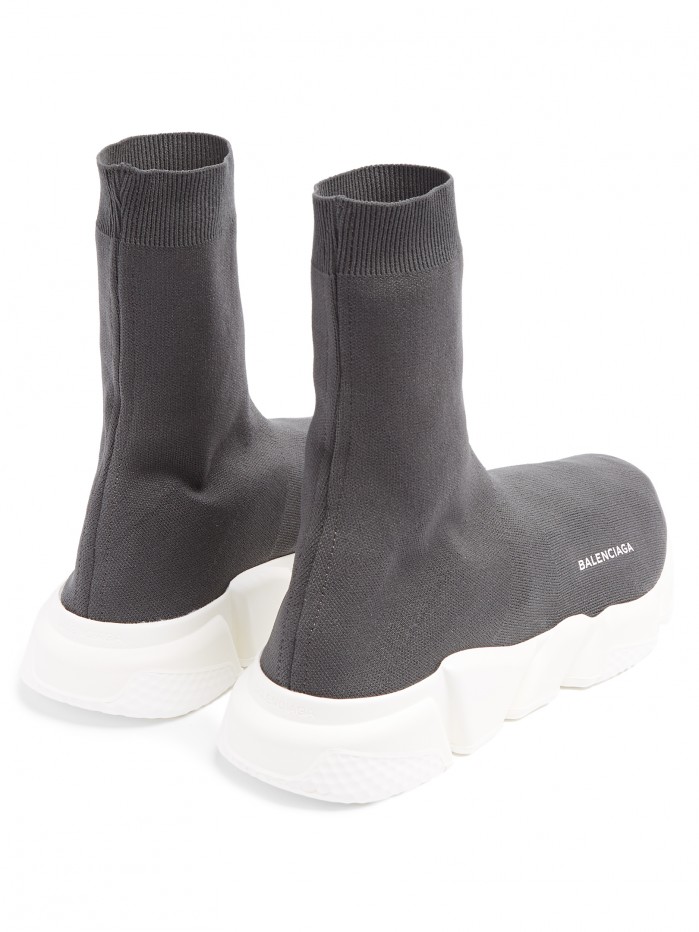 You may have noticed the influx of sock-style trainers and boots taking over the high-end and high-street, with everyone from Stuart Weitzman to Fendi in competition to create the comfiest kicks in all the land. 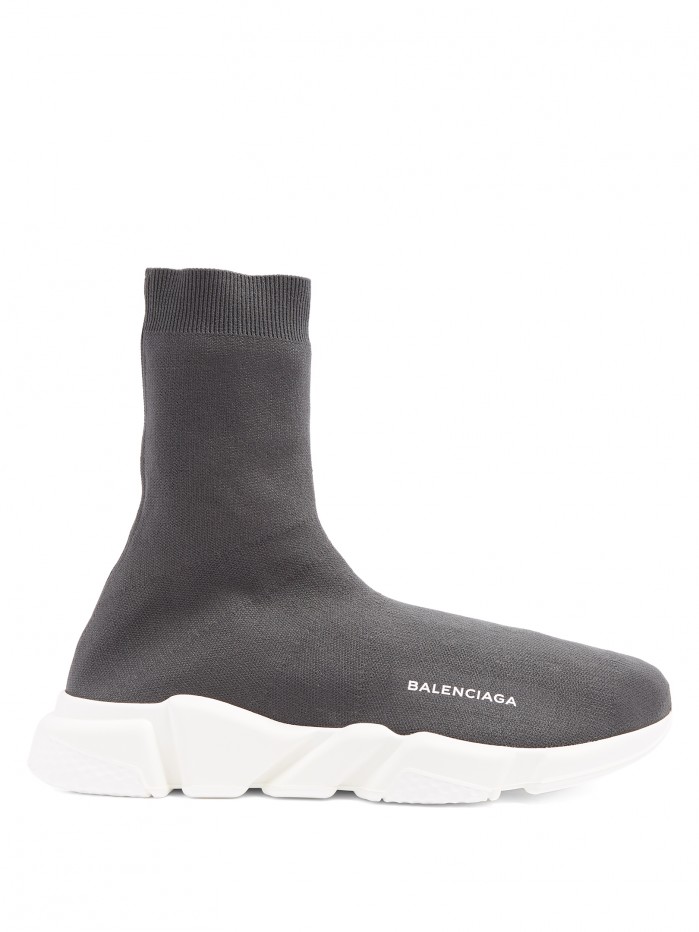 Sadly you can’t buy Kylie’s exact pair right now but you can shop a similar Balenciaga style by clicking the link to the tab ‘Buy.’Alternatively, why not try out the trend via our carousel below: 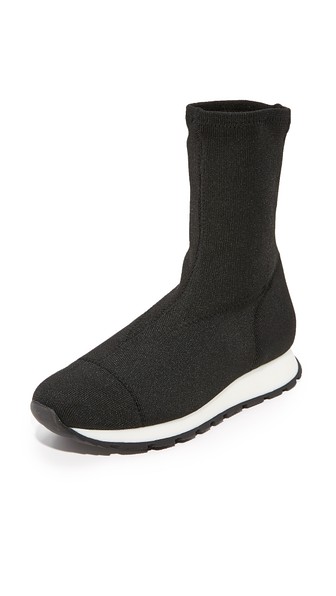 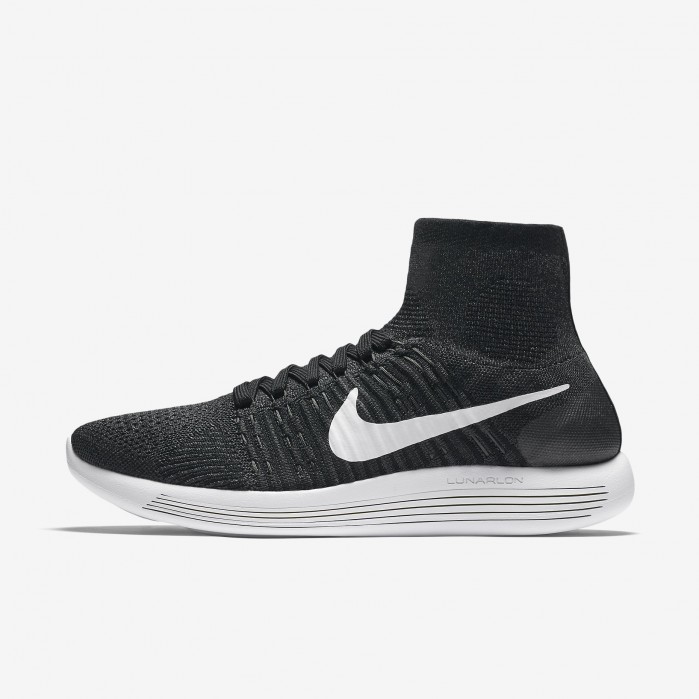