Kick it in Timberland boots this summer

Kick it in Timberland boots this summer

Bella Thorne made sure all eyes were on her while touring a theme park with NBA player Jordan Clarkson on Thursday.  The 19-year-old actress wore a flimsy crop top that exposed underboob while visiting Six Flags Magic Mountain in Valencia, California, with the athlete She paired the revealing top with tiny white Daisy Dukes. 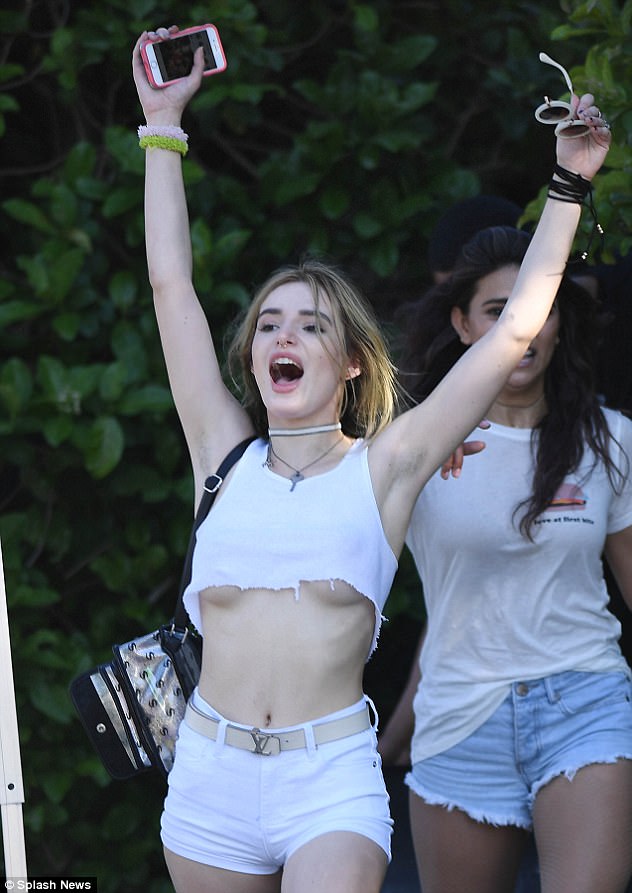 Jordan is the rumored ex of Kendall Jenner; the athlete and model were seen canoodling at a American Music Awards after party last November, reports E!

Bella’s friend, model Kyra Santoro, joined her and Jordan for their first sighting together.  For the theme park visit, Bella opted to forgo a bra.The Famous In Love star’s barely there ensemble revealed not just her flat midsection, but also her long legs and the bottom part of her backside. The former Disney star’s top appeared to be hand cut, with the hemline jagged and frayed. Bella, who wore a cream Louis Vuitton belt with her skin tight shorts, hit the park in white unlaced Timberland boots. 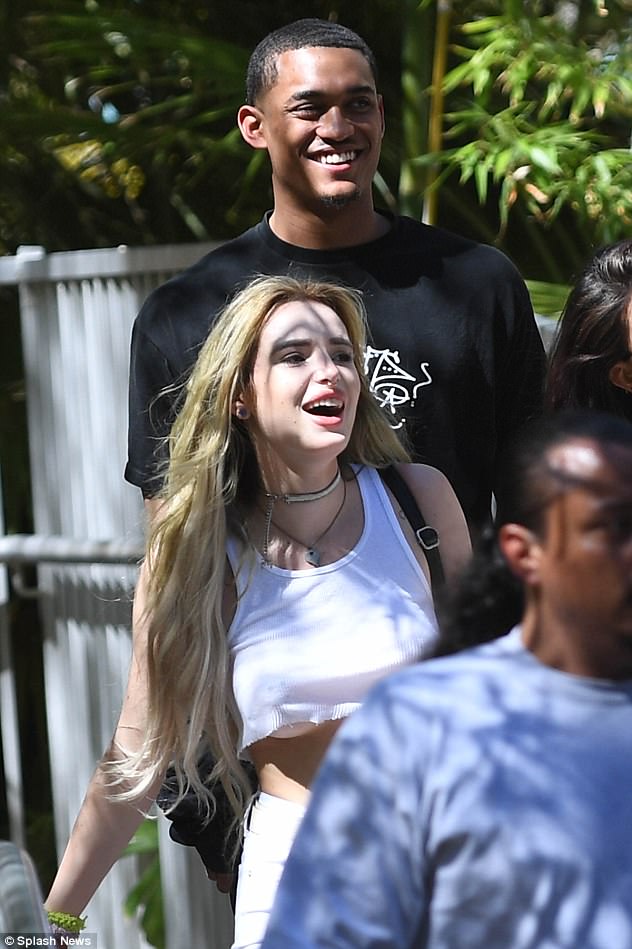 She added a bit of color with pink and purple socks; earlier in the day she wore a gold belly chain but appeared to have taken it off as the day went on. The actress pulled her freshly dyed blonde tresses back into a ponytail while on the rides. 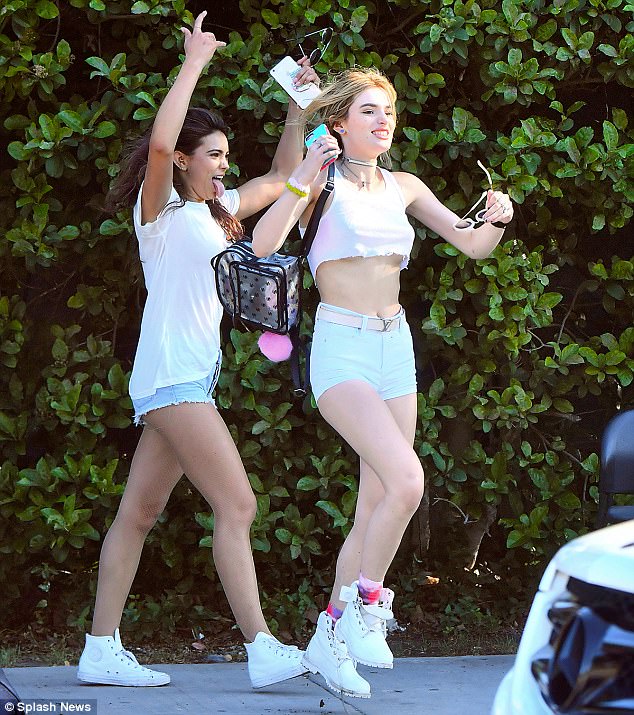 Bella, Jordan and Kyra were spotted getting on a ride, although the athlete sat in a separate row. However, the blonde starlet was seen turning toward him and flashing him a huge smile. 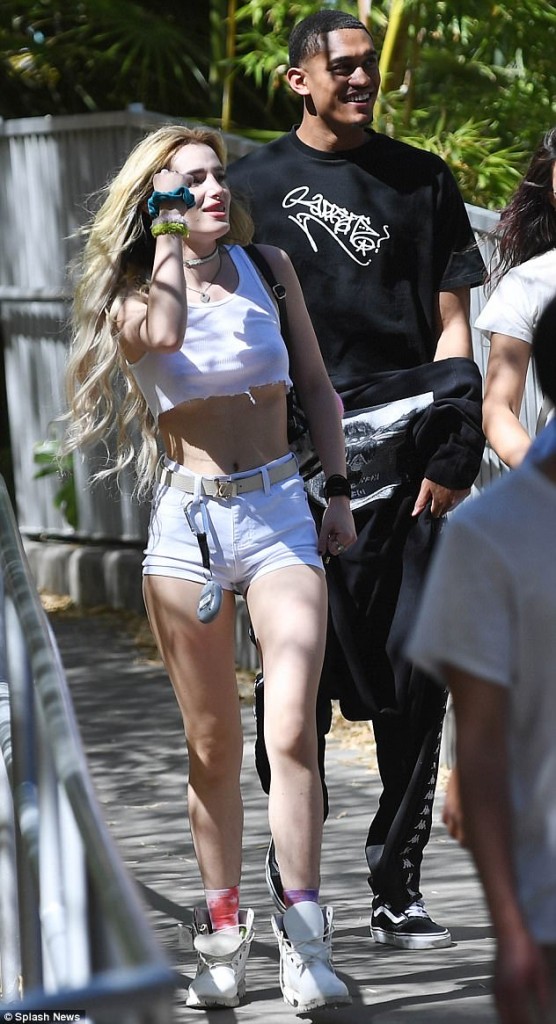 The TV star, who carried a shiny backpack, rocked pink lipstick and defined brows. Jordan kept it casual in almost all black; the Lakers star donned a T-shirt with black and white track bottoms. 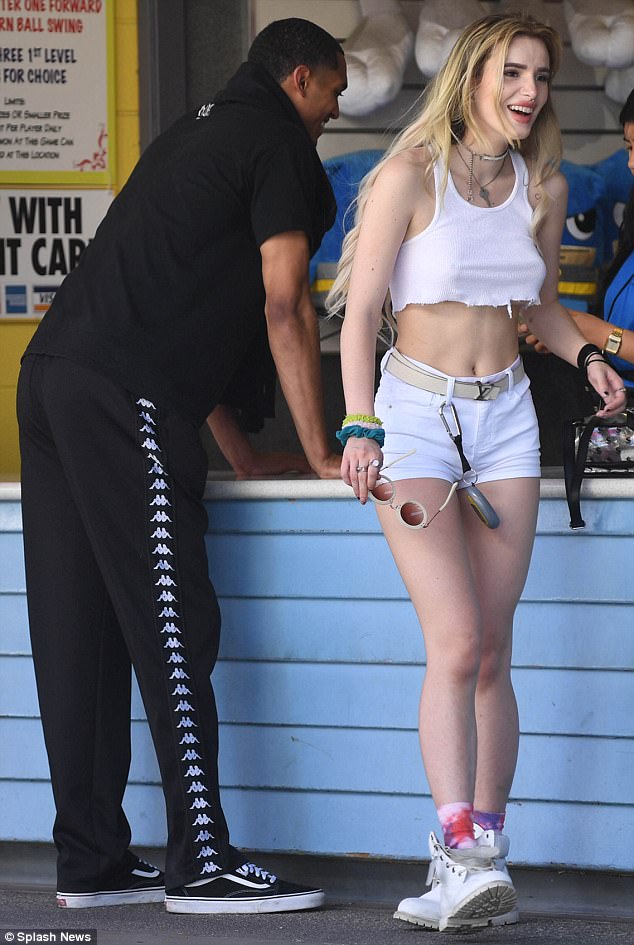 The six-foot-five-inch basketball player brought along a sweater, which he wore around his neck. Bella was previously linked to fellow basketball player, Chandler Parsons; the former duo were seen smooching at Club Mandela in Playa del Carmen three months ago. 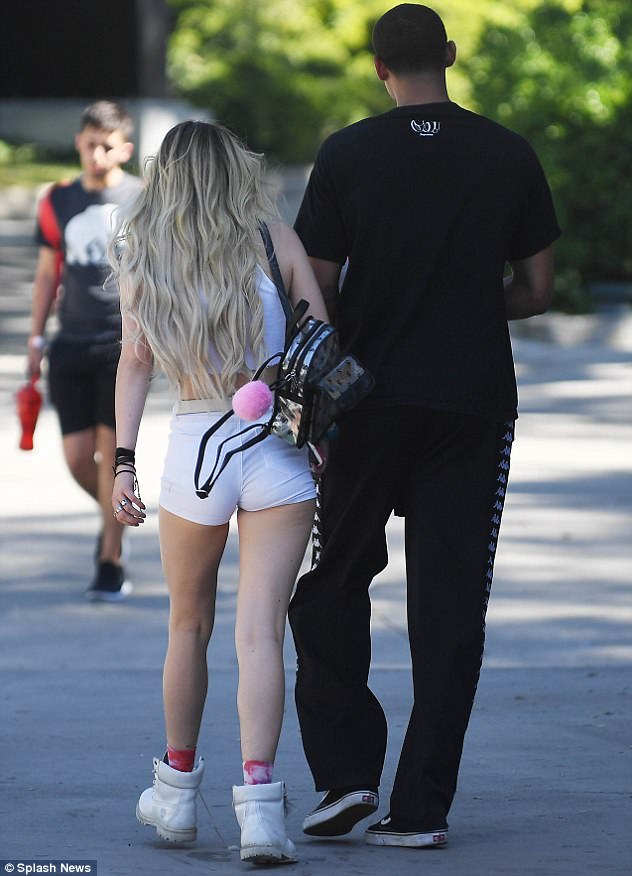 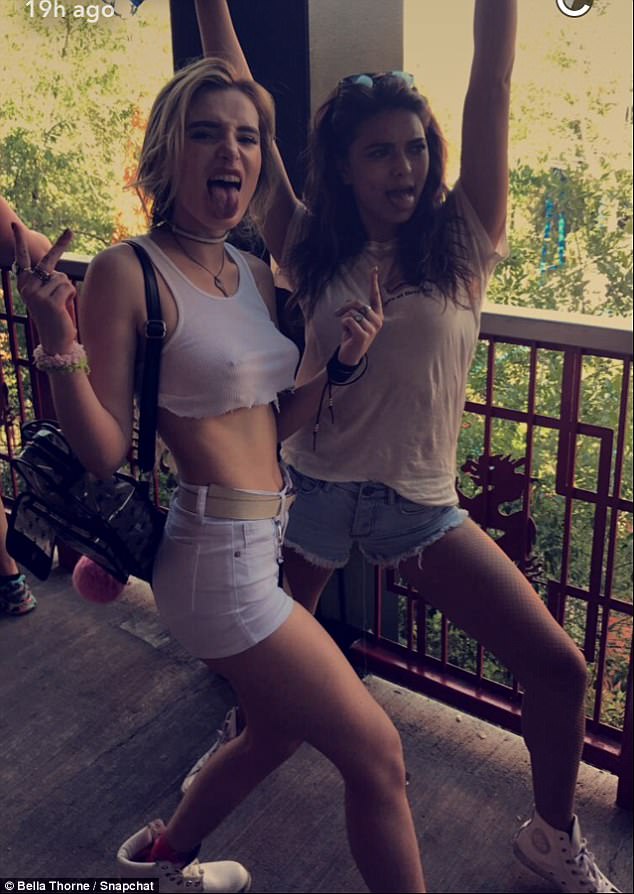 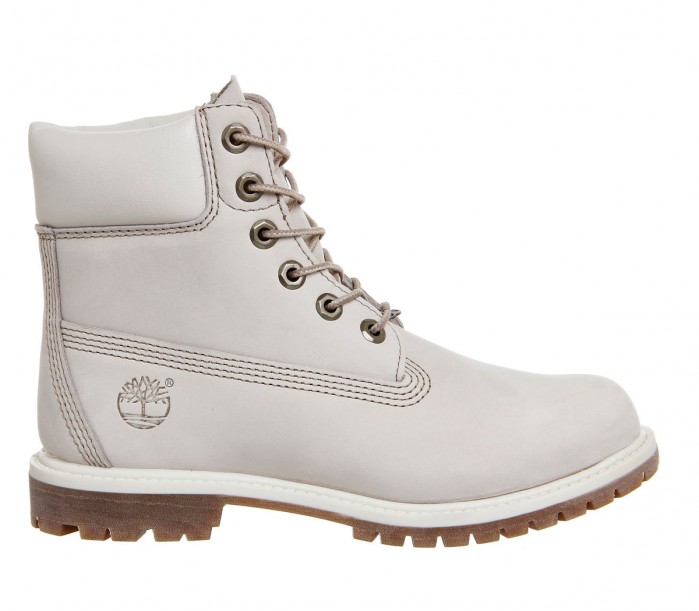 Timberland 6″ inch boots remain just as sturdy and dependable as ever, crafted in premium waterproof winter white nubuck leather with seam sealed construction to keep your feet dry, whatever the elements throw at you. Featuring a lace up front, padded collar and a rubber lug sole for traction and durability. 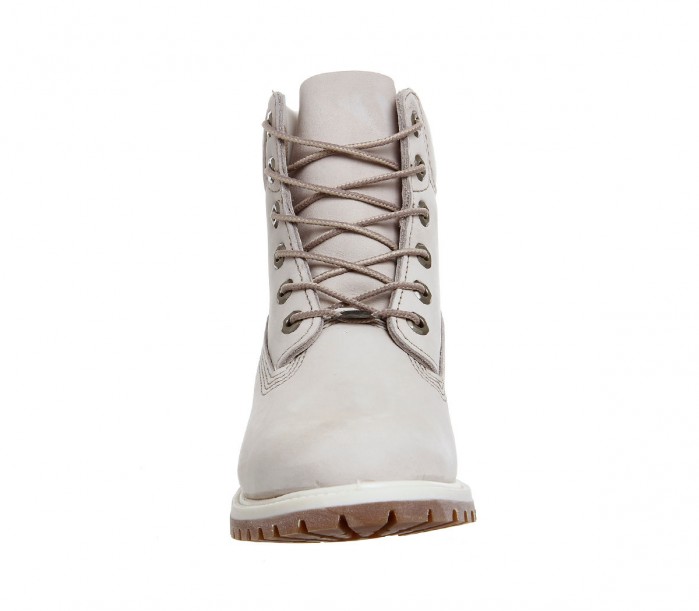 The actress rocked tiny white hot pants which she styled with a tiny white cropped tank and a pair of white Timberland boots. And it seems she’s got a bit of a penchant for Timberland boots. She owns them in pink and grey and now this bright white version too. We wonder if she went to the store and screamed ‘Give me one in every colour’. 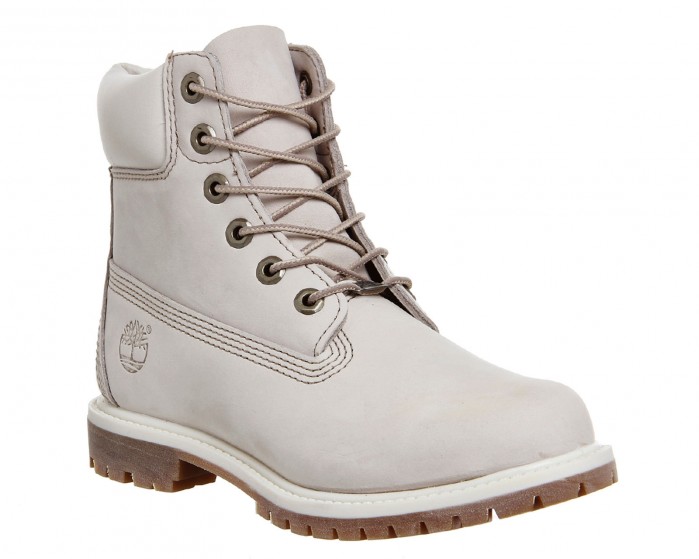 Either way if you want to lighten up this spring then why not click (right) to bag this pair at Office or head to our edit below for similar flat whites: 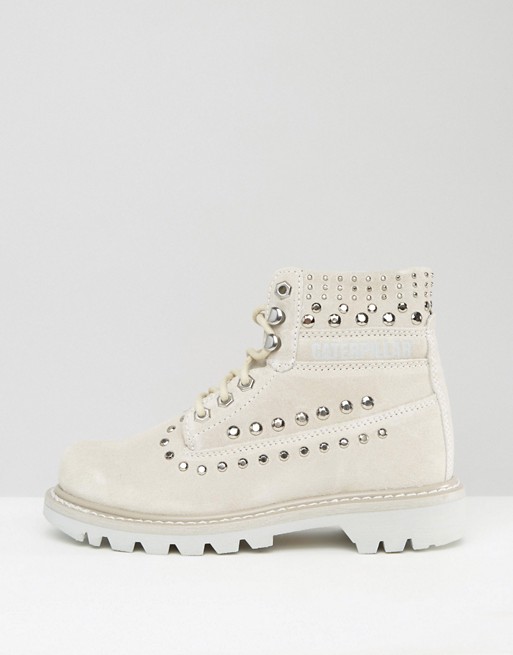 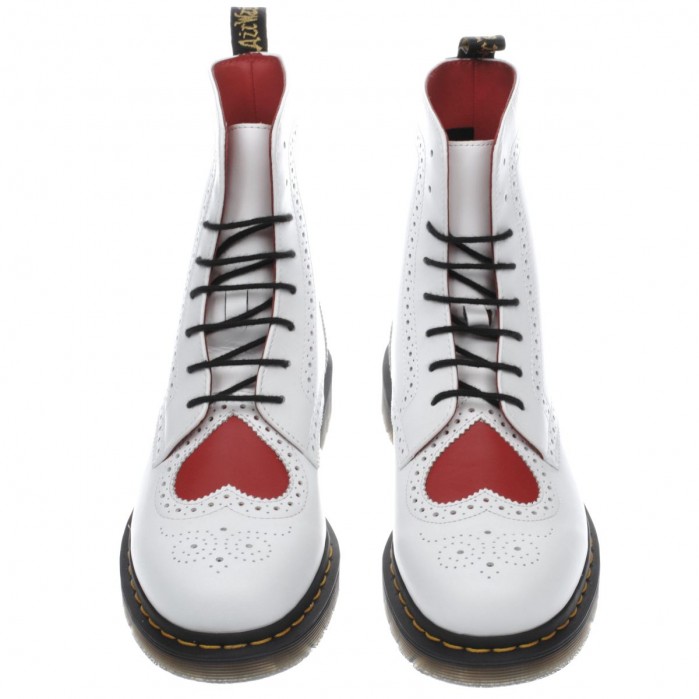