She announced she’s expecting her third child in a heartfelt Instagram post in July. And pregnant Jessica Alba showcased her baby bump as she left the Edition Hotel in New York City’s Midtown ahead of a busy day of Fashion Week appearances on Thursday. The actress, 36, looked positively glowing as she showed off her new curves in a plunging black retro-style midi-dress. 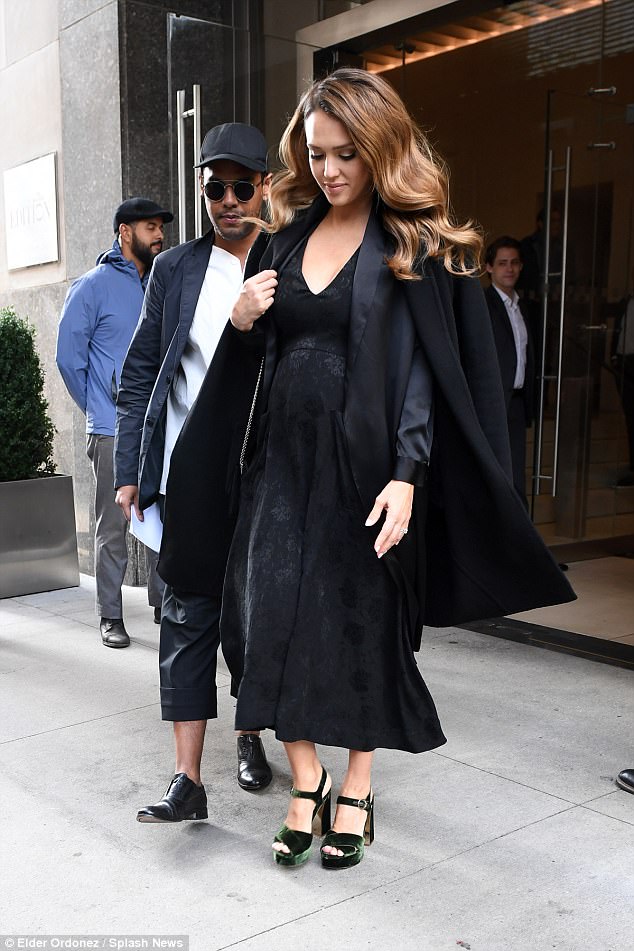 The Fantastic Four star draped an elegant black wool coat over her shoulders, while adding height to her frame with a pair of jade green suede strappy heels. Jessica carried a small black purse with a long silver chain on her shoulder. 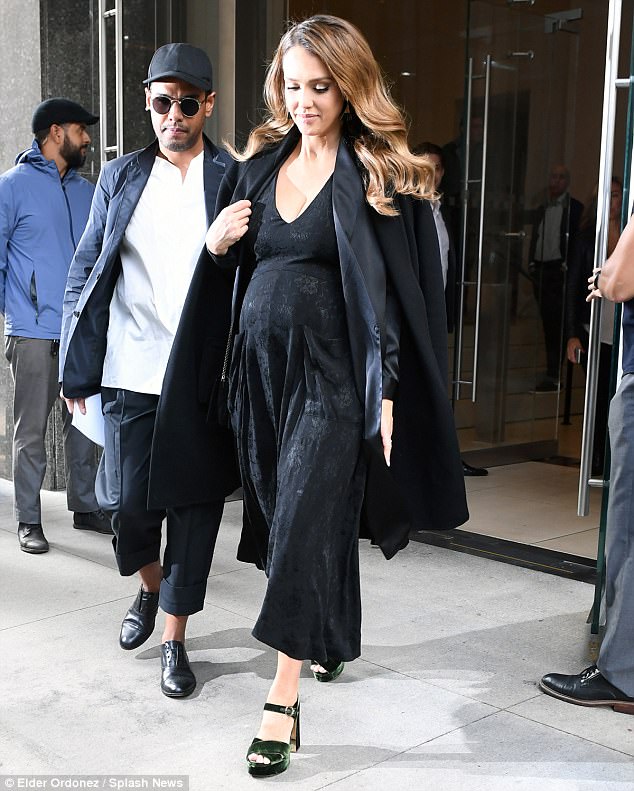 The entrepreneur’s beautiful baby bump was on full display in her stylish outfit as she emerged from her hotel with a male assistant. Wearing her light chestnut locks tousled in loose waves, the mother-of-four accentuated her striking features with natural make-up.

The Sin City actress has been married to Cash Warren for nine years and the couple has two daughters, Honor, nine, and Haven, six. Jessica recently enjoyed a night out on the town in West Hollywood on Tuesday at The Rachel Zoe Collection party. 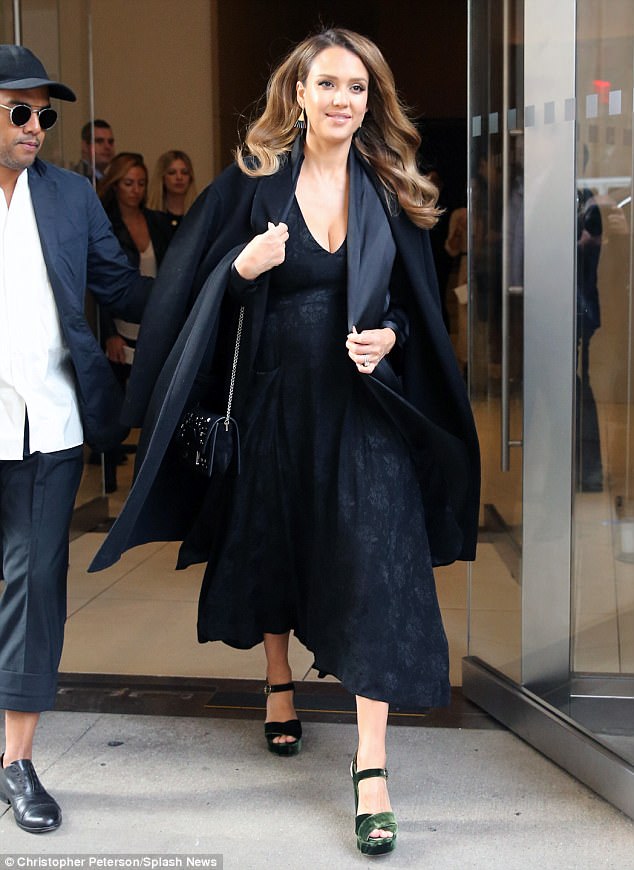 The star attended the fashionable festivities alongside Jennifer Meyer, Nicole Richie, Erin Foster, Kelly Sawyer and Sara Foster.  The doting mother has not revealed the sex of her unborn baby. 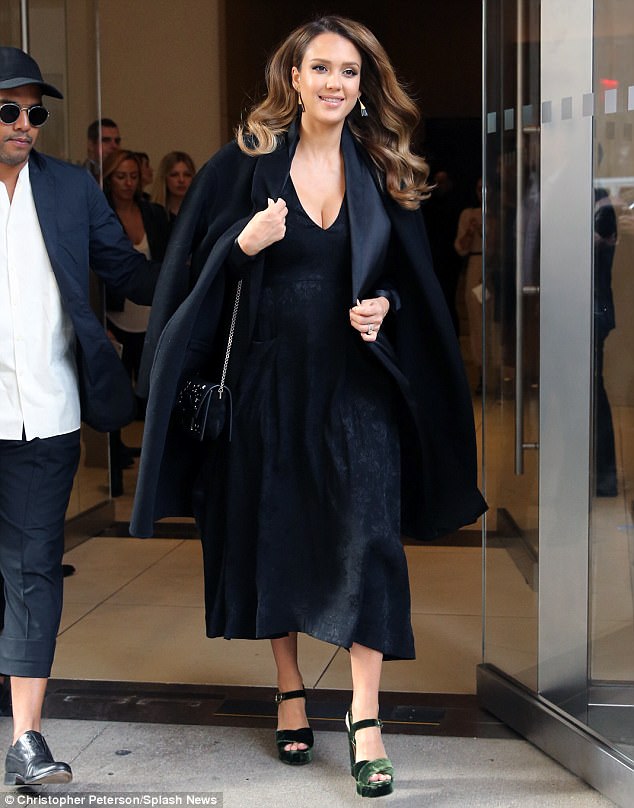 essica and Cash announced they were expecting their third child in July by posting a sweet Boomerang video of the actress with her daughters Honor, nine, and Haven, six, holding ‘1, 2, 3’ balloons.  She captioned the snap: ‘Cash Warren and I are officially going to be outnumbered!’ The couple met in 2004 on the set of Fantastic Four, and married four years later in Los Angeles in May 2008. 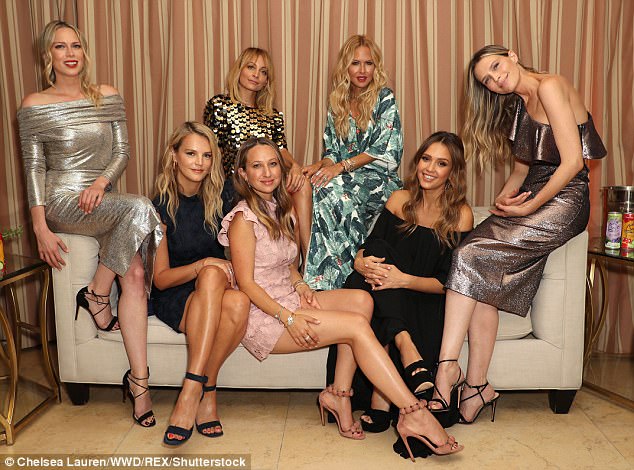 Jessica told previously People that she is always striving to be a better parent: ‘I think maybe being open and curious and trying to better myself.’ ‘I don’t try to pretend like I have all the answers and I certainly don’t think I’m perfect. ‘So when my kids say something, instead of me being so reactive, I think about how I can be better.’ 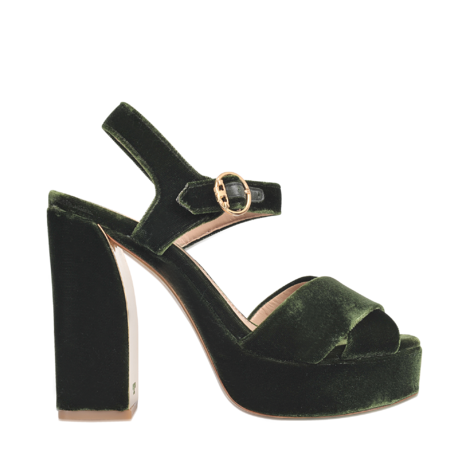 We love today’s chic all-black ensemble teamed with bottle green heels. Her plush-looking velvet platforms are by Tory Burch and have shot straight to the top of our wishlist! Autumn/winter has a real soft spot for velvet footwear trend and it’s set to be just as big this time around. Want to stay one step ahead? The good news is Jessica’s heels are available to snap now at Monnier Freres (click right Buy). Or to get a piece of the platform pie without splashing that much cash, shop the velvet shoes we’ve picked out for you in the edit below: 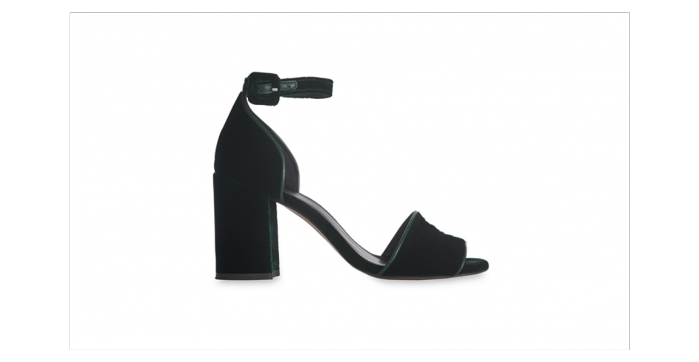 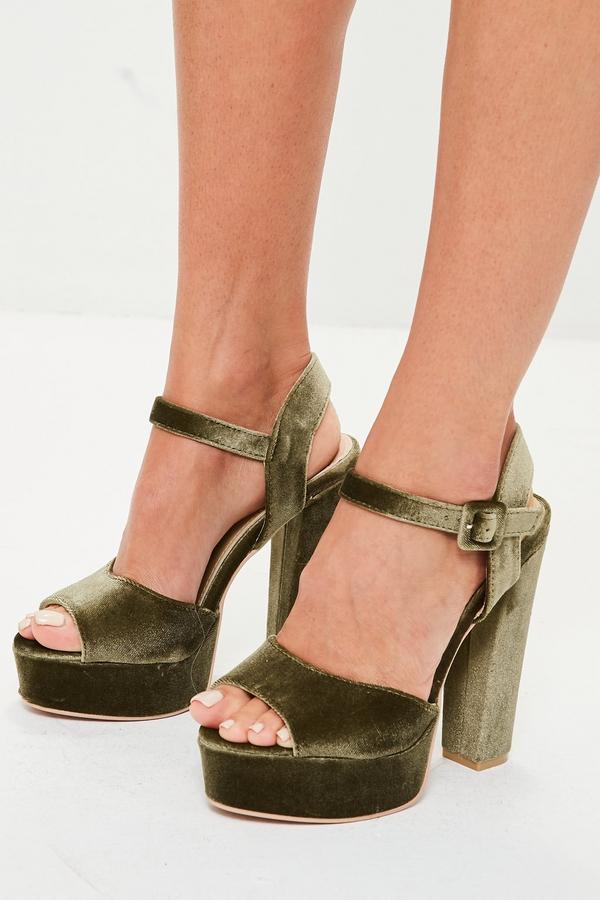