Cheryl and Liam Payne went their separate ways after the glitzy ceremony, with the Girls Aloud singer, 34, heading to their Surrey mansion while her beau, 24, stayed in a budget hotel near Heathrow.  It comes amid mounting speculation that their relationship is strained, with the songstress hitting back on Twitter at those who labeled their amorous display on the red carpet a ‘stunt’. 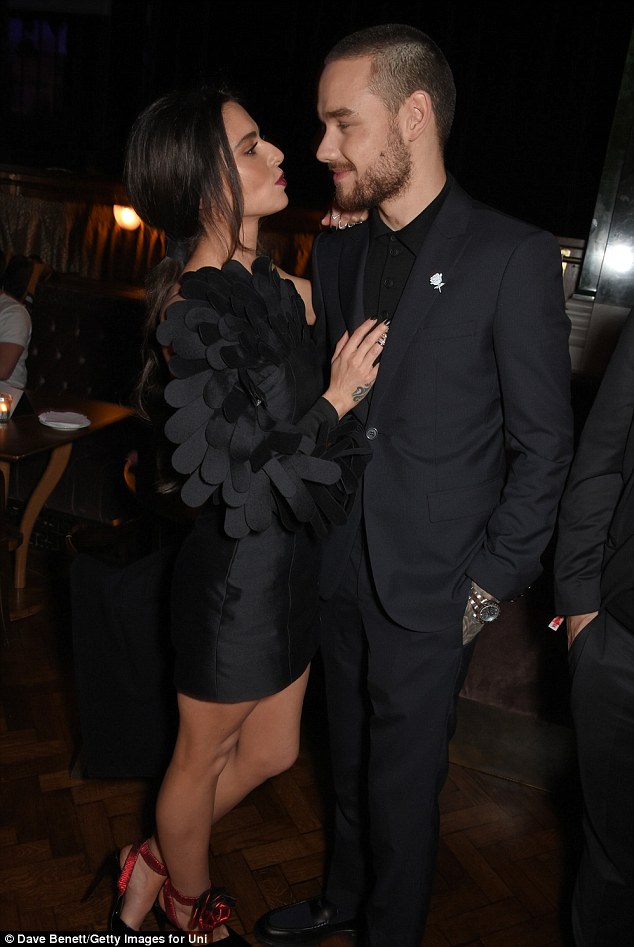 ‘Despite their over-the-top show of affection they went their separate ways. ‘Cheryl headed home to their family home, alone, and Liam spent the night at a dingy airport hotel. ‘For a couple who are going through tough times they’ve spent next to no time in private trying to fix things.’ Despite their Surrey mansion being a thirty minute drive from Heathrow, Liam opted to stay in a hotel next to the airport. 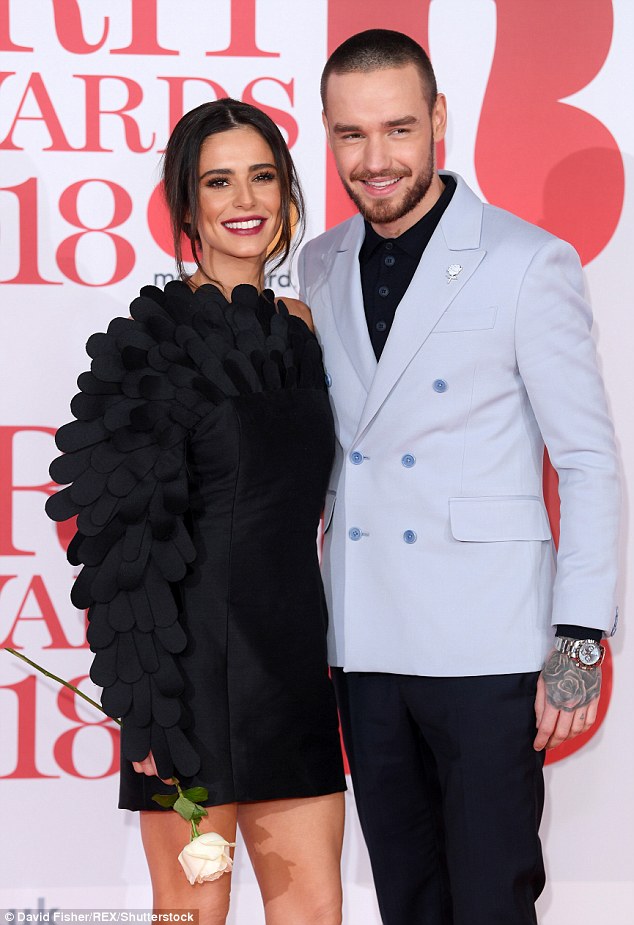 It’s been claimed their busy work schedules have put a strain on their relationship, with the couple not spending a night together since rumours surfaced that their relationship was in trouble on Sunday. A source told that Liam stayed in the hotel after the award ceremony to catch an early flight to Miami, while Cheryl’s work commitments in Newcastle earlier in the week meant they were unable to spend a night together. 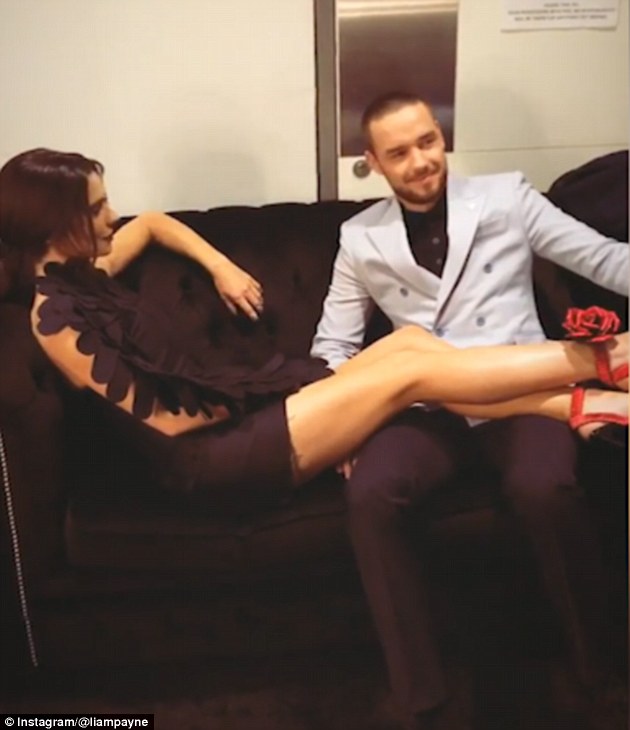 Liam brushed off split rumours as he took to Instagram to show him picking up some items for his 11-month-old son Bear in a baby boutique after landing in the USA on Friday. Sharing a snap of himself perusing a selection of baby clothes, the doting dad captioned the image ‘Bear shopping’, using the emoji instead of his son’s name. Letting his fans know that he had flown Stateside to shoot a new music video, the One Directioner posted a clip of himself riding in a taxi on his Instagram story. He enthused: ‘Just landed here in Miami, and we have Michael Jackson on the radio which is always nice. ‘It’s sunny outside and I’ve got a cardigan on, which all makes perfect sense. Music video time.’ 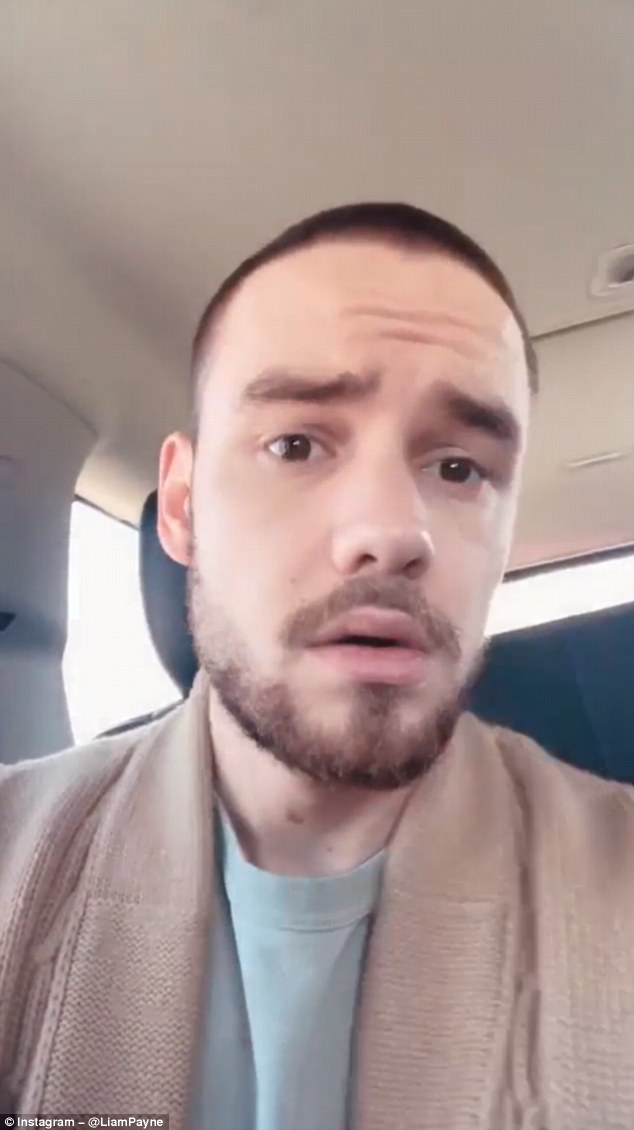 The couple attempted to downplay the allegations when they put on an overzealous display at the BRIT Awards on Wednesday, though insiders have branded the whole thing a ‘stunt’.  A source told the publication: ‘Cheryl and Liam’s friends say things aren’t good between them and have made it clear their relationship will soon end. ‘But with a single to promote, Liam was not going to miss the opportunity, and having Cheryl with him gives him even more limelight. ‘They are trying to work things out and want to be together for their son Bear’s first birthday next month. But things are very strained.’ 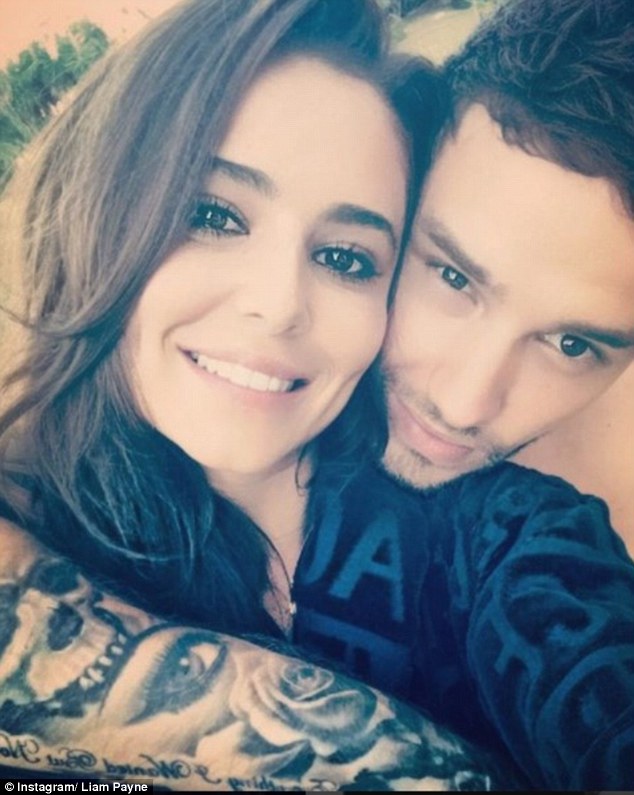 Despite the claims, Cheryl took to Twitter to defend her relationship with Liam on Thursday and denied that they were on the brink of a break-up.  Posting to her 6.4million followers, she wrote: ‘Oh stop no one cares who’s been speculatively arguing or not in their relationship use your platform to put something productive in your columns.  ‘I opened a centre this week that could help thousands of youth!!!!’ She added: ‘…Oh and your ‘stunt’ theories are just ludicrous and a bit weird’.  While Liam gallivants across the globe to promote his new music, Cheryl is thought to be spending much of her time at home on her own with their son Bear, because she would rather stay in watching TV than go out to showbiz parties. 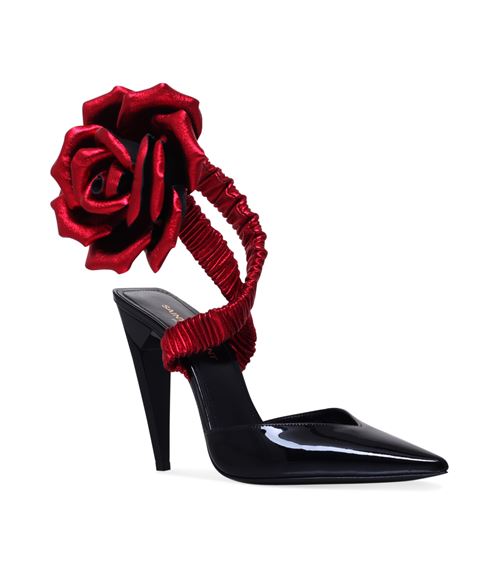 The singer joined beau Liam Payne for the BRIT Awards and we can’t help but be drawn to her shoes. Saint Laurent are on point with the Freya sandals that feature an eye-catching rhinestone-embellished leather rose on the elasticated ankle straps. The combination of black and red make for a striking contrast of colours that never go out of fashion, so investing in these heels will mean you can easily wear them with multiple trends. 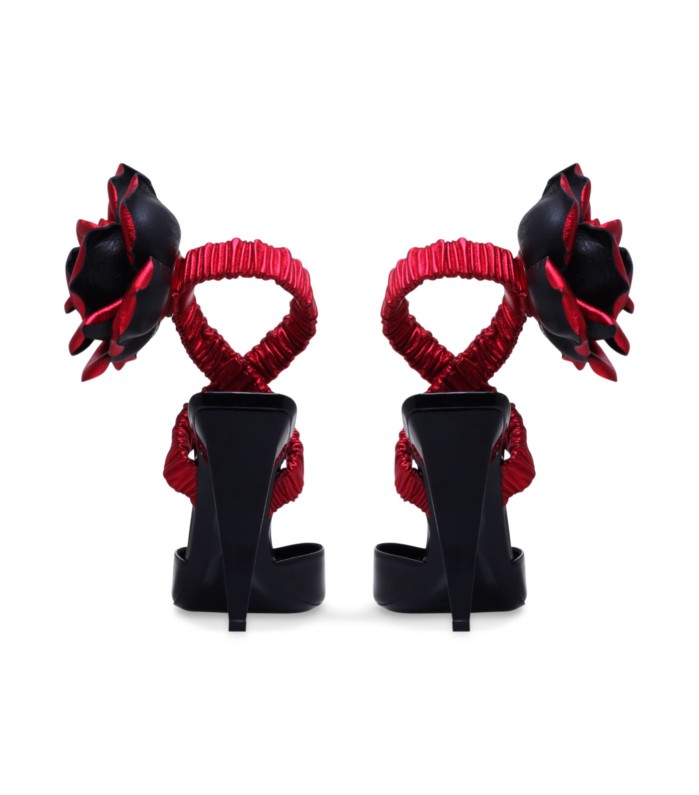 As statement as they come, these striking pumps from Saint Laurent are a testament to the brand’s sophisticated and against-the-grain style. The pointed-toe design features a low-cut V vamp accented with an elasticated ankle strap and a stunning, rhinestone-embellished leather rose. The perfect complement to an evening mini dress. 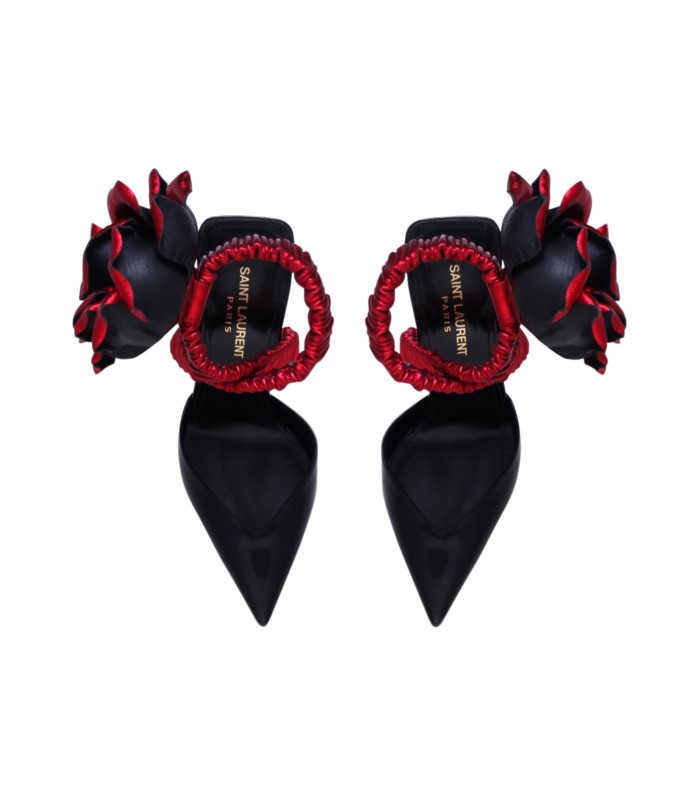 A pointed toe is a great option to wear for an evening look like Cheryl’s, so give yourself a celebrity status and shop the heels now at Harrods (click ‘Buy’). But if the price tag is slightly eye-watering why not get the look for less and shop the carousel below: 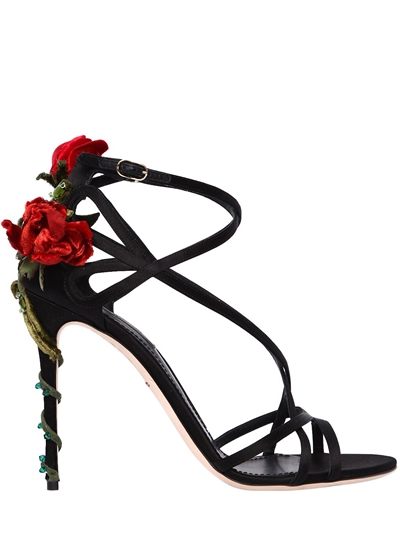 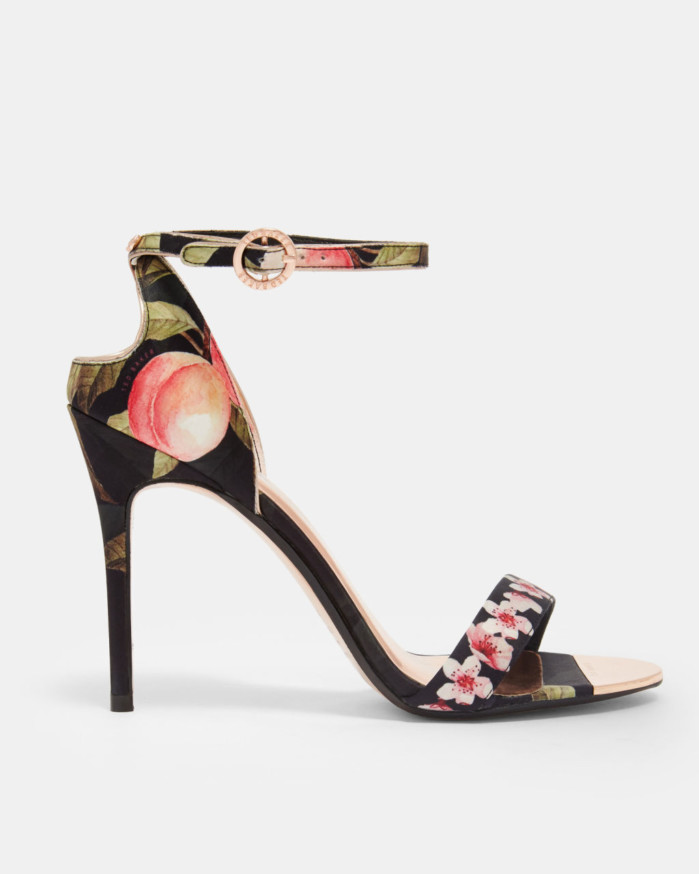