She is set to appear on the tenth series of Dancing on Ice in early 2018. And Brooke Vincent was definitely looking in the festive spirit as she attended the Manchester Christmas Lights event on Saturday. Manchester celebrated the countdown to Christmas with a free celebratory show in Albert Square – featuring performances from Pixie Lott and Sigala. 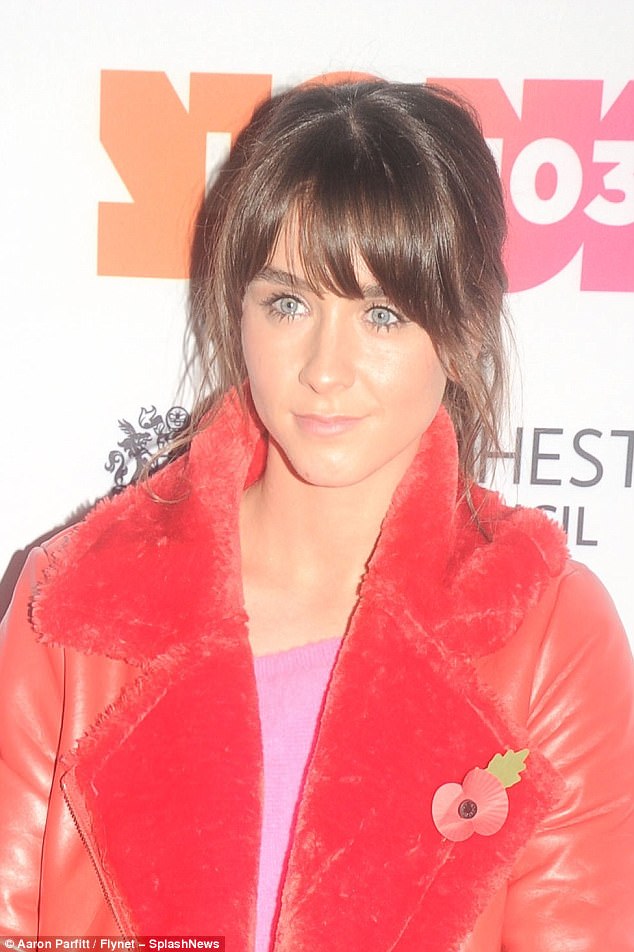 The 25-year-old actress was all smiles as she graced the red carpet in a matching deep red biker jacket and suede over-the-knee boots. Contrasted with a pink jumper dress, the Coronation Street star swept her brunette tresses in a ponytail – giving room for her gorgeous facial features.

Brooke accentuated her natural beauty as she wore mascara on her lashes and rose blush on the amples of her cheeks – with her lips were painted in faint pink. This sighting follows her rehearsals for Dancing On Ice at the Silver Blades Ice Rink in Altrincham on Thursday – with just three months to go before the launch.

The actress kept things low-key in grey leggings and a bright red jacket as she met former X Factor contestant Jake Quickenden, 29, who was also ready for action in a tracksuit with on-trend trainers in place. Brooke appeared simple in her tight grey leggings while she ensured she made a statement in her bright red coat and funky green trainers. 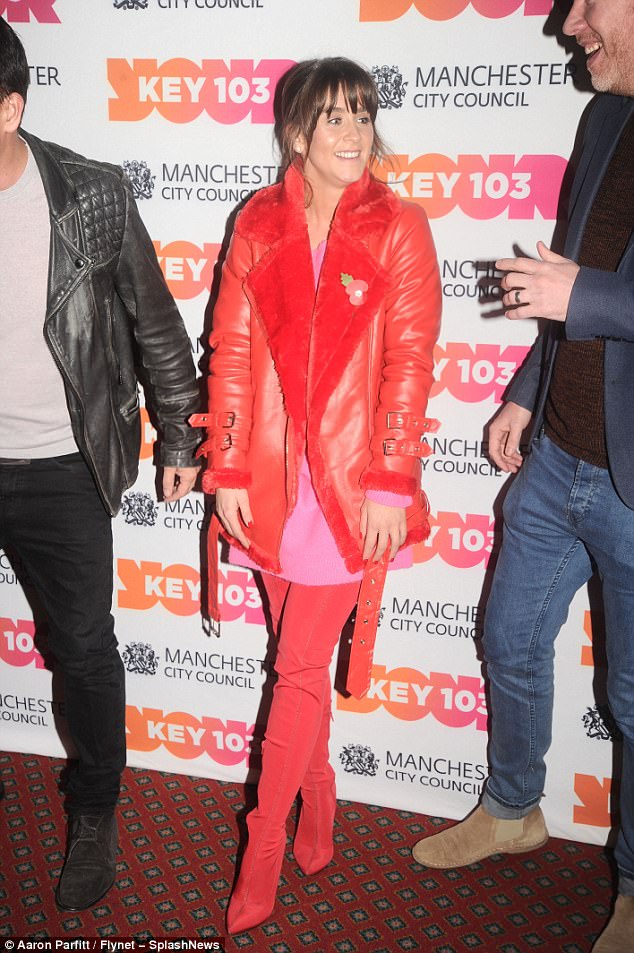 Jake meanwhile looked overjoyed to see his new castmate as they embraced one another with a warm hug ahead of the rehearsal. He sported a matching tracksuit with a navy body and white stripes extending the lengths of the leg and around the biceps.  On Monday, Brooke was the first celebrity confirmed for the forthcoming tenth series of Dancing On Ice. 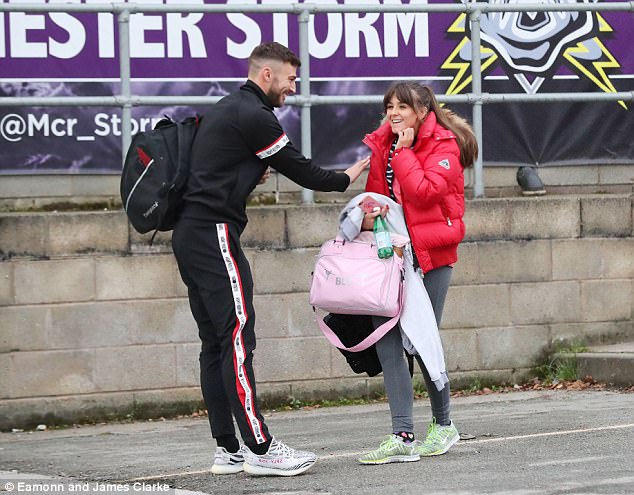 The actress – who plays Sophie Webster on the ITV soap – is excited about appearing on the revived skating show, but rather than setting her sights on winning, she’s content to just impress her friends. Appearing on Monday’s edition of This Morning, she said: ‘I love a challenge and ice skating, what an amazing skill. I’m more impressed with the fact I can go with the girls and be like, “I can do this, I can do that”, and they’ll be holding onto the sides.’ She admitted she has dreamed of appearing on the show – which will return next year after four years off screen – for a long time. 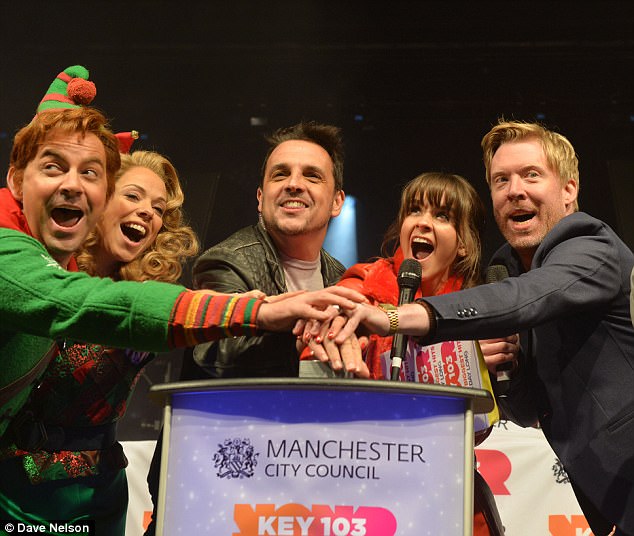 She added: ‘It’s exciting because I’ve watched it for years and always thought it would be so good one day to do that and dress in those outfits and learn such a massive skill from two of the best, I’m just really excited.’ 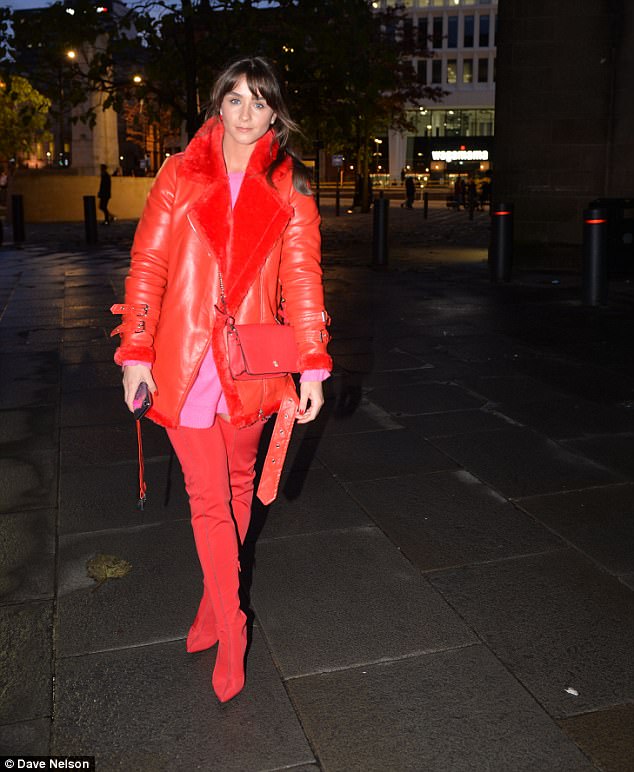 ‘I just feel so lucky that I’ve been asked to do it. I’m so buzzing, I can’t even explain. It’s my mums favourite!… I’ve been wearing (my fiancee) Danielle’s tights to get used to the lycra!’ 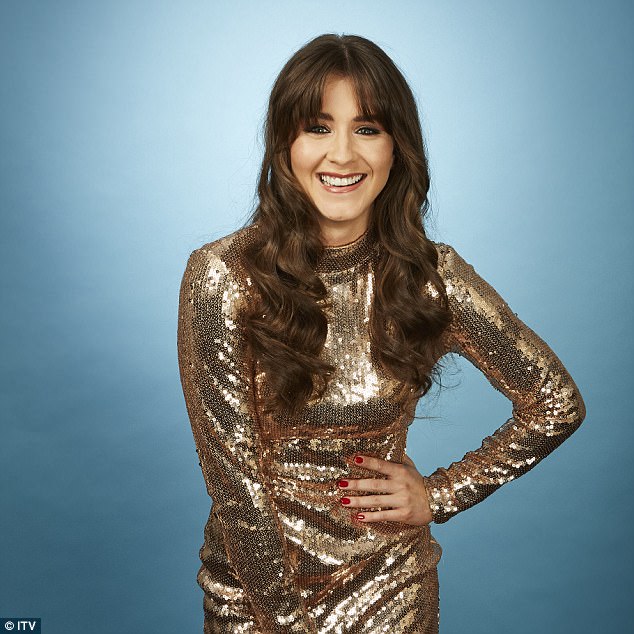 On Monday, Brooke was the first celebrity confirmed for the forthcoming tenth series of Dancing On Ice. 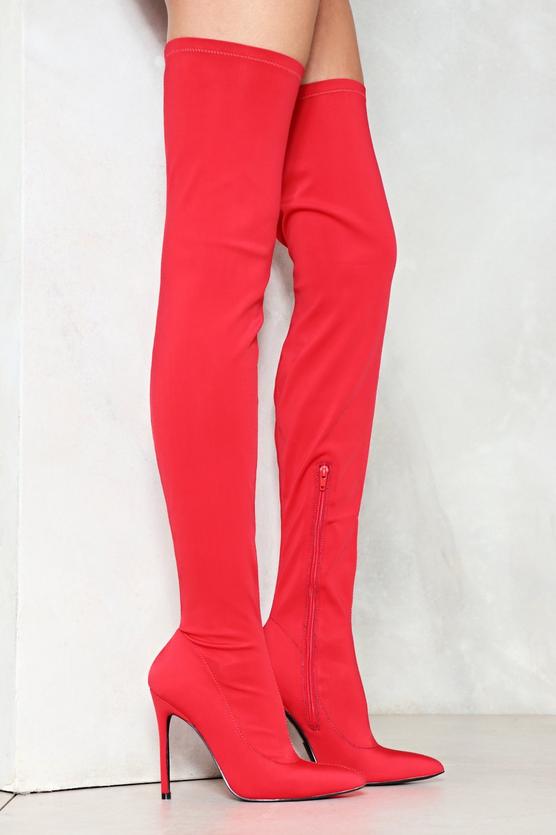 Posing up a storm at a Christmas event, Brooke opted for a red-to-toe look with a neon pink dress, red shearling jacket and Nasty Gal’s red over-the-knee boots. We can’t get enough of this look! Don’t be shy. The Hidden Talent Boot comes in a knit and features an over-the-knee sock design, stiletto heel, and almond toe. 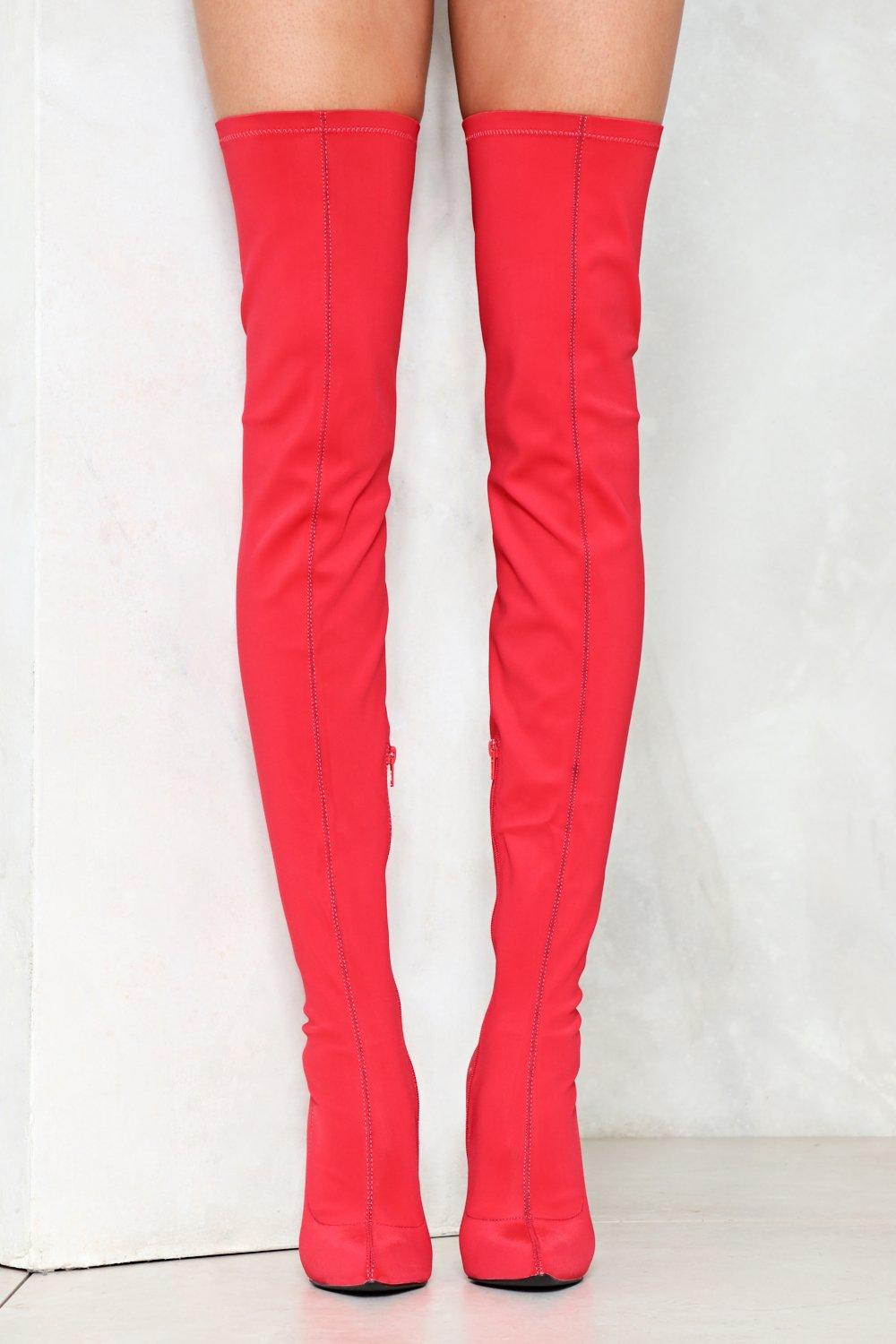 Seen on everyone from Gigi Hadid to Khloe Kardashian, RiRi to Jennifer Lopez, the over-the-knee boot is as essential for AW17 as that puffa jacket you’re diligently carting around (not very tube friendly, right?) and Brooke Vincent may have just stumbled across the perfect pair. 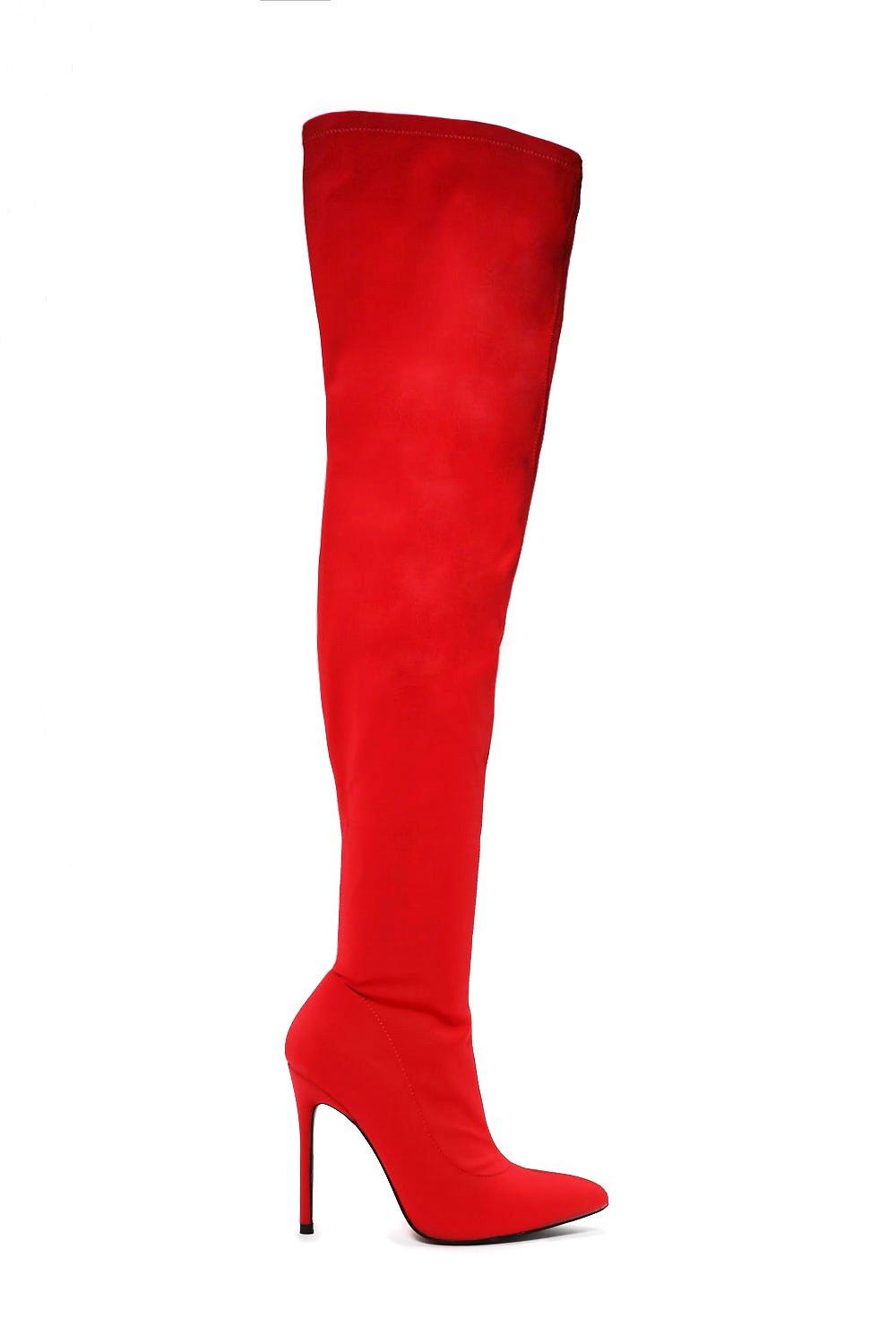 Costing $59, you can nab these bad boys now by clicking the link to your right. Alternatively, shop our carousel of lookalikes below! 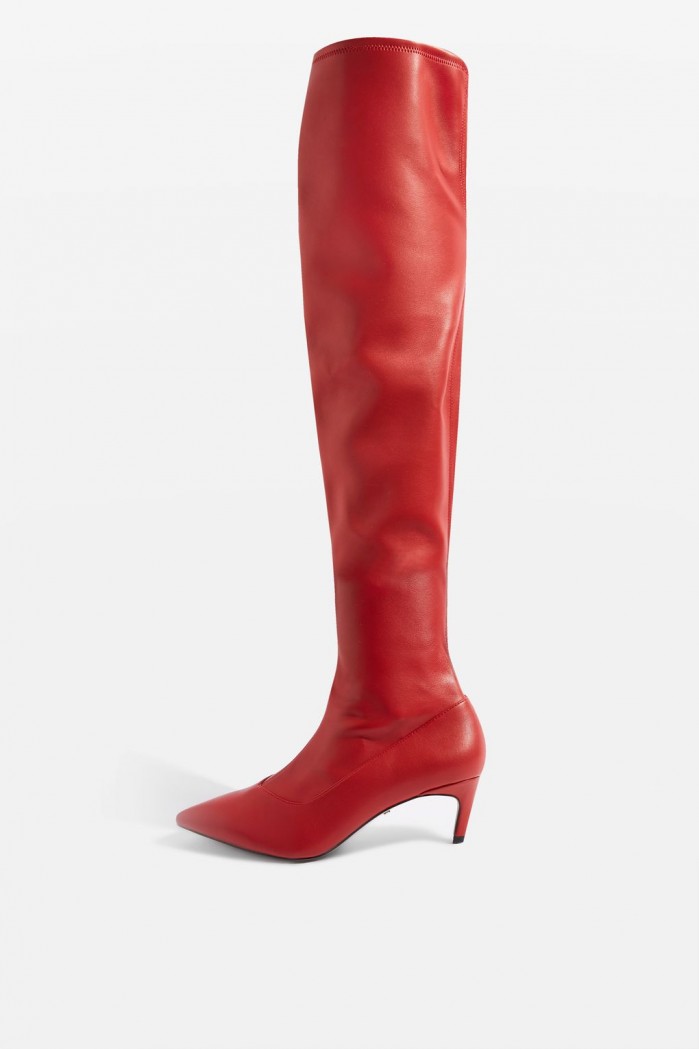 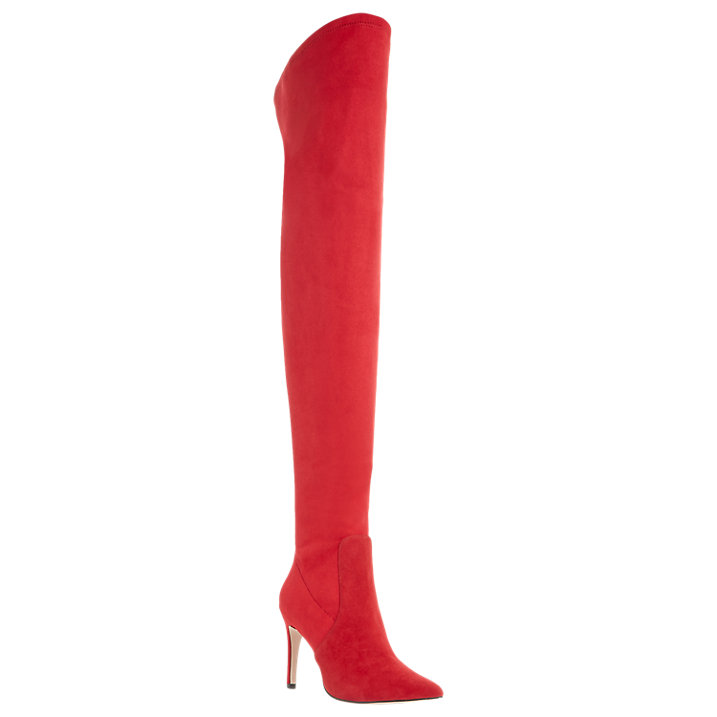