She’s known for always stepping out with a golden glow. And proving the lengths she will go to when it comes to her tan, Charlotte Crosby posed topless mid-bronzing session to reveal it’s usually her beau Stephen Bear who helps to fake tan her back for her.  The reality star, 27, was left without her beau, however, and attempted to achieve her sun-kissed look solo, but admitting doing so without being left with any tan lines had been a struggle. 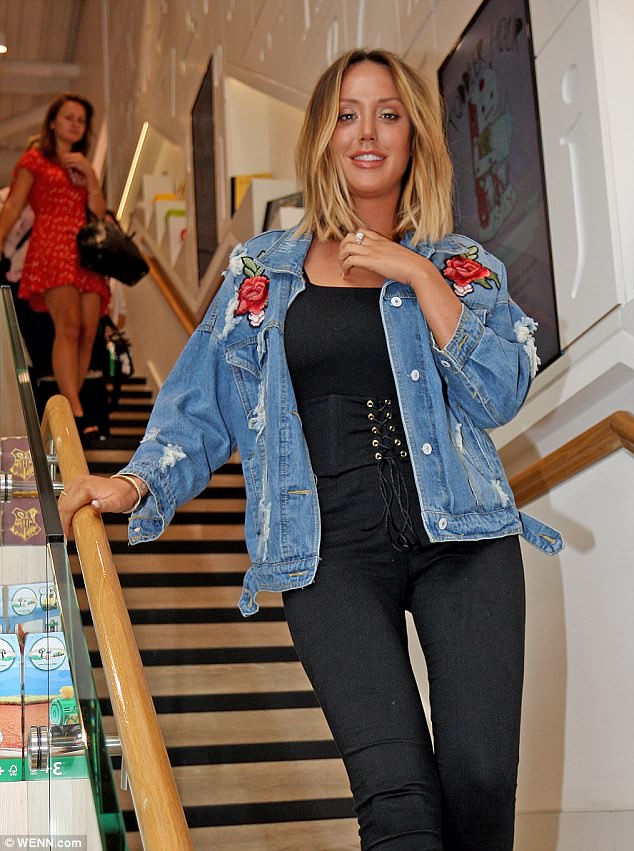 She was sporting a tanning contraption that resembles an oven glove and is used to ensure a streak-free application of fake tan to the back. Covering her cleavage, Charlotte teased a look at her slender (and tan covered) frame, as she appeared to pine after her boyfriend. 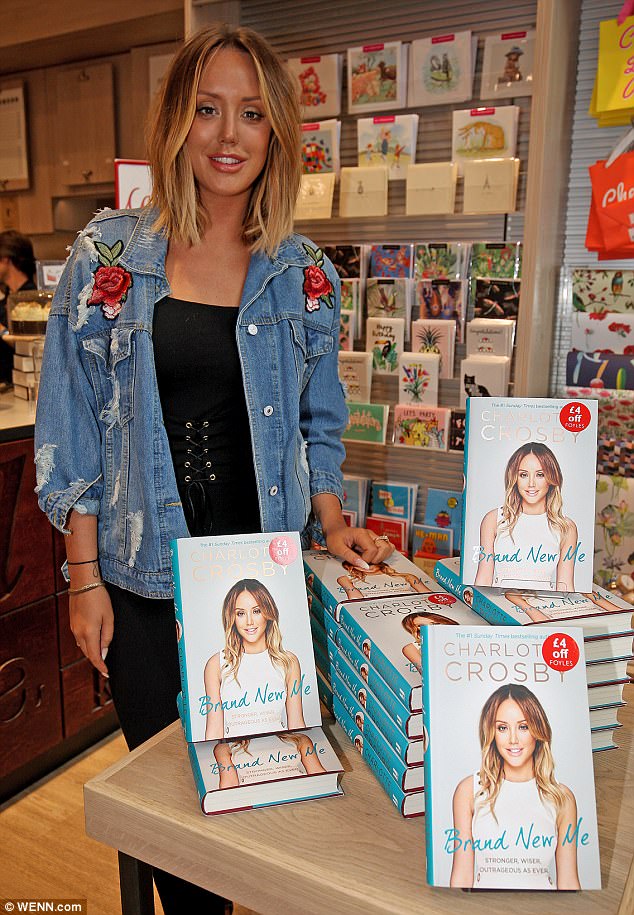 She penned alongside her photo: ‘No Bear to tan me back tonight,’ before adding the hashtag: ‘#godforbidifigotanytanlines.’ Charlotte’s beautifying efforts came before she hit the road for the book signing of her new autobiography titled Brand New Me. 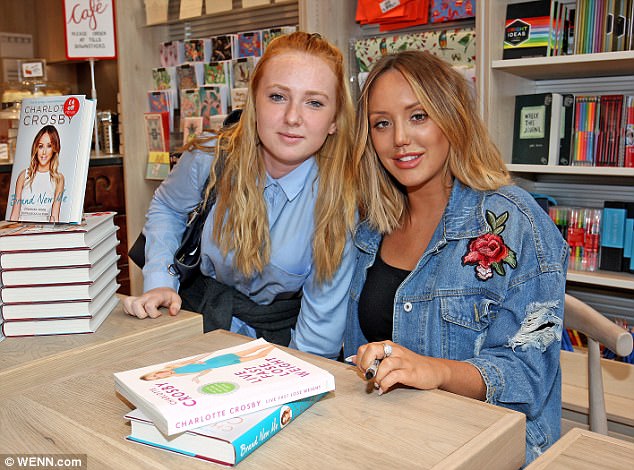 She kick-started her book tour with a meet and greet with fans in Chelmsford and dolling herself up for the occasion, the former Geordie Shore star slipped into a slinky jumpsuit that highlighted her gym-honed physique. And wanting to draw further attention to her figure, Charlotte accessorised her simply stylish all-in-one with a corset waist belt.  She added some height to her ensemble with a chic pair of ruffled grey barely-there heels and slung a denim jacket over one shoulder.  Sporting her shoulder-grazing tresses in her trademark tousled waves, Charlotte finished off her look with sleek make-up. 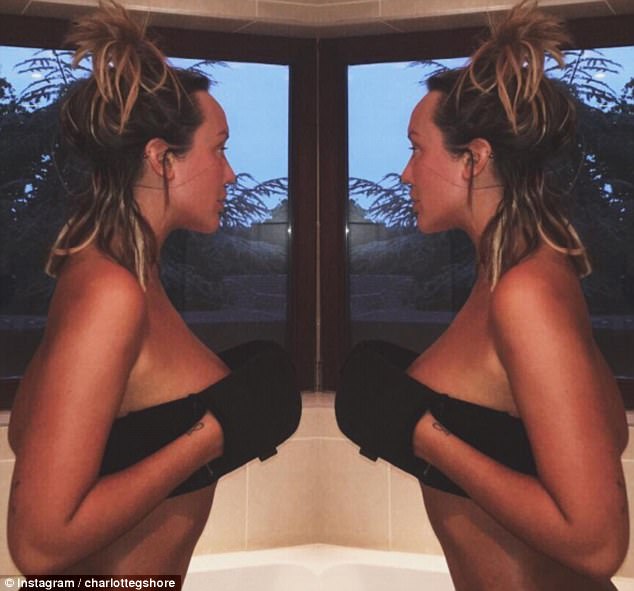 Stepping in front of the camera while appearing to be nude from the waist up, Charlotte strategically covered her modesty as she posed side on. 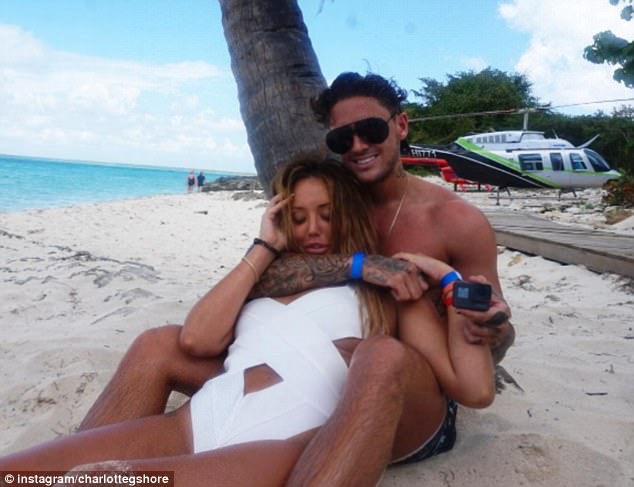 Holding onto a copy of her new release, Charlotte told her 5.9million Instagram followers that she was ‘overwhelmed’ with the response to her book.  She said: ‘The book tour started today! ❤ I am so so so so overwhelmed with the response from Chelmsford and Reading today!’ Charlotte’s second autobiography is the follow up to her first title, Me Me Me, and prior to its release she had released excerpts – giving fans a taste of what they can expect to read. 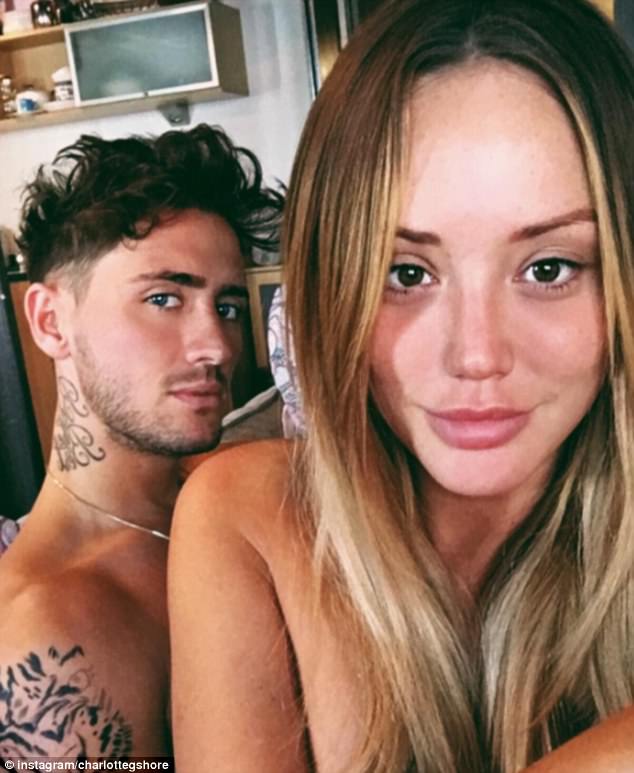 In the book, the former Geordie Shore star makes a series of revelations – detailing her battle with depression following her ectopic pregnancy last year and her romance with Bear. 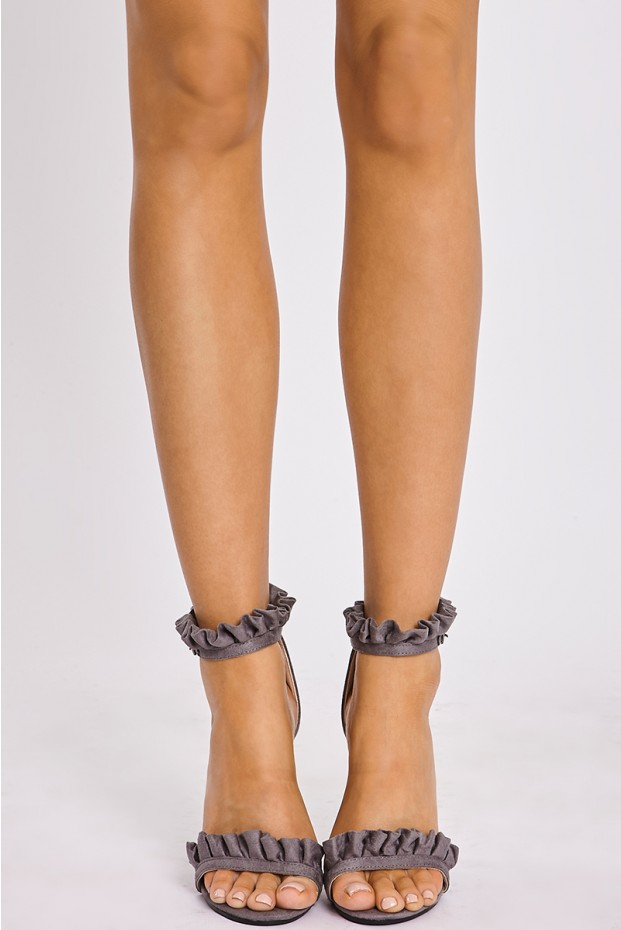 Show your shoe’drobe some lovin by getting these open toe heels in there RN! In a luxe faux suede fabric featuring sassy ruffle detail and zip closure, these heels have got us seriously wanting them! Team with a cute dress for a mega style steal! 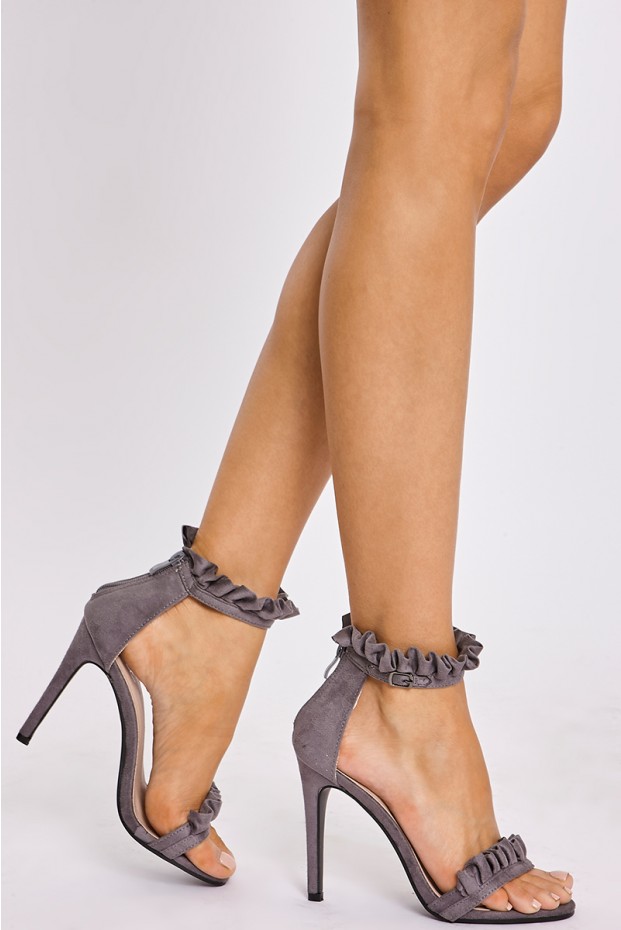 Charlotte works the trend perfectly with a pair of strappy sandals which she used as a stylish footnote to her black and denim ensemble. Nice work Miss Crosby! Her particular pair are from InTheStyle (click Buy) and we have rounded up a whole host of similar strappies in a variety of colours in the line up below – all for under £46! 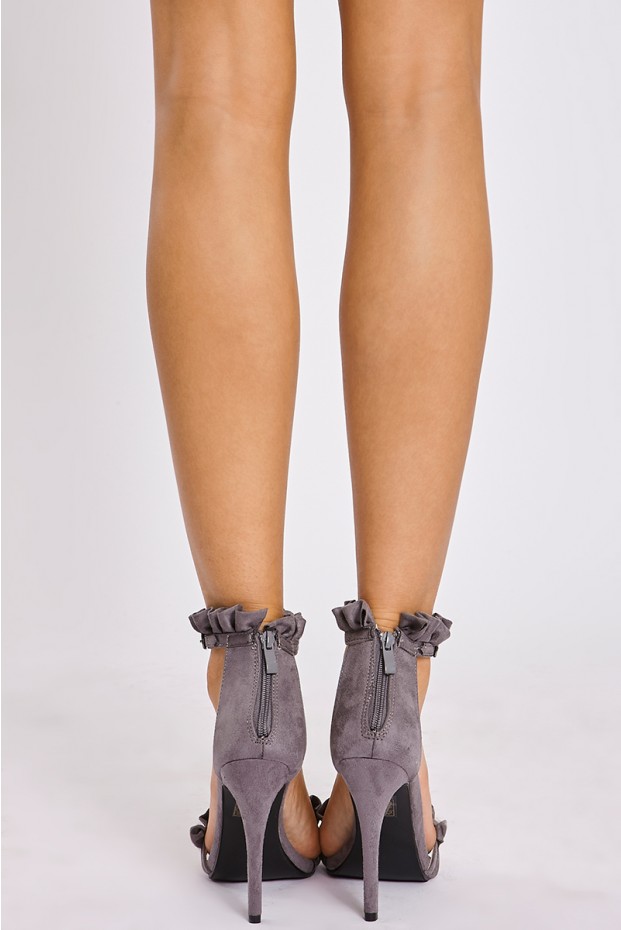 Use yours to finish a jeans and a top combo like the star or buddy them up with a figure hugging dress for date night. 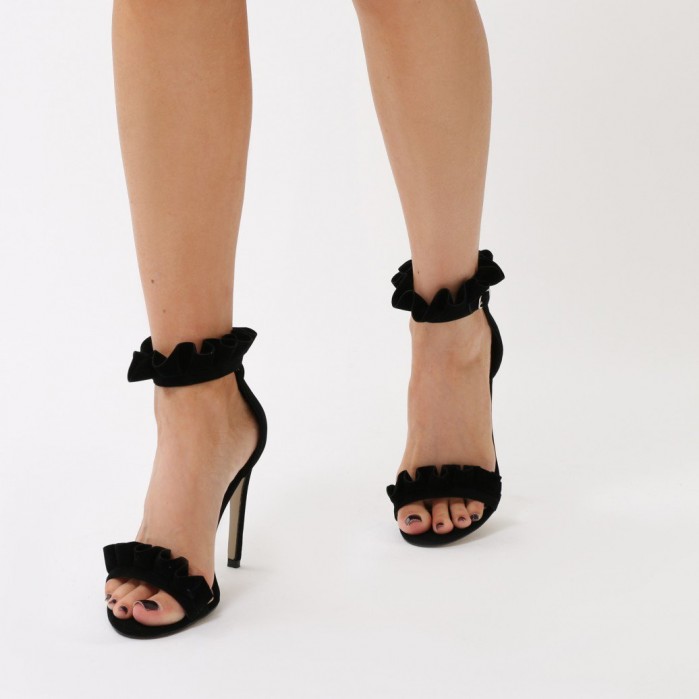 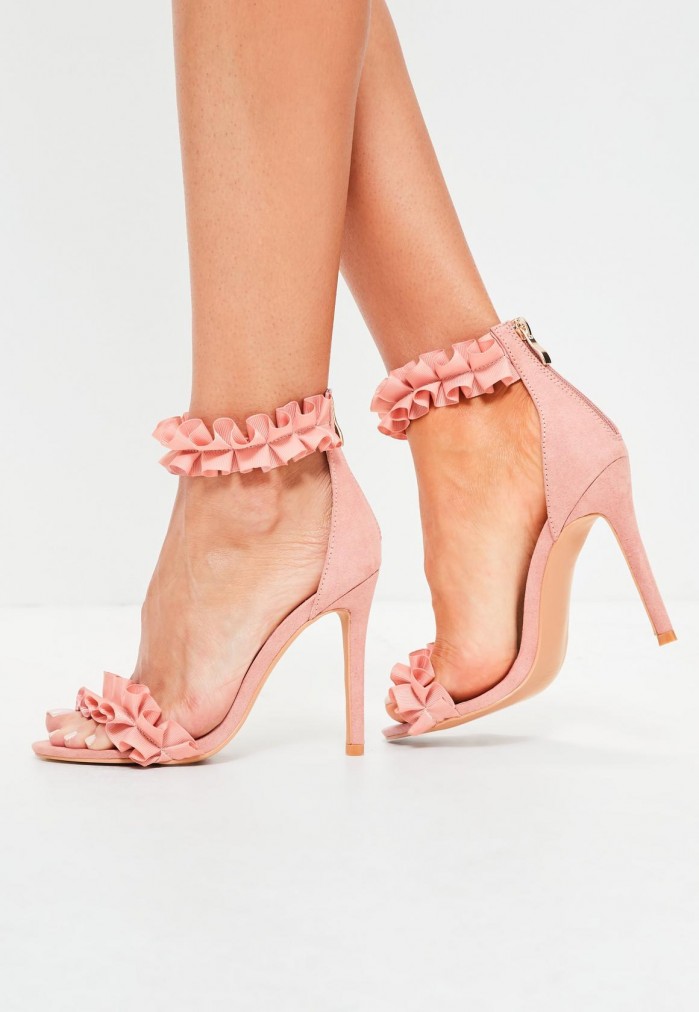