She is enjoying a little downtime in-between movie projects. And Jennifer Lawrence was spotted out strolling in the sunshine on Thursday and Friday, showing off two stylish looks as she walked in Central Park, New York. The 26-year-old walked her dog Pippi on Thursday, wearing a silky cream romper for the outing as she was joined by a female companion. 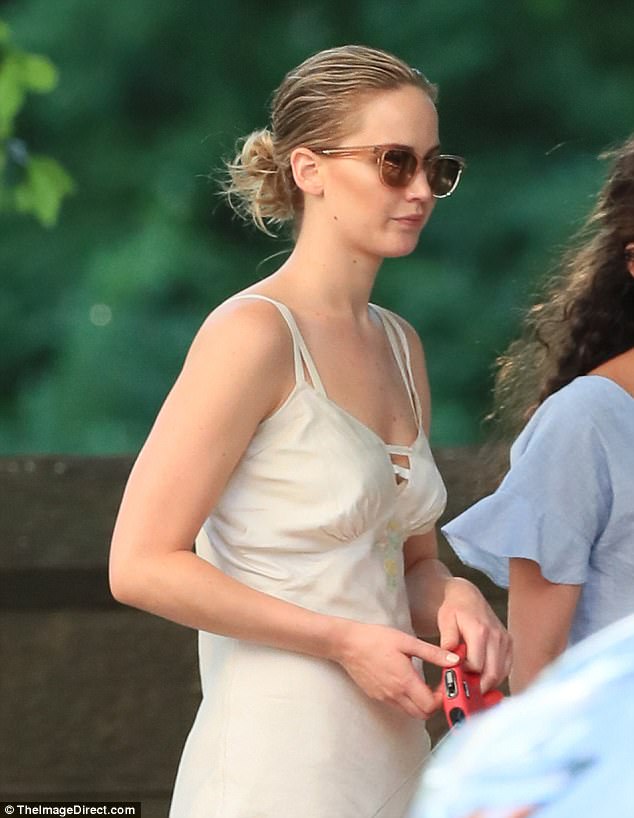 Her shoulder-length locks were swept back in a casual bun and she donned some trendy sunglasses. Completing Lawrence’s look was a pair of metallic loafers. The following day Lawrence looked gorgeous as she stepped out again wearing a white off the shoulder top with high-waist cuffed jeans. 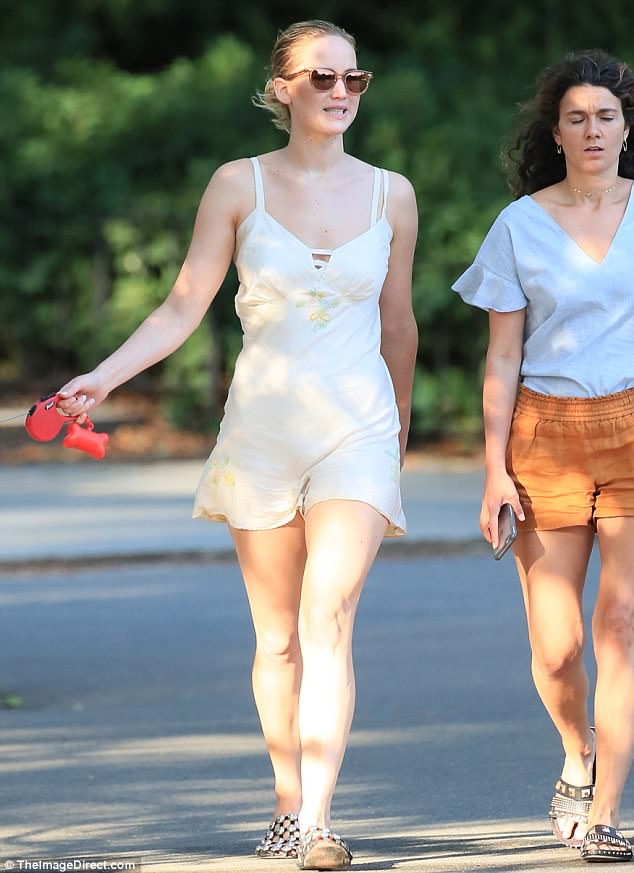 This time the actress wore cat-eye shades and some summery sandals. Last week the Hunger Games star suffered a mid-air scare while travelling on a private jet from her home town of Louisville, Kentucky to New York. The pilots were forced to make an emergency landing when one of the engines failed at 31,000 feet. 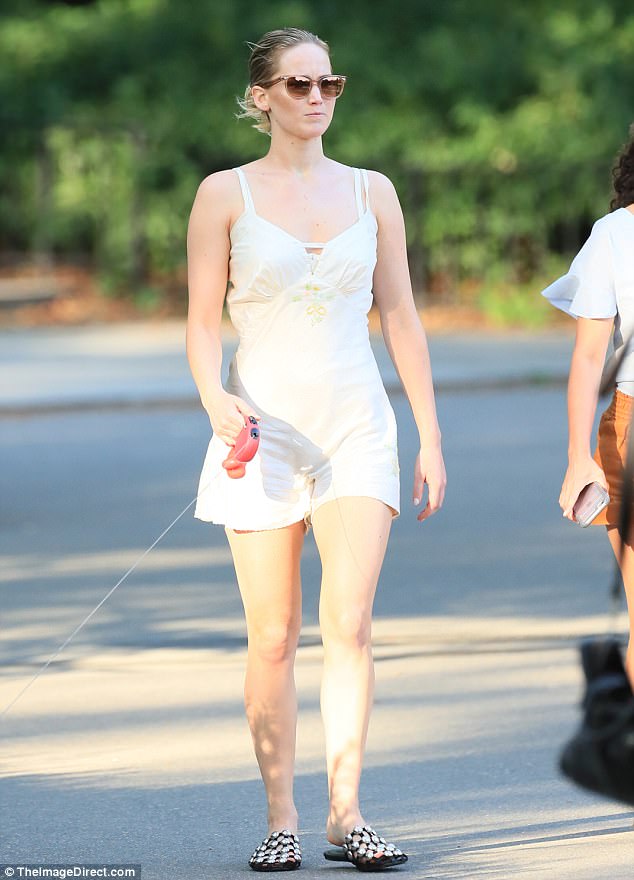 But in a terrifying turn of events the other engine failed when the pilot attempted to make the unscheduled stop. Fortunately, the plane landed safely in Buffalo, New York, and was greeted by multiple emergency vehicles. The Joy actress, who is currently dating director Darren Aronofsky – recently spoke about how she ‘works very hard’ to keep her life private. 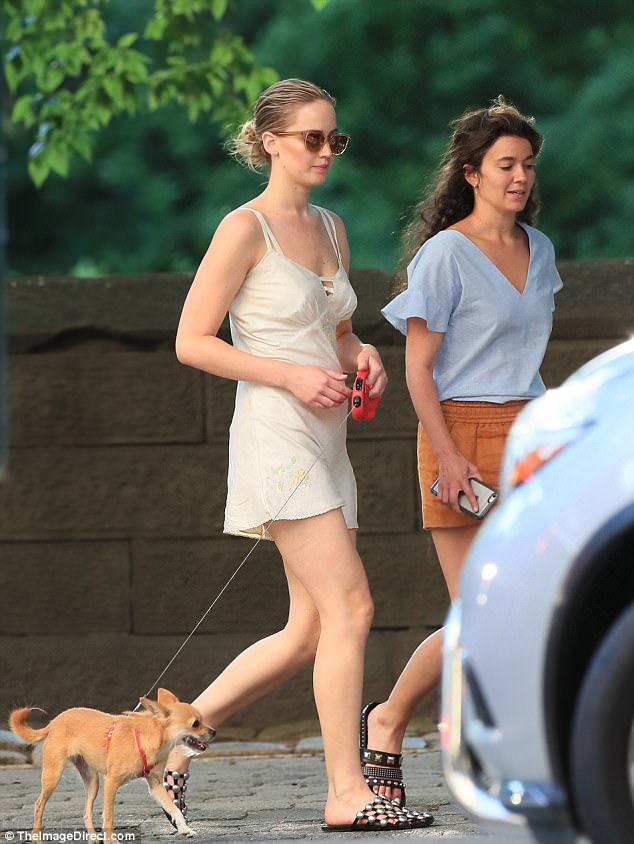 She explained: ‘You might think you know me, but when you approach me you’re a total stranger to me and I’m scared.

[I get] very protective of my space. It took me a long time to be able to do that. ‘If I’m eating dinner and somebody comes up and a flash goes off from someone’s iPhone camera, I am really rude to that person. Then other people at the restaurant will see and be like, “Oh, damn, I don’t want to do that.” Privacy is a full-time job and I work very hard at it.’ Lawrence will soon be filming X-Men: Dark Phoenix as well as Bad Blood, a bio-drama about Theranos entrepreneur Elizabeth Holmes.

Seen on everyone from Behati Prinsloo to Chiara Ferragni, Alexander Wang’s ‘Amelia’ sandals are so popular that Jennifer’s leather pair aren’t currently available to buy. The good news, though: you can bag a similar suede pair by clicking the link to your right! Featuring all-over studding, a caged outer and flat sole, the Amelia sandals are a cool take on classic summer footwear. Not quite a sandal but not quite a shoe, we love how these sandals add an edge to Jennifer’s otherwise girly get-up!

If you don’t fancy dropping so much money on your go-to SS17 sandals, why not check out our lookalikes from the carousel below: 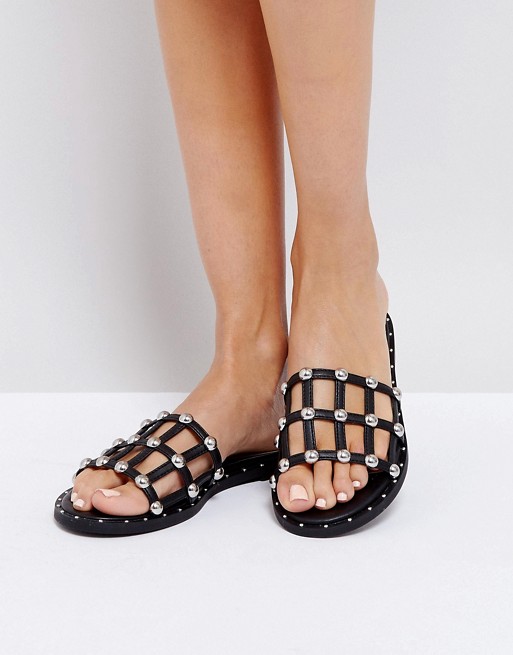 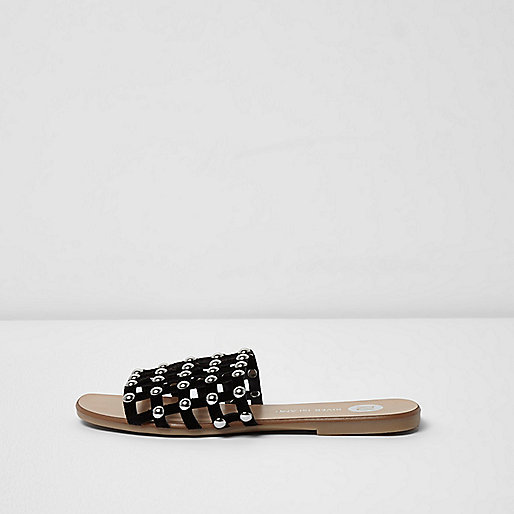